Austin is the state capital of Texas and is known for its eclectic live -music scene, keeping it weird and lip smack’n BBQ. Austin also has a rich heritage in motorsports, just south of the city Formula 1, Moto GP, Xgames and Moto America SuperBike have all taken place at the world-renowned Circuit of The Americas. This year Austin got to see what it's really like to get weird on a motorcycle, as the parking lot of the Austin American Statesman was transformed into a TT race course. The Handbuilt Custom Motorcycle Show played host to round three of the RSD Super Hooligan Handbuilt TT presented by Progressive and powered by Indian.

There’s a saying in Texas “if you don’t like the weather in Texas, wait a minute.” We got to experience what they mean first hand as we prepared the vacant lot, the Friday before the race, under pale blue skies and a 74-degree breeze. The conditions felt prime for two-wheeled bare-knuckle brawl scheduled for the following day. Unfortunately, mother nature had other plans and unleashed a spring squall with blistering downpours, powerful 40mph winds that turned EZ ups into parasails, strewn brand-new banners around like streamers and pushed the course marking water walls and bicycle fence into a course shape more to her liking. After the 90-minute deluge, the Super Hooligan crew was hard at work re-resurrecting a suitable course to get sideways on, the wind was still a huge issue throughout the day but at least the rain stopped, and the sun came out and dried up all the race lines.

At 3:10 pm, a little behind schedule due to weather, the Super Hooligans got their first look at the Handbuilt TT for qualifying practice. This is the first TT of the year, a unique course on pavement blending left and right turns with two jumps over grass islands that divided the parking lot during normal operational use.

Joe Kopp came out swinging pushing his Triumph Street Twin to a best time of 11.265 besting Andy Dibrino’s, Dunlop backed Indian FTR rider Jordan Graham, #88 Jimmy Hill, and Vance & Hines supported Frankie Garcia. Qualifying would determine Super Pole running order which would then determine where the riders would line up on the grid for their heats.

Super Pole allowed each rider 4 laps with a clear track to put down their fastest time. Andy Dibrino took his brand-new race prepped KTM 790 Duke and set a very respectable time of 11.045 securing him a spot in the Dunlop Dash for Cash and first grid position in his semi. Dibrino was followed by Kopp (11.121), Garcia (11.144), and Graham (11.266). Mustache connoisseur Jimmy “Hillsack” Hill was on the gas during his Superpole session aboard his Motul backed FTR 1200 but got a little greedy with the front brake and ended his day with a bum knee.

Semi 1 saw close racing with Andy Dibrino, Frankie Garcia, and Jordan “Cornstar” Baber all vying for the top position and ensuring a much-needed stating position at the front of the field in the main. Dibrino showed once again that he had what it took and proved the new KTM has what it takes to capture wins handily fending off the hard charges by Garcia and Baber.

Past AMA Pro Flat Track Grand National Champion Joe Kopp had the start dialed in semi number 2 which helped him sail to an uncontested victory, Indian FTR riders Jordan Graham and AJ Kirkpatrick kept him honest though and proved their RSD Indian FTR1200 builds have what it takes to be front runners, with Jordan Graham besting Dibrino’s time from semi number 1. Super Hooligan newcomer, and the youngest hooligan in the field, David Kohlstaedt turned a lot of heads showing up on an XG750 Harley-Davidson modified by David’s dad David Kohlstaedt Sr. and Steve Huff from Huff Motorsports; Kohlstaedt aboard his affectionately named “Huff-sqvarna David & Son”, road fast and smooth securing a 4th in his heat and proving he has what it takes to mix it up with the seasoned hooligans.

The best times from each rider in their respective semi’s determined grid selection for the 4 lap Dunlop Dash for Cash. Kopp had the fastest time followed by Garcia, Graham, and Dibrino in that order. Kopp got the jump on the field, but Graham had his Dunlop’s hooking up, launching from third position to second and showing Kopp a wheel every chance he got. Graham eventually ran out of laps and Kopp got the win an extra $500 for the BBQ fund.

Before the mains got underway, our friends from Super73 hosted an electric bike exhibition race with equally prepared S1 models. The same model used for the custom RSD build currently on display at the Petersen Museum. Roland tapped a few of his friends attending the Handbuilt show to throw a leg over the Super73 and get a real hooligan experience. X games medalist and sometimey racer Tyler Bereman , The Great Frog Jewelry store owner and mega babe Imogen Lehtonen , Sport Bike Inc editor in chief Allan “Mr. Black Moses” Lane , Supermoto expert and savage sweetheart Nicole “Spicoley” Pitman , Motorcyclist, Cycle World, HotBike contributor and former child supermodel Morgan Gales and Tattoo canvas, Vlogger, 2% er and fire extinguisher tester Sean McDonald . Starts were tricky on the Super73’s with some of the riders going just for the electric throttle, some riders used peddles first while others opted for kick-push skate style start, ultimately is was Bereman to the front followed by Nicole Pitman, Morgan Gales, Imogen Lehtonen, Allan Lane and holding down the rear Sean MacDonald. Tyler has slowly but surely been making his way back from an FMX injury in November, but there was nothing slow or sure with the heaters he was putting down lap after lap, Sean, after a dismal start, started figuring it out an put some hard-charging laps picking off Mr Black Moses and Imogen, Moses unhappy with his trip backward looked to make up some time over the second island jump, but an ill-timed maneuver saw Lane take a tumble through the grass, as Lane was gathering himself back up Imogen was approaching the same grass jump, she tried to make room, but ended up clipping a handlebar and taking a water wall to the midsection, both riders were unscathed and able to rejoin the race. Bereman had it all but in the bag, until he started to celebrate a corner too early allowing the crafty Pitman to put her head down and barely edge out the Red Bull-backed Bereman. Final results would go, Pitman, Bereman, MacDonald, Gales, Lehtonen, and Lane, with Pitman taking home a brand new Super73 for her efforts.

Following the Super73 races, the mains were ready to get underway. Coincidentally Nicole Pitman's husband Parker Pitman took home the top spot in the Supermoto main. The Kuryakyn “Run What Ya Brung” class had a hodgepodge of bikes line up from knobbied motocross bikes to plated street bikes take the line, Michael Gregory aboard his bone stock Ducati Scrambler lead line to line. Jeff Bonifas (from Colin Edwards Texas Tornado Bootcamp) was the quickest in the Mad Dog mini bike race.

The Hooligan amateur main presented by J & P Cycles is quickly becoming as exciting as the Super Hooligan class. The AM class had the Daytona round off, so the racers were chopping to get after it in the main especially two very fast females, the J & P backed Indian Scout rider Jolene Van Vugt and Stephine Pietz. Van Vaugt and Pietz both had a tough road getting to the main with Pietz losing her exhaust of the first jump during a qualifying session and having to borrow a bike for the main and Van Vugt literally banging bars elbows, legs, and tanks to secure her way into the main.  Michael Gregory again was able to put his stock Ducati Scrambler to the front besting Rich Silva and Carlos Sanchez.

LCQ honors went to Alex Smith as he edged out Jim Ottele for the last spot in the Super Hooligan main.

As the sun dipped behind the Austin skyline and the bats began to emerge from the South Congress bridge, the winds that had blown pestering the event banners and posters became still. The 15,000 people that circulated through the Handbuilt show throughout the day now all seemed to be hanging on the fence trackside waiting for the Super Hooligan main to begin. There was a collective deep breath as the start lights turned from red to green unleashing a hooligan stampede in downtown Austin. Joe Kopp had the best reaction time scoring the K&N Holeshot award with Dibrino, Garcia, Graham and the Russ Brown Motorcycle Attorney’s machine of AJ Kirkpatrick. The top 5 seemed to immediately fall in line, while the battle from 6-13 was an all-out war Josh Sleigh swapped spots with Chris Mcdougal while Jordan Baber and Tony Alves when at each other. On lap # 8 tragedy struck with Dibrio snapping the chain on his brand new KTM forcing him all the way out and gaining no points. Kopp would hold on the last 4 laps securing his 3rd win in a row and putting him 28 points, ahead of Dibrino in the championship. Frankie Garcia snagged 2nd holding off the hard-charging Jordan Graham who had the fastest lap of the race for 3rd. AJ Kirkpatrick had his best finish of the season in 4th. Jordan Baber’s day ended with a broken finger and a boxing match in the pits after a hard pass by Tony Alves, who secured 5th

Check out the current 2019 standings HERE

KURYAKYN RUN WHAT YA BRUNG

While arguably the best two-wheeled road racers in the world took center stage at the Circuit of the Americas the following day at MotoGP, those in downtown Austin on Saturday afternoon, got to come to one of the most prestigious custom motorcycle shows in the country and watch modified street bikes battle bar-to-bar, up close and personal on a custom built track with skyscrapers in the background. A grassroots spectacle of man and machine.

What is better than hanging out at the Handbuilt show during the day then stepping out back, grabbing a beer and watching Round 3 of the Super Hooligan National Championship. Roland and the team from Handbuilt designed a great TT style track in the heart of Austin, TX. 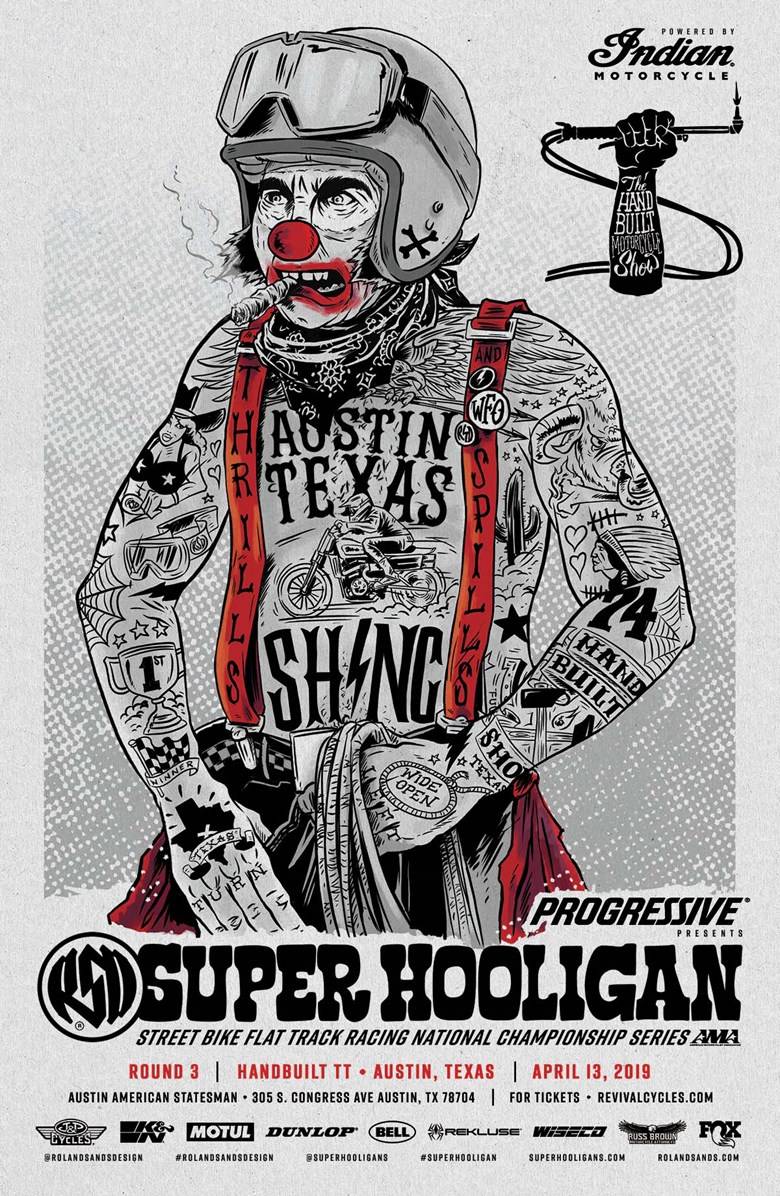