Costa Mesa Speedway hosted the penultimate Round 9 of the Super Hooligans National Championship, and it was a race just about everybody looked forward to. Mostly because it’s right in our back yard – well, maybe not for all of us… “Maniacs on Wheels” is what the RSD crew appropriately called it, and for good reason, on multiple counts. First of all, unlike other rounds, this one only saw two classes race: the Super Hooligans of course, and Speedway, and I’m not sure which one you have to be crazier to do.

On the one hand, Super Hooligan bikes are big and heavy – not exactly the bikes you want to get tangled up with and crash on. Then again, crashing sucks on any type of motorcycle – just ask Tyler Bereman. The Costa Mesa Speedway is also a super short track, and with six Hooligans duking it out in heats and 12 during the main, the track could get awful crowded, real quick. But that only makes for tighter racing and more bar banging, which, let’s face it, is more fun for both the crowd and racers. There’s nothing like a good battle to get your heart pumping and the fans on their feet.

Speedway racers on the other hand, those guys are frickin’ nuts. Though, they might say the same about the Hooligans. They’re getting completely sideways, like, to the point they start bending the laws of physics, all while never lifting off the gas. I swear I saw their rear wheels ahead of their fronts at times. Oh, and with no brakes whatsoever, mind you. How those guys don’t high-side more often is beyond me.

Sir, you need to put pants on. SIR, you NEED to put PANTS ON, yelled one security guard at Jordan Baber's dad, and she wasn't messing around. You could tell because she marched right up to him as if he'd done something worse than wearing pants that didn't reach his ankles. Mr. Baber isn't whose picture you'd find under Mr. Nice Guy in the encyclopedi that would be Andy DiBrino, though he rarely finishes last Mr. Baber, much like his son, isn’t someone you’re likely to walk up to and fuck with, especially if you don’t already know him (then anything goes), but it was either her way or the highway. So, pants it was then. Security Lady – 1, Mr. Baber – 0. Anyway, back to the racing…

In typical Speedway fashion, they cut through the bullshit, right past practice and straight into heat races. There would be no practice or sight lap to get a feel for the track because that shit is for pansies, apparently. I don’t know how those guys sit with balls so big. Then again, the Super Hooligans are ready to throw down anytime, anyplace. So, what could possibly go wrong?

Six Super Hooligans line up for Heat 1. They wait for the gate to drop to charge into turn 1, where they have no idea how much traction they’ll manage to get. For the most part, everyone kept it on two wheels except for Jordan Graham and Nick Nefroney. Nick lost the front end in turn 1 on lap two and Jordan was right behind him with nowhere to go. This wouldn’t be the only time either of them would find themselves on the ground that night, either. Nick would low-side again later on, and Jordan would try his best Speedway impression, or kick-flip attempt, which ended in a high-side that ripped the brakes off Ol’47. Maybe it was a pretty good Speedway impression after all, minus the whole crashing part. Glad you’re alright, buddy. Over the course of the night, Graham raced three different bikes due to mechanicals.

With all the heat races and opening ceremonies out of the way, it was time for the mains, but not before the Dash for Cash. Andy DiBrino would ultimately win the $1,000 cash prize. Just as well I suppose, because he makes the long commute from Oregon each round, and gas ain’t cheap. On the other hand, everyone’s favorite redneck and all-around sender, Jordan Baber, (as well as Andy’s least favorite friend at the racetrack), travels all the way from Iowa for each race. I’m sure he would have liked a slice of that pie, too, but wouldn’t we all.

By this point in the night’s program, the track was totally dialed in with a nice, smooth groove, and it was time for the Main Events. Up first was the fastest slow guy race, the B Main, which would also double as the night’s LCQ, with only the winner advancing through to the A Main. Maddo had an epic back-and-forth battle with Mearl Barnett but ultimately got edged out and finished second.

Andy DiBrino, once again took the top step of the podium at the end of the night with a pair of Brad Spencers (Brad Spencer Sr. & Bradley Spencer Jr.) finishing second and third. DiBrino was on fire all night, almost lapping riders at the back of the pack, and there was little anyone had for him; even Baber, who’s currently sitting second behind Andy in the points championship. With only one round left in the season and healthy lead over Baber, can DiBrino hold on to take his second consecutive Super Hooligans National Championship with double points still on the line? You’ll have to find out for yourself in person when the Moto Beach Classic Surf City Blitz, and the finale of the SHNC season invades Huntington Beach on October 27-28.

You won’t want to miss this one!

Maniacs on Wheels!!! Get your spills, chills & racing thrills for the Super Hooligan National Championship (SHNC) Round 9 at Costa Mesa Speedway in Costa Mesa, CA. Get your tickets at the Gate or at our shop 10571 Los Alamitos Blvd. Los Alamitos, CA 90720 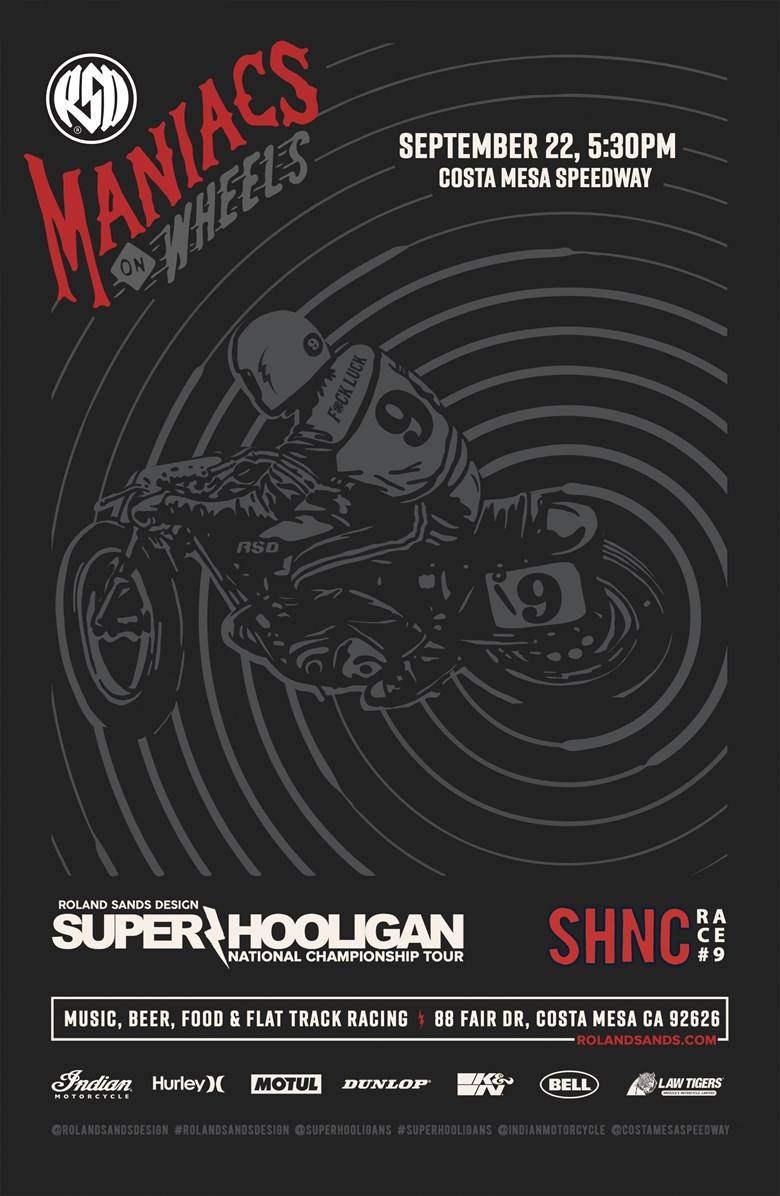