This bike started as a 883 Iron with a little attitude. Now she is the QUEEN of the streets. Redesigned from the ground up by HD of Indy, this bike will be turning heads. All the powder coating and paint shines bright like a diamond. The new Rail Collection brings contrast to the engine; while the RSD accessories bring out the aggressive street rod feel. Lighting the way is the H-D Daymaker Headlight, while the Johnny 5 taillight brings up the rear.
VOTE HERE to help them move onto the next round of the Custom Kings Customization Contest 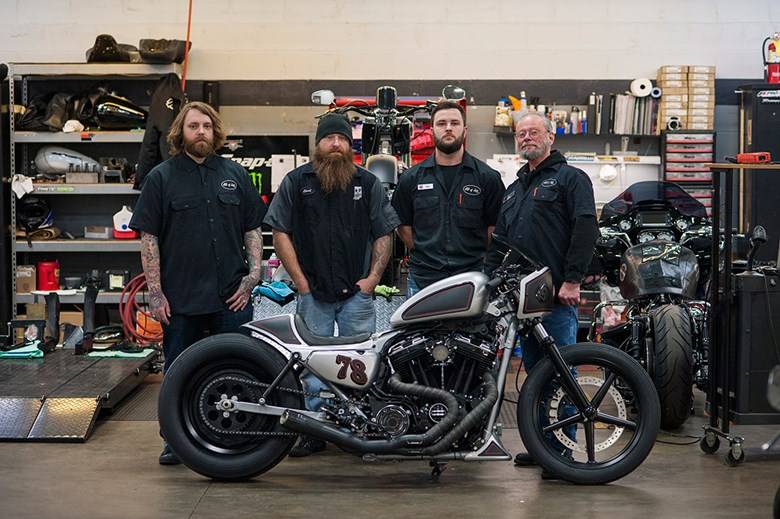 Photos by Ashley Zernicke
Have you always done custom projects?
Of course! We really enjoy taking a product that “won't fit” and making it work. Usually we customize the baggers, this time we got to step out of the box and really show off what we can do.
How many guys worked on the project and who are they?
Danny Zernicke (Team Lead)- Danny works in the P&A department. Danny is the sporty guru here at the shop and really brought a lot of ideas to the table on this build. His own personal Sportster is truly a work of art.
Nate Barnette (Co-Pilot)- Nate leads the P&A department and is known for his unique style and creativity. When it comes to custom, both Danny and Nate can create some radical machines.
Chad Wiggins (Wrench)- Chad is one of the top Master Technicians in the Mid West. When we started this build, it was tough to visualize the final product and time was not on our side. Chad did a really great job staying focused and the outcome wouldn't of been the same without him.
Dave Householder (Wrenches Assistant)- House is our service liaison guy. He really stepped up and helped Chad out when it was needed. House has a huge resume when it comes to the motorcycle industry; we were fortunate to have him on the team.
Sportster, Why?
The Motor Company had control of what bike we could build for the competition. The first Custom Kings build was done using the XG Street models. This time around we got to choose from a few XL models so we went with Iron 883.
How do you think the Sportster made the leap from “girls bike” to the HD custom of choice?
Nate- I would say the price tag. Nowadays you have Females riding Baggers and Softails everywhere you look, so the phrase “girls bike” will soon be linked to the XG models.
Danny- As long as there are big bad bikers, I don't think it will ever live down that moniker, unfortunately. But as far as being a custom of choice, they're affordable, there's a huge amount of aftermarket parts, easily customizable and they're light, fast little shits, which are all winning aspects of building a custom bike, in my opinion.
Dream Build
Nate- My dream build would be a hopped up Road King. I like simple and stripped down, sleeper! Black instead of chrome. Turbo. All go with a little show.
Danny- I have “Dream Builds” there's way too many bikes and styles for me to just have one, haha.
Whiskey or Beer?
Nate- Jack Daniels and Miller Lite. I drink them both equally and frequently. I have always been a whiskey drinker, due to my grandfather telling me it puts hair on my chest. He was right.
Danny- Who's buying? Beer for sure, but Russian water is my go to.
How do you like your steaks?
Nate- Medium Rare. I'll eat any steak you place in front of me though!
Danny- I like my steaks like my woman, juicy and pink in the middle..

Last time you were on the ground not by choice?

Nate- The last time I rode a TTR 125. The throttle got stuck but that wasn't a good enough excuse at the time for my friends. They still make fun
of me for it.
Danny- A lady on her cell phone turned in my right of way and I ended up under her car, wasn't fun, at least I walked away with only a little road rash.
Still have all your fingers and toes?

Nate- After all the dumb shit I have done, I still have all my fingers and toes.
Danny- Thankfully!

Fastest you have been on a bike and fastest you want to go?
Nate- I had a 2008 Yamaha R6 that I hit 179 mph on, according to the speedo that is. I would say I have already gone as fast as I need to on two
wheels. 200 mph would be intense, on second thought.
Danny- I think about a buck twenty. I'm not really one for speed, cruising is cool to me.
You've used a lot of RSD parts, what do you think they do for your bike?

We believe in the term “You get what you pay for”. RSD products are built to last and when it came to our bike, we wanted nothing but the best. We went with the RSD rear-sets for the aggressive riding position. The RSD Slant 2-1 not only compliments the rear-sets, it sounds tough as hell, so we were really happy with that decision. The RSD Velocity Stack gives us the performance we need and compliments the motor covers beautifully. The clip-ons and adjustable levers also gave us the riding position we were after. And finally, the cafe tail section. The tail section and seat gave us a cafe/tracker look that we all were on the fence about. We extended our swingarm six inches, so we modified the tail section to accommodate that. The drag slick flows very nicely with the tail section. The Tail Boss seat and Biltwell grips are a perfect match, RSD products are simply bad ass.