When Nitro Circus and Travis Pastrana first approached us to do this project we were both honored and horrified. Three massive jumps, heavy bikes and the already legendary and injured Travis Pastrana in Vegas in 120 degree temps attempting the most iconic jump in stunt motorcycle daredevil history, the Caesar’s Palace Fountain. The same jump that almost killed Evel. What could go wrong? A million things could go wrong and we had a million questions, but the primary one was, which bike to use? Do we build bikes from the ground up starting with a motor?, do we copy an original Evel bike?, or do we find an OEM manufacturer with a bike that is already in the spirit and modify? Obvious to anyone, Evel Knievel was an American Icon and bled red, white and blue. As a team we really wanted it to be on an American-built V twin and Travis Pastrana was insistent it be as close to what Evel jumped as possible. No motocross suspension, no v-twin shoved into a motocross chassis. It had to be built to not jump, #1 priority. Sounds like a horrible idea… lets’ do it!!! Evel jumped several bikes including Laverda (American Eagle), Honda, Triumph, Harley and Norton.. The back story behind the bikes and sponsorship goes deep. But the obvious choice of the H-D wasn’t the right fit. They didn’t have the right bike and we were going to have to spend a huge chunk of budget trying to build 4 identical bikes that were going to take the abuse of not just the 3 jumps of the day of, but testing as well. The final choice and one that made our job much easier was the Indian Scout FTR750. Evel chose to switch to the H-D XR750 when it was introduced in 1970 and jumped the majority of his career aboard this factory flat track racer of the day., so the modern day version built by Indian, although water cooled rather than air cooled, was a perfect match and weighted about the same, if not heavier than Evel’s XR. 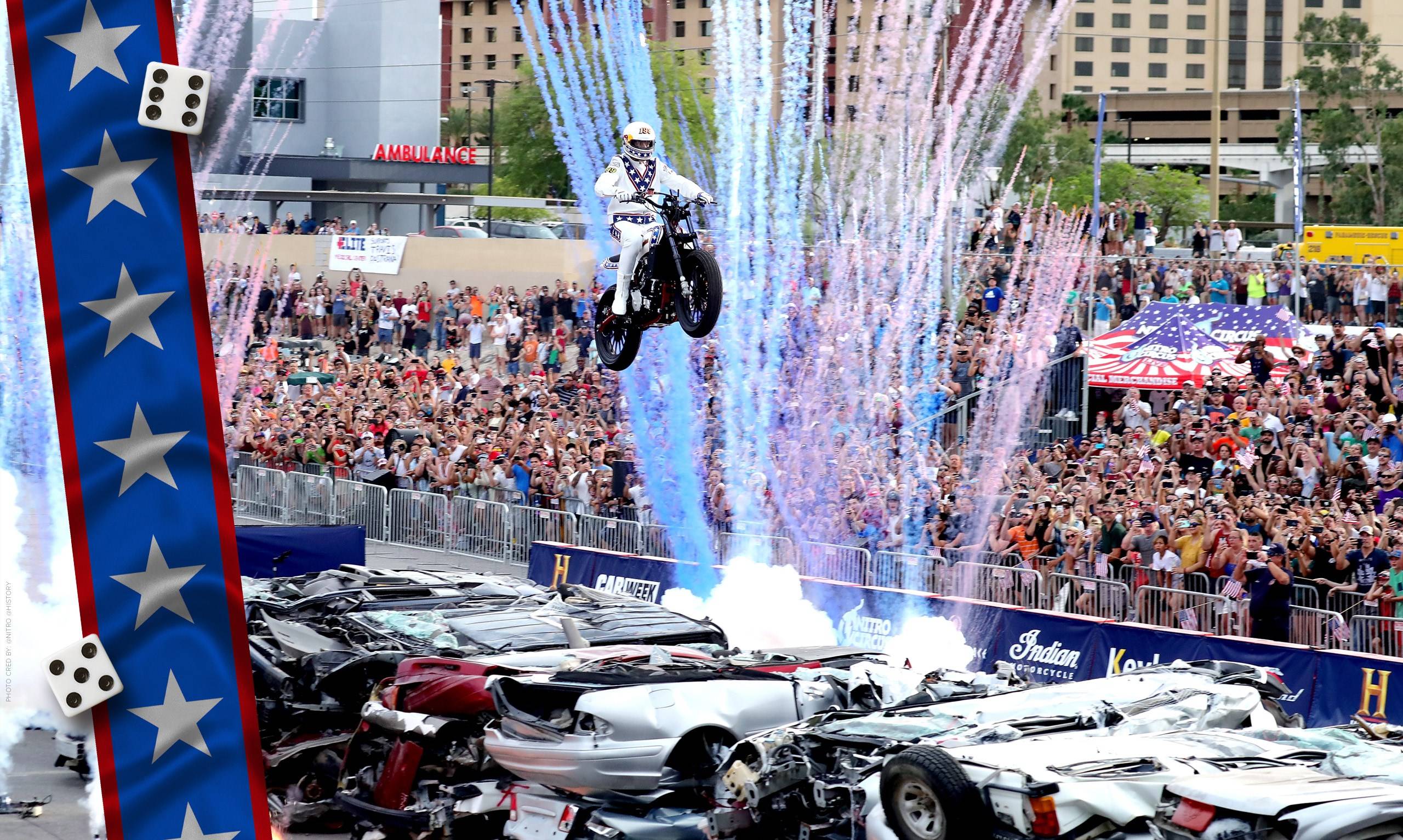 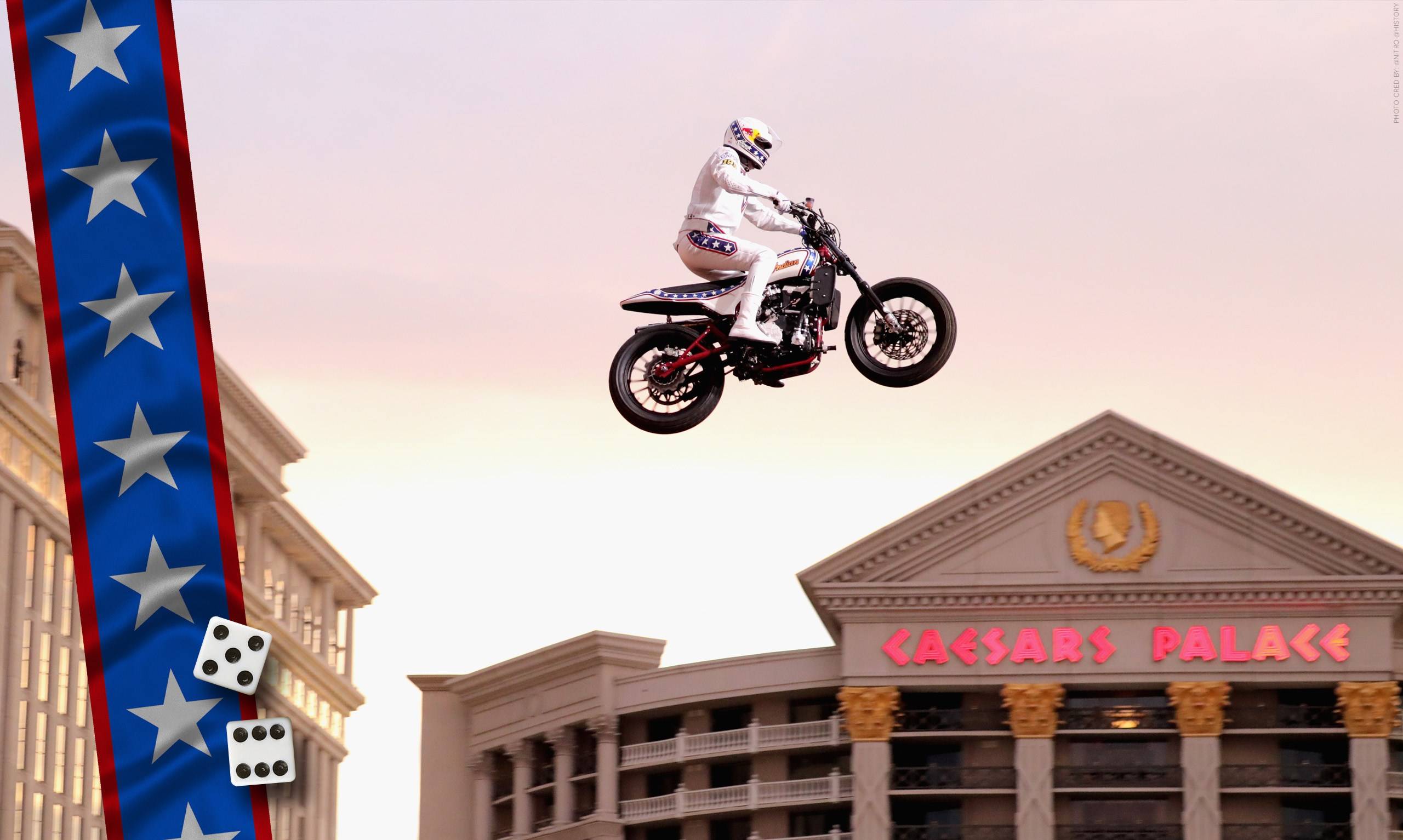 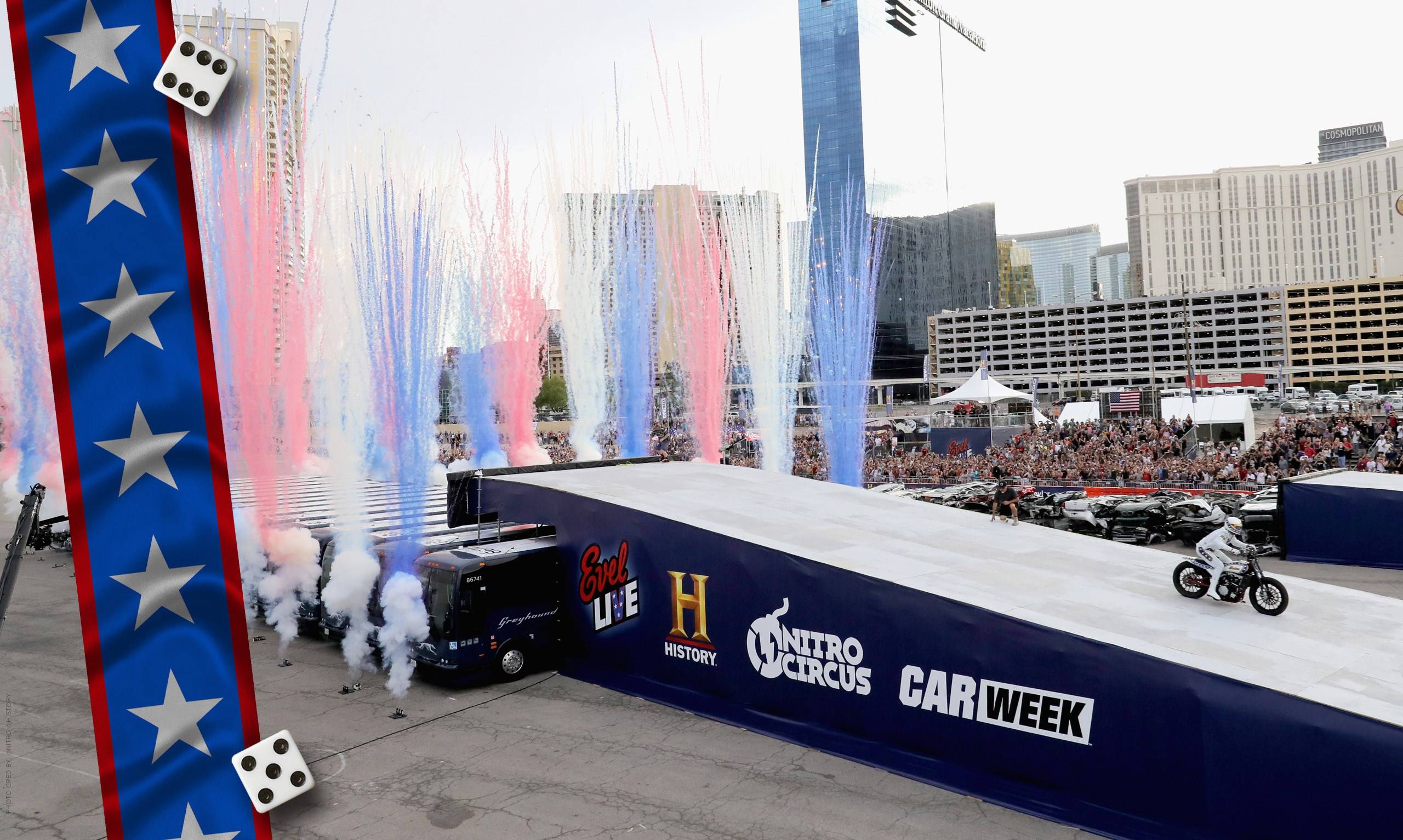 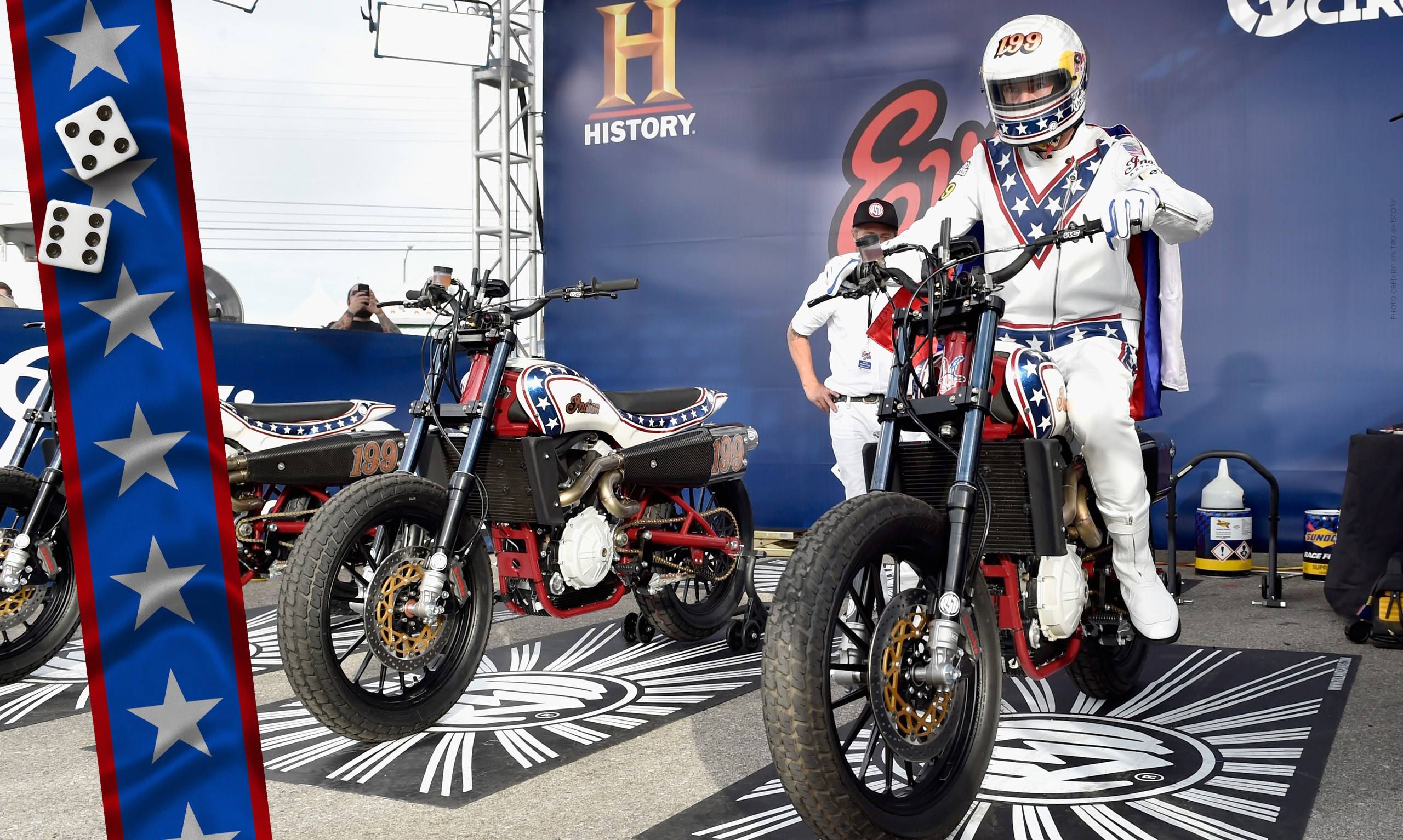 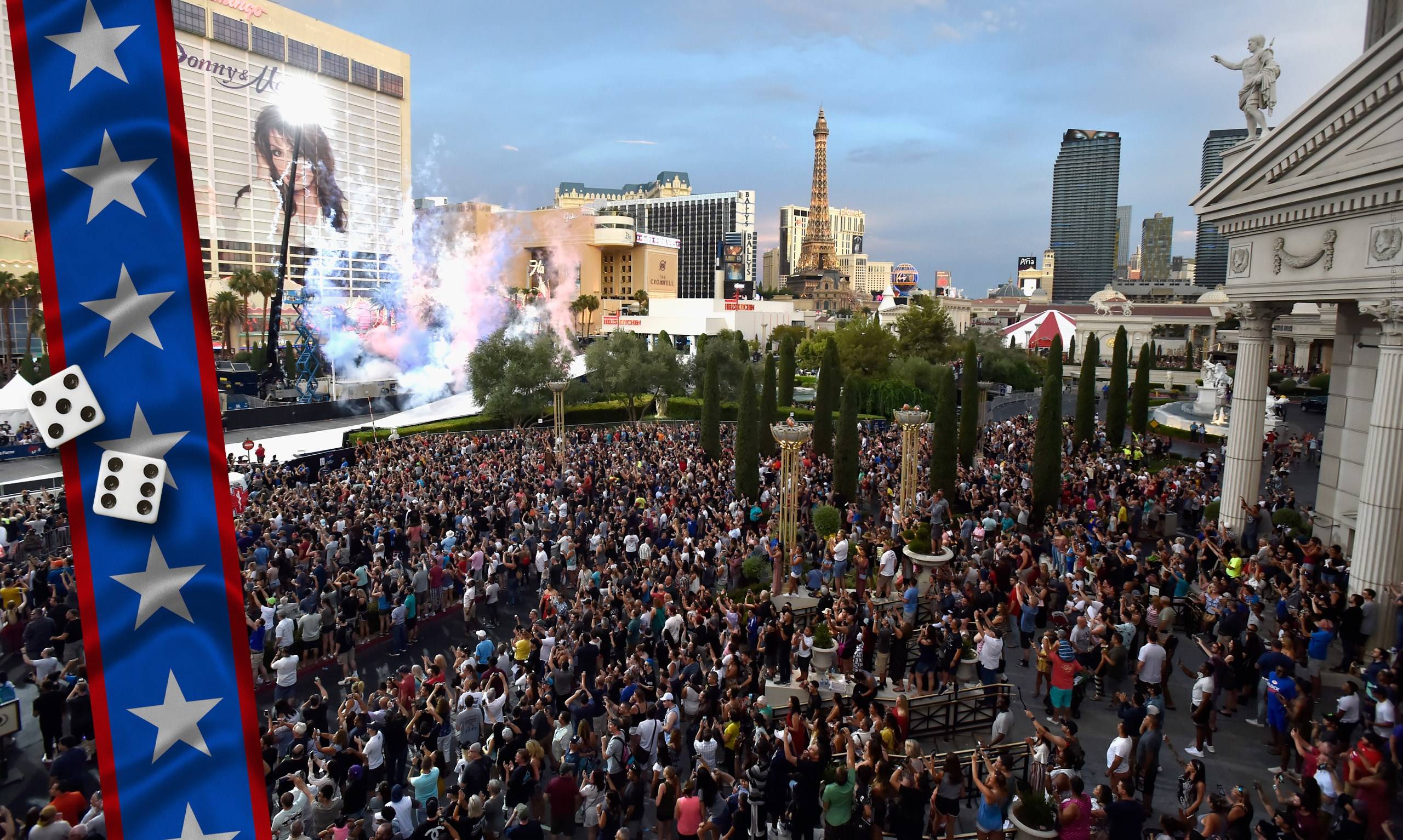 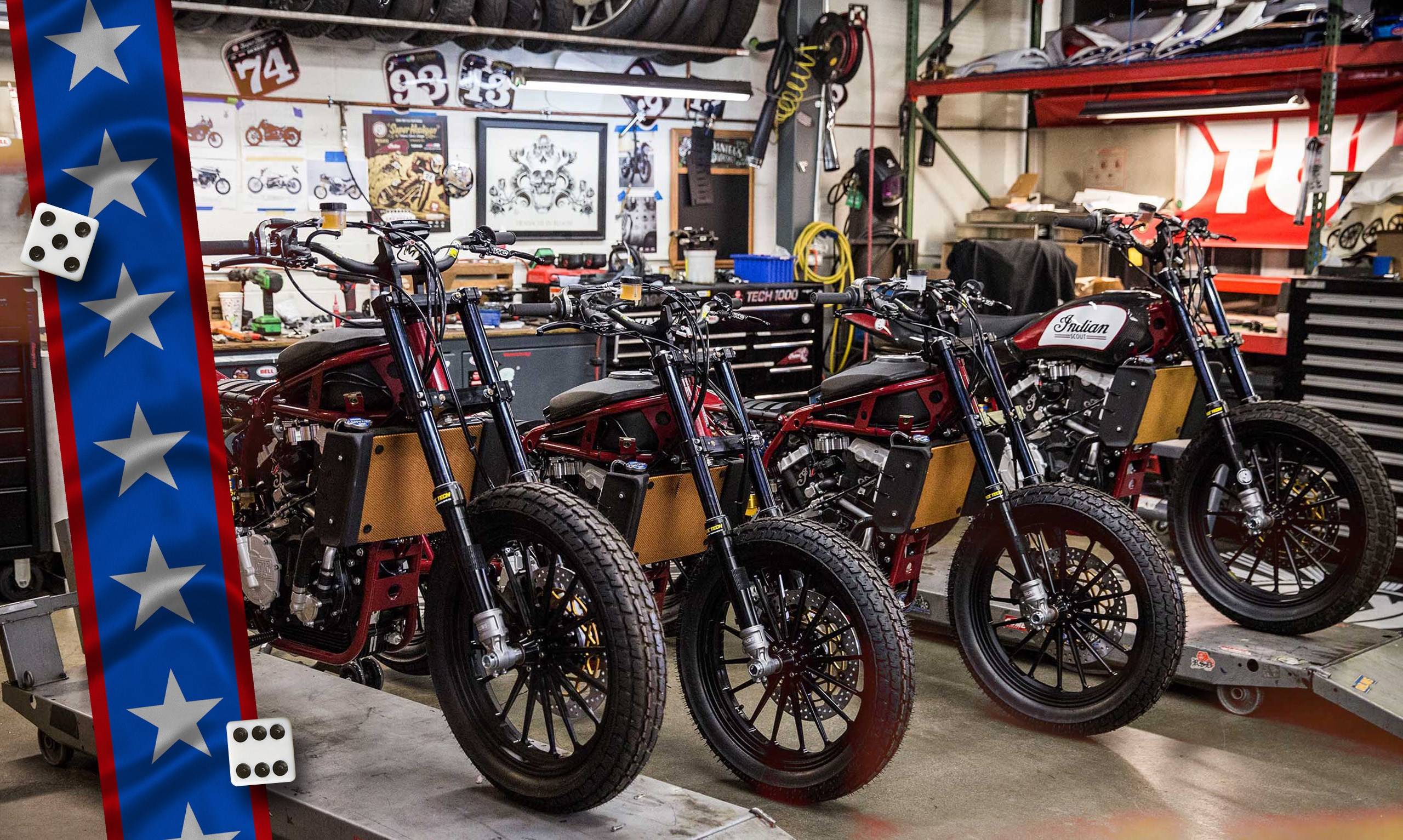 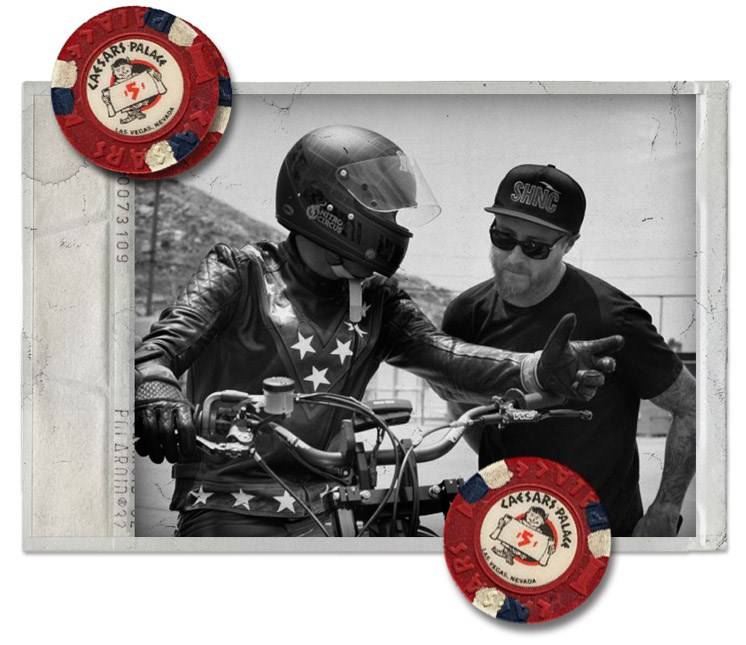 Once the decision was made to jump Indians, we had to get Travis to the shop to get him comfortable. The FTR750 comes with offset footpegs, low and wide bars and flat track tuned suspension with just 4” of travel. New bars, risers, foot controls and a custom, tall, gripper seat by Saddlemen were installed to get Travis in the right position for flying. We also replaced the stock triple clamps which are great for flat track, but a bit lightweight for a 190 foot gap. S&S supplied a stronger, adjustable offset triple clamp set up designed by Ricky Howerton for TT racing. Bonus for us is how trick the FTR is straight from the factory. The Ohlins 43mm conventional fork and shock, while definitely not MX spec, are quality units. Prior to testing we really didn’t know where we needed to be suspension wise and contacted flat track suspension guru Jimmy Wood from Race Tech who got us in the ballpark with initial settings to all the stock Ohlins components. Jimmy is also suspension tuner for Indian Wrecking Crew racer Jared Mees’, so he knows more about these bikes and suspension than anyone in the game. We switched out to a Race Tech GS3 rear shock during testing, in order to give us a way to control bottom-out resistance. The high and low speed damping adjustability of the GS3 shock was helpful, plus the additional shaft length allowed us to run a taller elastomer bumper than was possible on the stock shock. Our factory RSD Traction Flat Track race wheels come stock on the Indian FTR750. We were obviously concerned with anything that could fail but we knew the RSD wheels would withstand anything the suspension couldn’t soak up. Our confidence in wheel strength was never second guessed. From computer analyzed FEA testing, state of the art in house destructive testing lab results and real world racing experience left zero doubts on jumping with RSD directionally-forged billet wheels. We chose to not do any frame mods awaiting testing feedback. Last mod was a TT front brake set up as the standard bikes comes with no front brake.

During testing Cameron Brewer was able to play with quite a few power configurations as S&S supplied a 2-into-1 exhaust for more low end torque. Dean Young, the Factory Indian Race Team Manager was on-call with support at literally any time for tuning mods to the ECU and product support, next day air shipment, and more than anything KNOWLEDGE of what they have seen happen while racing these bikes. The unique need for the FTR to perform launches and landings showed its diversity well. This is a motor that’s built to scream at top RPM lap after lap for 25-mile main events. It’s not meant to run hot and do tire screeching launches time after time, like a MX bike. We geared the bikes down drastically with Superrlite’s new quickchange flat track race sprockets to utilize only second gear for the fountain launch, as a false neutral between first and second would of ended our night in the fountain rather than over it.  In flat track racing, after the start, you rarely ever even touch the clutch lever until the race is over. The FTR clutch packs are lightweight and took quite a beating in testing after multiple speed tests and launches, but never failed. Travis is a racer first, and knows how to get motocross holeshots, meaning that he is hard on clutches by slipping them to control traction and maximize forward drive by slipping the lever at full throttle. The fountain jump has such a short critical run up that any clutch slip could have been catastrophic. A complete fresh clutch pack was installed on the fourth of July before heading to Vegas and sure glad we did because it was blue, purple and warped! It still hooked up and felt fine but not sure if it would have had 3 more launches left in its life. 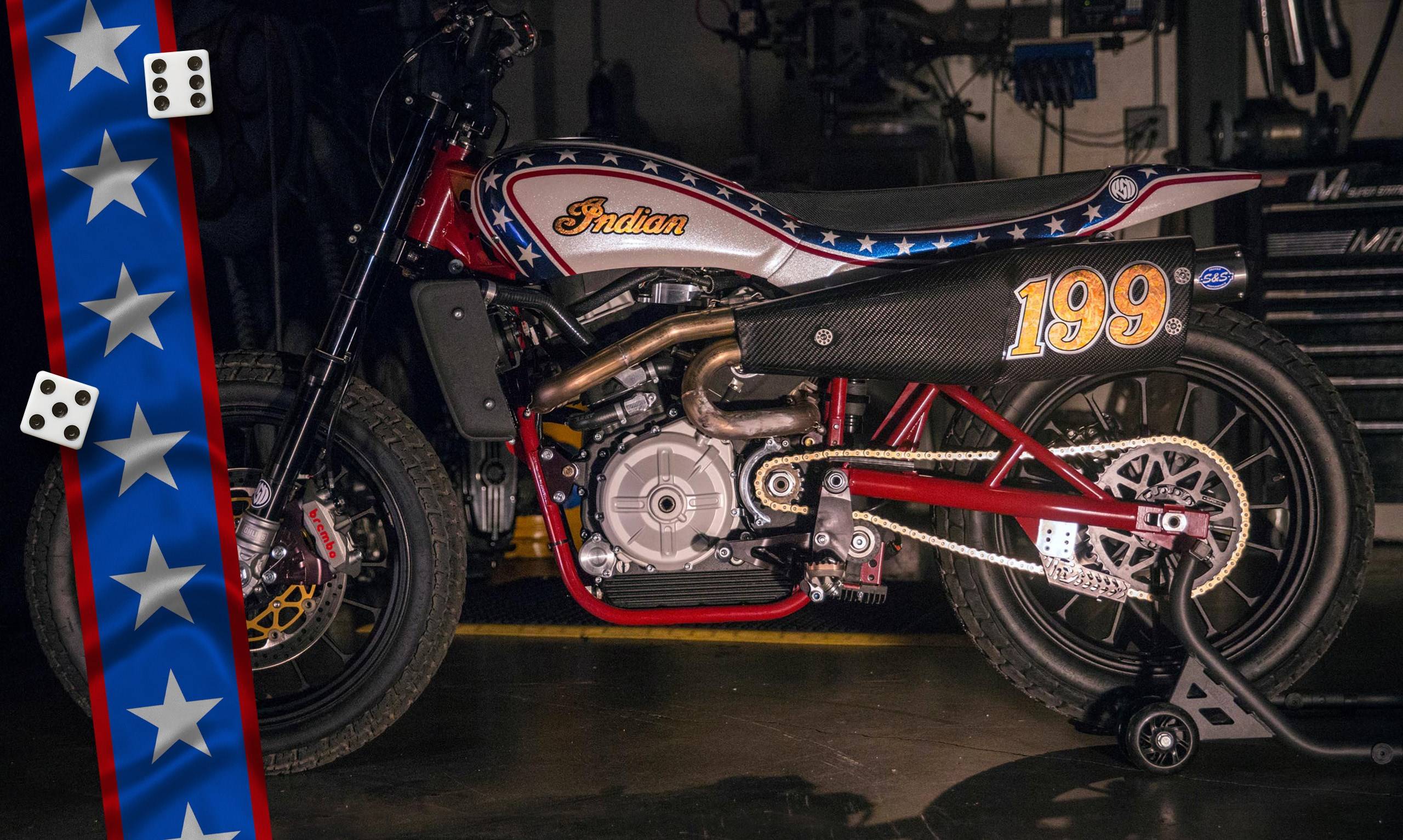 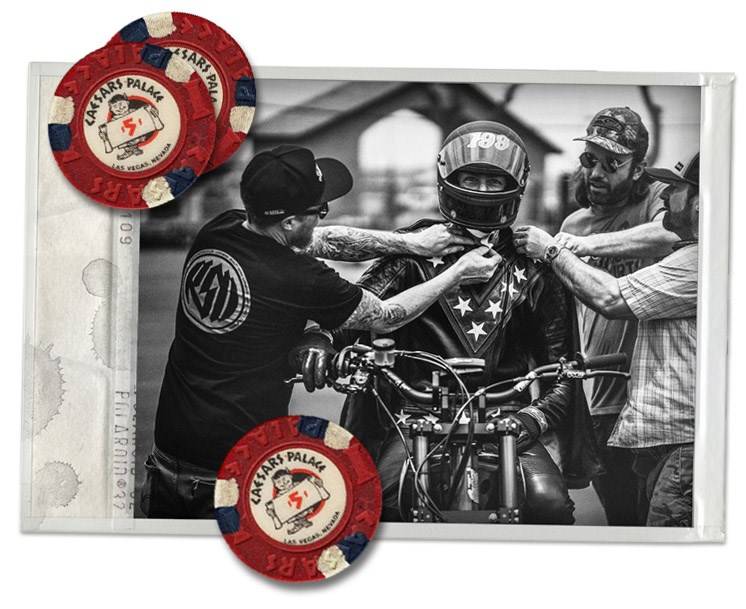 Travis did bend some swingarms in testing while searching for the correct suspension settings. The shock mount flexed and cracked the powedercoat, but did not fail. With only four inches of travel, it was bound to happen. Due to some overshot landings and suspension hard-bottoming, we needed to strengthen the swingarms and increase suspension spring rates and damping to the maximum capacity of the suspension components. RSD fabricator Aaron Boss gusseted a swingarm overnight at RSD, while Jimmy Wood made overnight modifications to the forks and shocks at Race Tech to get us where we needed to be. We crack-checked them after settings were sorted and had a jar of powdercoat pulled for the FTR750 production line and sent out to us in California.

Cooling systems were left stock outside of installing Trailtech universal fans and temp sensors to monitor engine temp. The non-expanding Evans Powersport coolant used in theses bikes stock was critical to the success of this project. With 106 degree ambient temps on jump day in the deserts, in July, we couldn’t afford to “boil over”. This allowed us to not have worry about keeping the bike cool while idling and Travis getting in position and prepped for launch. 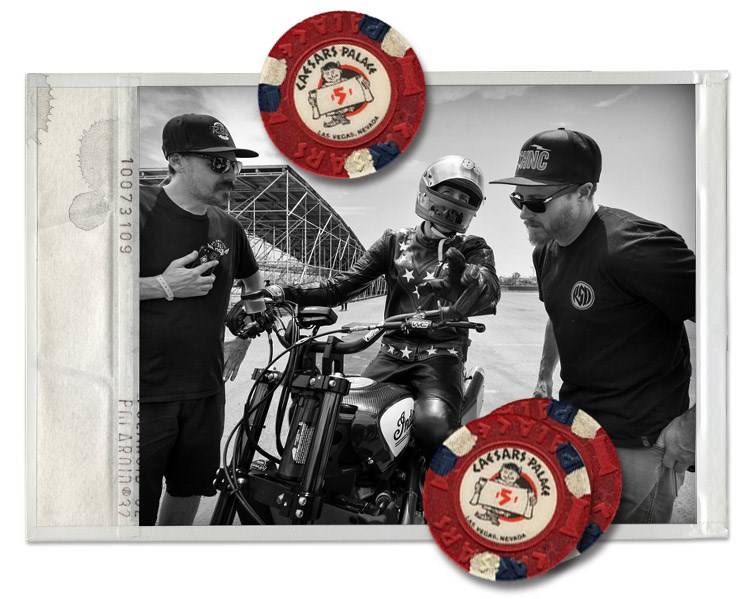 Outfitting Travis in Evel approved riding gear was challenging. Evel’s suit and helmet are iconic and we had to recreate both a black testing version as well as jump day whites. Bell helmets supplied classic Bell Star auto racing helmets to mimic Evel’s classic helmets which were painted up by the guys at Air Trix. Both Black and White versions.

The RSD apparel team built a new pant to go along with our classic Clash Jacket configured to match the Evel stars and stripes theme. Evel jumped everything in leather as he knew what hitting the asphault at 80mph from 70ft in the air can do to a person. We measured Travis from top to bottom and send out the the measurements to the RSD apparel team for a hand built suit to Travis specs. The suit was rushed through and finished days prior to the event. We healed our breath as Travis tried the suit on for the first time the day prior to the event and it fit like a glove.

Day of was reveal day. No one had seen the jump day whites yet and it was Roland’s honor to pull the sheet of the bike on live TV on History Channel. The Airtrix paint job shined in glorious white flake, gold leaf, Indian red and American Blue. Evel would have been proud. Travis jumped out of the motor home in full Evel Glory, strapped his Bell helmet on as Cam started the bike. Last minute words were exchanged between Dave Mateus and Dan Herron of the Nitro Crew, the bike was started and we sent him on his way, fingers crossed for Glory. The rest was history... 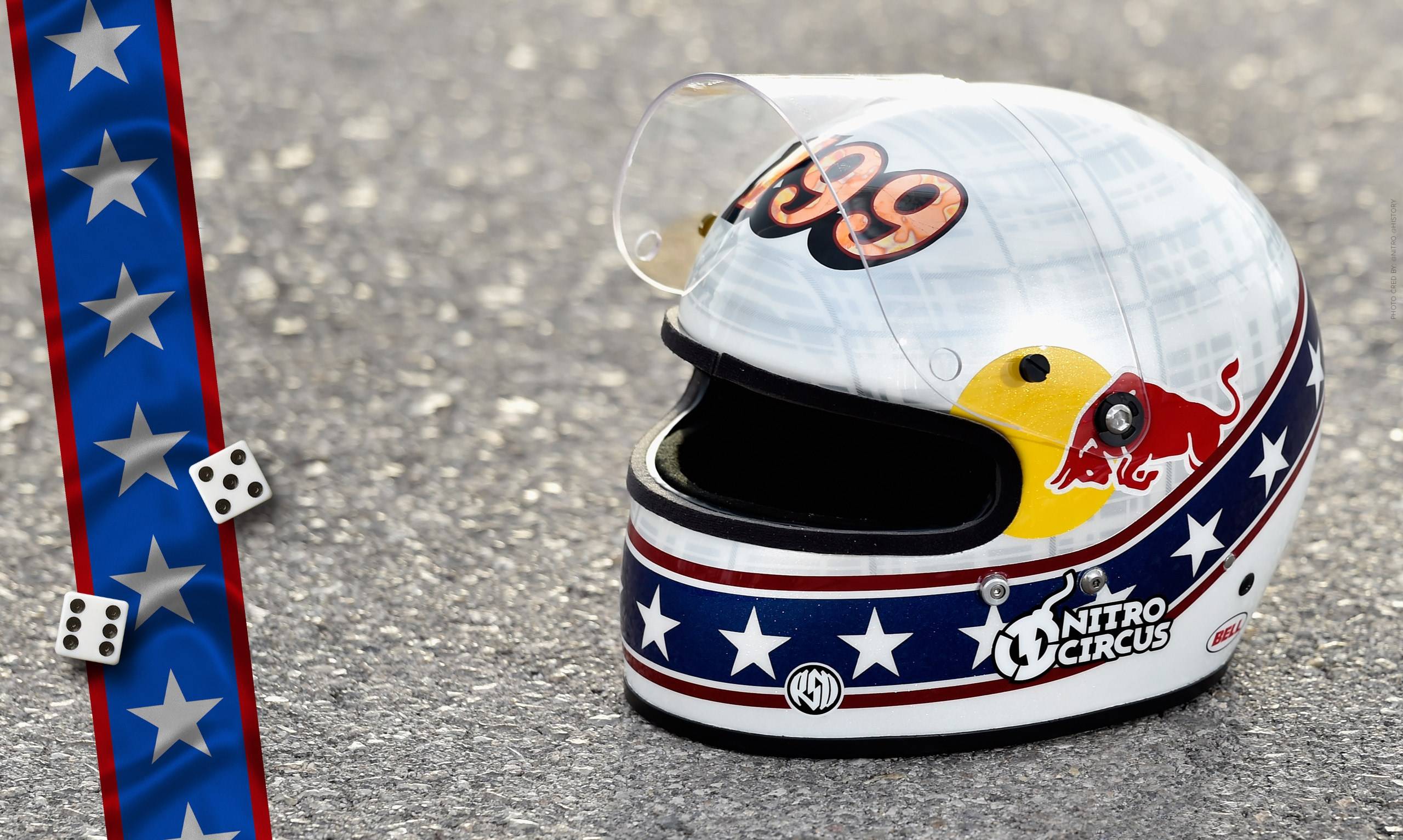 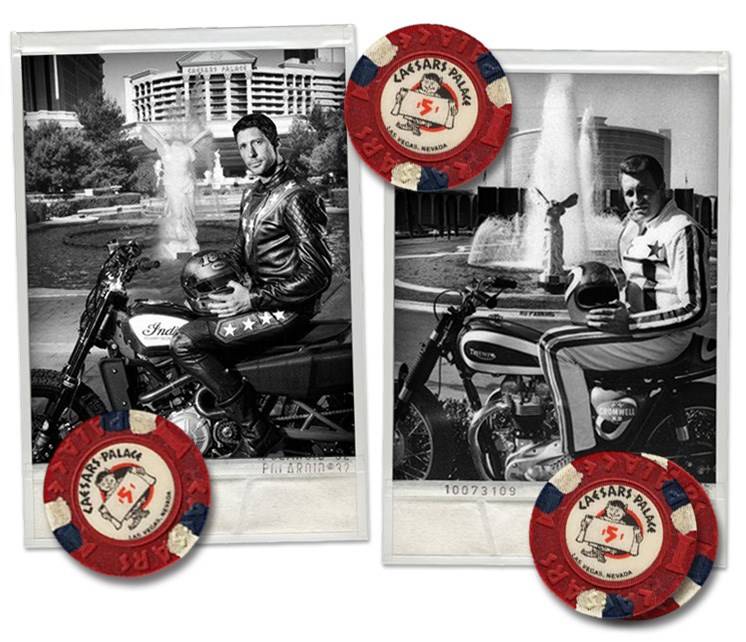