Vintage motorcycles, scooters, minibikes, and trikes are featured and showcase the similarities and major differences between the two brands. Harley-Davidson still builds motorcycles in the U.S. and abroad for over a century. Since 2011, Indian is currently owned by Polaris Industries and builds its motorcycles in Iowa. 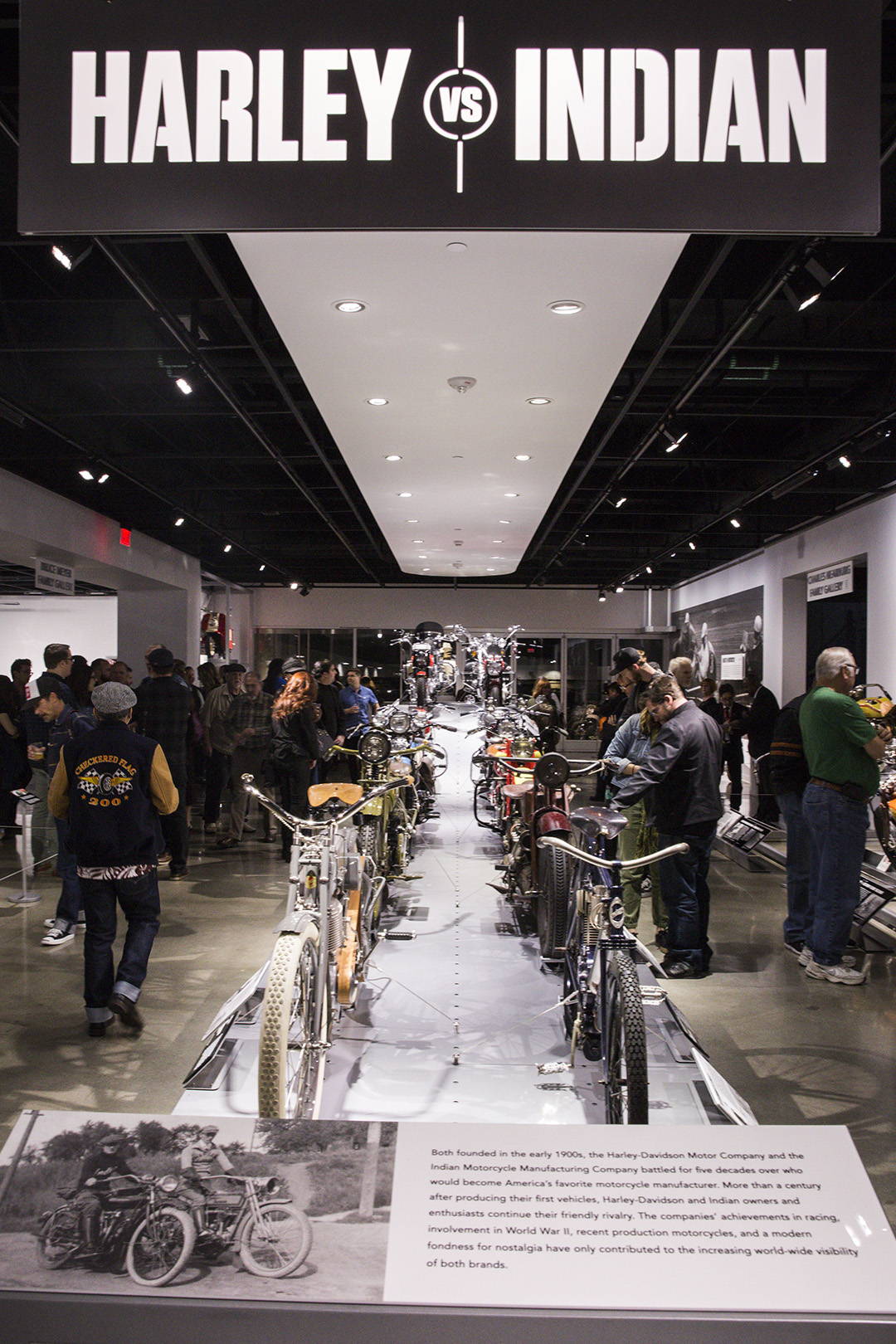 It was a full house for the reception party for Petersen’s Harley versus Indian exhibit Thursday night, a blend of industry heavyweights in the antique motorcycle world rubbing elbows with the new guard of industry influencers.

Harley-Davidson was founded in Milwaukee, Wisconsin, in 1903, by William S. Harley and Arthur Davidson. The pair’s work on a motor-bicycle powered by Harley’s 7.07-cu.in. single-cylinder engine began two years earlier, but the prototype proved too under-powered to negotiate the area’s hills. The pair’s next model used a 24.74-cu.in. single (developed with help from outboard engine builder Ole Evinrude), mounted in a loop frame similar to that used by Merkel. In September of 1904, this prototype was ridden by Edward Hildebrand in a race held at Milwaukee’s State Fair Park, and by early 1905, Harley-Davidson was offering engines and turnkey motorcycles through its growing network of dealers. 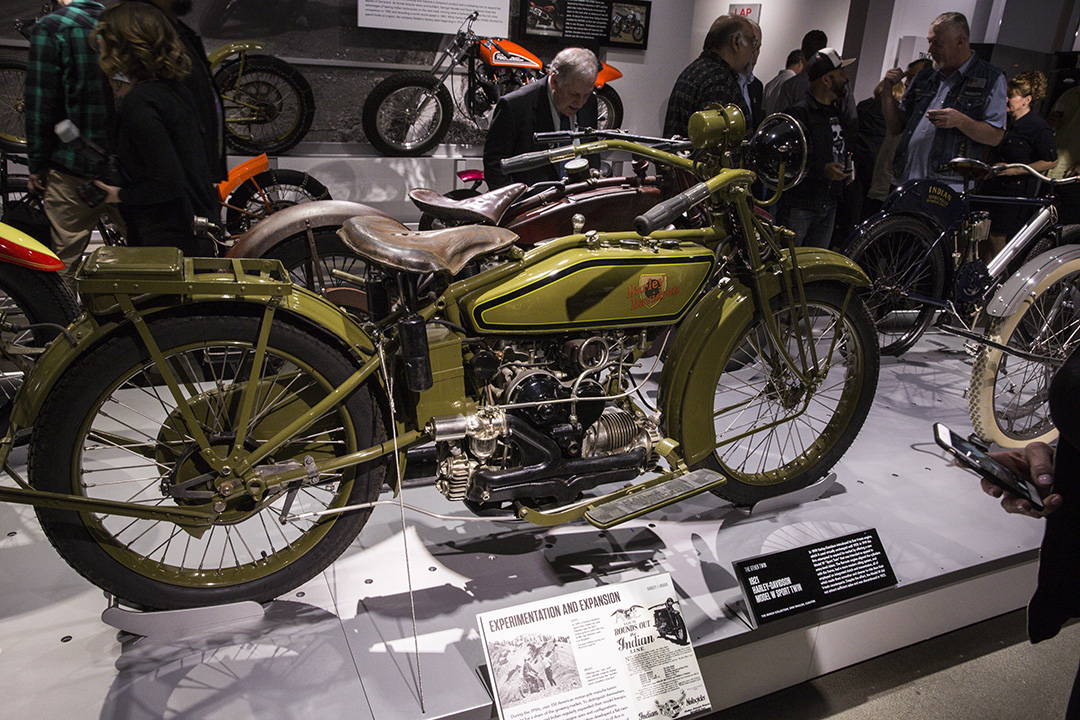 Indian is the older of the two brands, founded in Springfield, Massachusetts, in 1901, by George Hendee and Oscar Hedstrom. Both had a background manufacturing and racing bicycles, and their initial motorcycle prototype was constructed to pace bicycle races. In 1902, the first Indian Motorcycle, powered by a 1.75-horsepower single-cylinder engine (produced under contract by the Aurora Automatic Machinery Company) was sold to the public. 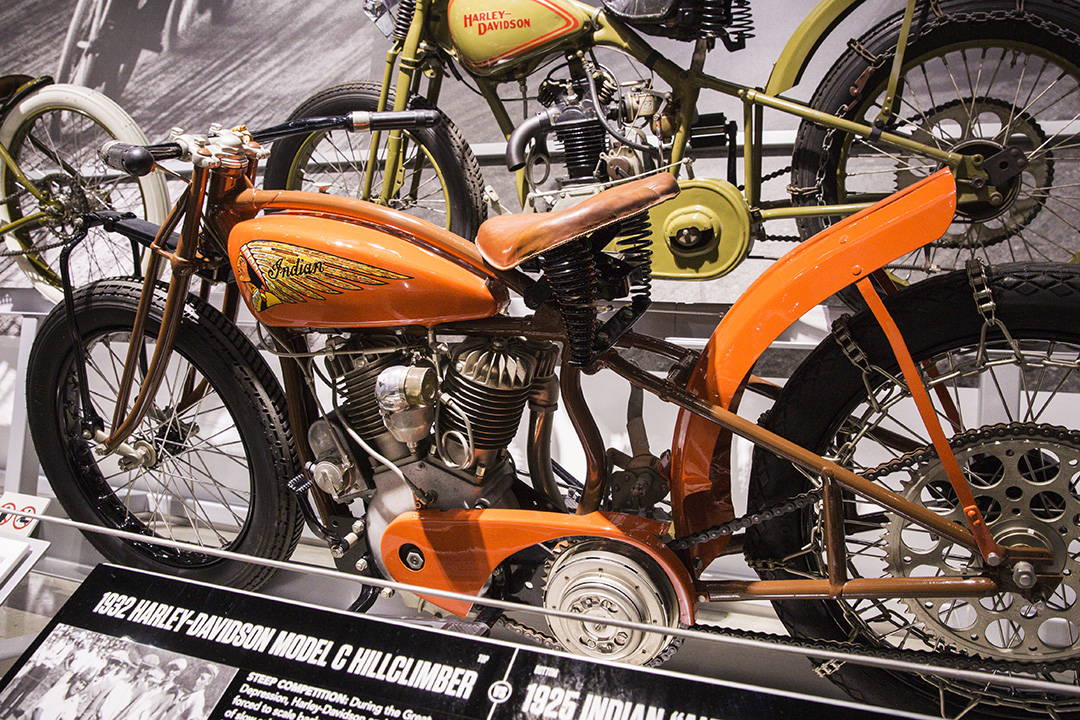 The RSD SuperHooligan Indian Scout Sixty bike will be on display until March 10th! These bikes first hit the track in November 2015. We are now proud to bring America the thrills and spills of Street Bike Flat Track Racing, with the 2017 Super Hooligan Championship Series. CLICK HERE to learn more about the Super Hooligans and the 2017 Championship series.

Our Track Chief will made an appearance as well. The Track Chief was an attempt to answer the what if's the factory doesn't have the option to manufacture. Being a one off builder has it’s advantages, primarily we get to do what we want. No committee outside our small internal group. With that in mind we set the engine on a frame table and began to create an early era driven concept utilizing modern components.

It was a full house for the reception party. Cycle World Editor Mark Hoyer led a discussion panel with guests Don Emde, MotoAmerica CFO Richard Varner and Deus Ex Machina’s Creative Director Nevin Pontius on topics ranging from who fielded the first Wrecking Crew to the symbiotic relationship between the two companies, from the sales floor to the flat track.