Garnering what was learned from Project 156, the production version of the 1200cc Octane engine was born. Canet placed well in qualifying aboard Project 156 in 2015 but was unable to finish the run only a few miles from the top of the mountain due to a fueling issue. This year, the bike’s engine cooling, lubrication system and fuel system had been massaged to better deal with the dramatic changes in the elevation of the course – particularly at lower RPM to further help Toye squirt out of the tight switchbacks.

Canet and his Empulse RR clocked a time of 10:17.813 with an average speed of 69.9 mph through the 156-turn course that takes racers from 9,390 feet above sea level to the mountain’s summit of 14,115 feet above sea level. The 12.42-mile course is split into four sections. Canet zipped through the flowing section #1 in 1:50.531, steep section #2 in 2:26.924, technical section #3 in 2:53.568 and longer, high elevation section #4 in 3:06.790.
“I think it’s a great month for Victory Motorcycles and a great month for America!” says Brian Wismann, Victory Racing Team Manager. “Imagine our brand first taking on the world’s best at the Isle of Man and achieving a podium there, then a couple of weeks later taking on the other epic race on the planet here at Pikes Peak and putting two bikes on the podium – one gas and one electric. I’d just like to really thank all of our sponsors in helping us race these bikes to the clouds in such a stellar way. Victory Motorcycles puts out a great team. I just want to let everyone know that everything we do at Isle of Man and everything we do at Pikes Peak makes it into our production bikes and that that is why we race.”

Victory Motorcycles was the only brand at this year’s PPIHC to race both electric and gas-powered race vehicles.

Have you been a fan of #TeamThunder or #TeamLightning? Fans of Victory Motorcycles were invited to visit the Victory Motorcycles website to cast their vote regarding which bike, Thunder or Lightning, would be fastest up the mountain and to register for a chance to win a Victory Octane or Victory Empulse TT. The motorcycle given away will be the bike that received the most number of votes.

Here’s the complete run down of our Pikes Peak Project 156 race day through the eyes of several members of the team as well as Rider Don Canet. Cycle World put the bike on the cover of their current issue so it’s fitting to bring the final piece of the film project with the release of the magazine. Pick up a copy on the newsstands now.
Project 156 was on an aggressive pace for a podium finish, but crashes in the second section and DNF’s at 93rd annual Pikes Peak International Hill Climb.
Victory Racing Engine Development Team
Matthew Reeves | Valvetrain
Matt Graser | Piston/Cylinder
Matt Stimpson | Build Team
Dan Gervais | Engine Build Lead
Jonathon Graus | Electrical/Control System
Derek Frie | Cranktrain
Steve Tittl | Control System/Build Team
Alex Oppermann | Project lead/Design
Joe Roltgen | Build Team
Chad Slater | Case Covers
Scott Walter | Cylinder heads
·         Project 156 qualified fourth overall out of 60 entries and top of class
·         Don Canet posted the second fastest time of the day in section one
·         Don Canet crashed in section two of the course but remounted the bike

·         Project 156 had to pull over in the fourth and final section while leading the Exhibition Class to an unfortunate DNF.

"The Racer" by Robert Pandya

On a Friday morning I got up very early to catch the final motorcycle qualifying at Pikes Peak. Don Canet was riding perhaps the most important custom bike ever put out by Victory Motorcycles. A bike that represented the heart and guts of the brand and every proud employee connected to it.

I followed Don out as he walked from the flaggers line towards the timed starting line about 100 yards away. He was by himself and fully focused. I've seen that look before. That long stare down the line. Facing the reality of traction, momentum, and equipment. Anticipating the thrill, fear and strategy needed to get to the end as quickly as possible. Facing the very personal decision to charge ahead.

I thought that Don may have been walking away to get away from the hub-bub of grid, but he was already racing...it just took me a few minutes to get it.

Don was inspecting his turn-in for the flying start - just around the corner in the photo. He was looking at gravel that may have been on HIS line. HIS line because everybody else seemed to dive in and hug the curb - but Don had a wide entry starting just feet off of the flaggers station to increase his drive towards the wire that triggered his run.

He had twelve perilous miles ahead. Miles that had claimed another racers life just days prior. That weighed heavy on all of us. 156 unique corners ahead. Many with guaranteed pain awaiting a fraction of a seconds mistake. He has a life, people who love him, people who respect and elevate him. He has a reverence for his God and an appreciation for what people do to help him achieve his goals and to somehow share in his skill and experience. With all of that, his focus was on the feet prior to the official start, an important few feet - for him.

Don gets paid to write. His stories are tight and direct. His perspective is generous of those less skilled than he. Canet has a genuine appreciation for his business and craft and the great industry we share.

But in this photo and this moment Don is what he had to be to get through the next moments in his life as quickly as possible.

Don is a racer.

Project 156 is live. It’s been a tremendous effort from many people to get this Victory racing machine ready for its first test session on the mountain. As we wait for the snow to melt and the road to clear from Pikes Peak we’ve taken what we’ve learned from testing to tweak the things we know can be better. We’ve put the final touches on the bike. Fresh K and N air cleaner is installed. Fresh set of prototype RSD race wheels wrapped in Dunlop GP-A Pro tires are mounted. Our good friends at Spin Imaging have supplied graphics. The Ohlins suspension has been tuned. Motec gauge is programmed and is ready to monitor our progress and manage the motor.

Watch Part 3 of the #Project156 build as #VictoryRacing @Roland Sands Design & @Cycle World push Project 156 to the limit at the track in preparation for 156 corners of fury and an epic race to the clouds.

There’s still some things to figure out and with a few days on the mountain this coming weekend we are excited to turn some wheels in the direction of the Summit. Don Canet from Cycle World came by the shop today to look over the finished products and try out his new RSD leathers. All is set to ship out to the team at Spyder Grips who will be managing the race effort at the mountain. Next stop Colorado.

The Victory Team pushes the prototype motor to the limit on the Dyno at their Minnesota R&D Facility to get the absolute maximum power for the extreme conditions at Pikes Peak. Built from scratch & ready to take on the mountain. #Project156 #VictoryRacing

Watch Part 1 of the ‪#‎Project156‬ build as ‪#‎VictoryRacing‬ Roland Sands Design & Cycle World Magazine bring you a prototype built for 156 corners of fury and an epic race to the clouds.

Hard at work getting everything mocked up on the Victory Pike's Peak bike! #project156

Taking back the mountain with a Victory Race Prototype Engine built from the ground up. #Project156 #VictoryRacing 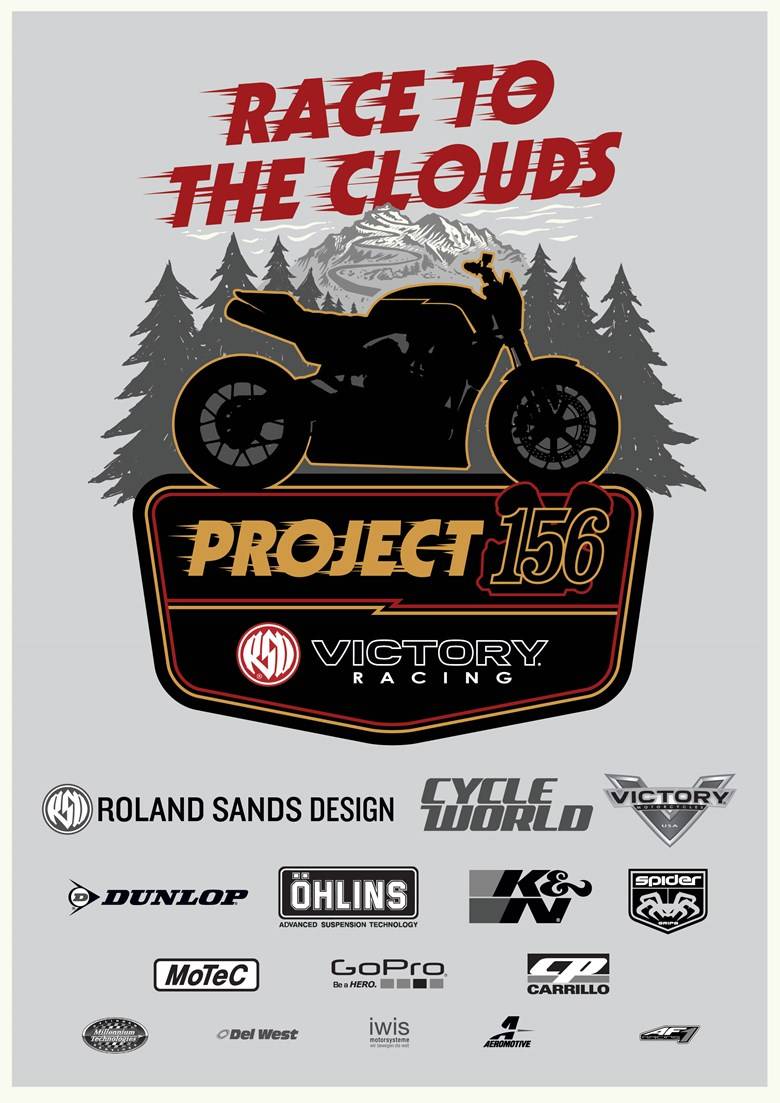 156 Corners of Pikes Peak. It’s historic, it’s grand and it’s everything about racing and motorcycles that we love and fear. Consequences on an epic scale provided by mother nature herself. Then there’s the added challenge of building a bike from the ground up including a prototype engine in a short 4 months. It’s a daunting task even for the experienced and seasoned race veteran. Join us on our journey to handbuild a prototype race bike for 156 corners of Fury as we Race to the Clouds
“Two years ago we didn’t have anything to compete with at the hill here,” says Nate Secor, Marketing Manager for Victory Motorcycles. “Now, having two of the three spots in the overall, all of our owners and all of the fans of American motorcycling should be proud. As a brand, we’re extremely proud of all of the work the guys have done on the engineering side and with the riders for putting us in this position. It is a long way to come in two years, and I don’t think anyone else in the world has a podium at the Isle of Man and at Pikes Peak in the same month. So we’re extremely proud of that and will be excited to get back here and make it happen again.”

Not only racing against time and competitors, the two Victory Racing motorcycles competed against each other in an epic gas vs. electric battle dubbed “Thunder vs. Lightning.”
×
Scroll to top