Round 6 of the Super Hooligan Championship: Sturgis Buffalo Chip T/T

" Moto Stampede at the Buffalo Chip "

Combine the Greatest Show On Dirt with the biggest and wildest motorcycle rally in the world and you are guaranteed one hell of a time. An exuberant pack of riders atop street bikes outfitted with flat track tires came thundering into the Buffalo Chip in Sturgis for Round 6 of the Super Hooligan Championship. Throttles were pinned, tires were smoked and beers were spilled in this moto rendition of a good ol’ western shootout.

The Buffalo Chip in Sturgis South Dakota is THE place to be during the legendary Sturgis Motorcycle Rally. It's basically a city of it's own where everyone camps out for the rally and enjoys great bands, motorcycle shows, entertainment of all sorts and motorcycle racing.

The Buffalo Cihp TT course was set front and center of the Chip’s main concert amphitheater. With the race being a TT, the course contained a right hand turn and since it's Sturgis, that turn went around a bar complete with rowdy party people. Also in this amphitheater was outlaw style drag racing. Basically if you had a motorcycle, you rolled up and went head to head with anyone willing to race you down a makeshift drag strip though a crowd of cheering rally goers. Rules were lax to non-existent. No helmets or shirt were required. Couples 2-up on baggers were even seen getting in on the drag racing. The setting and the throngs of people were straight up Super Hooligan. The perfect environment for this race. 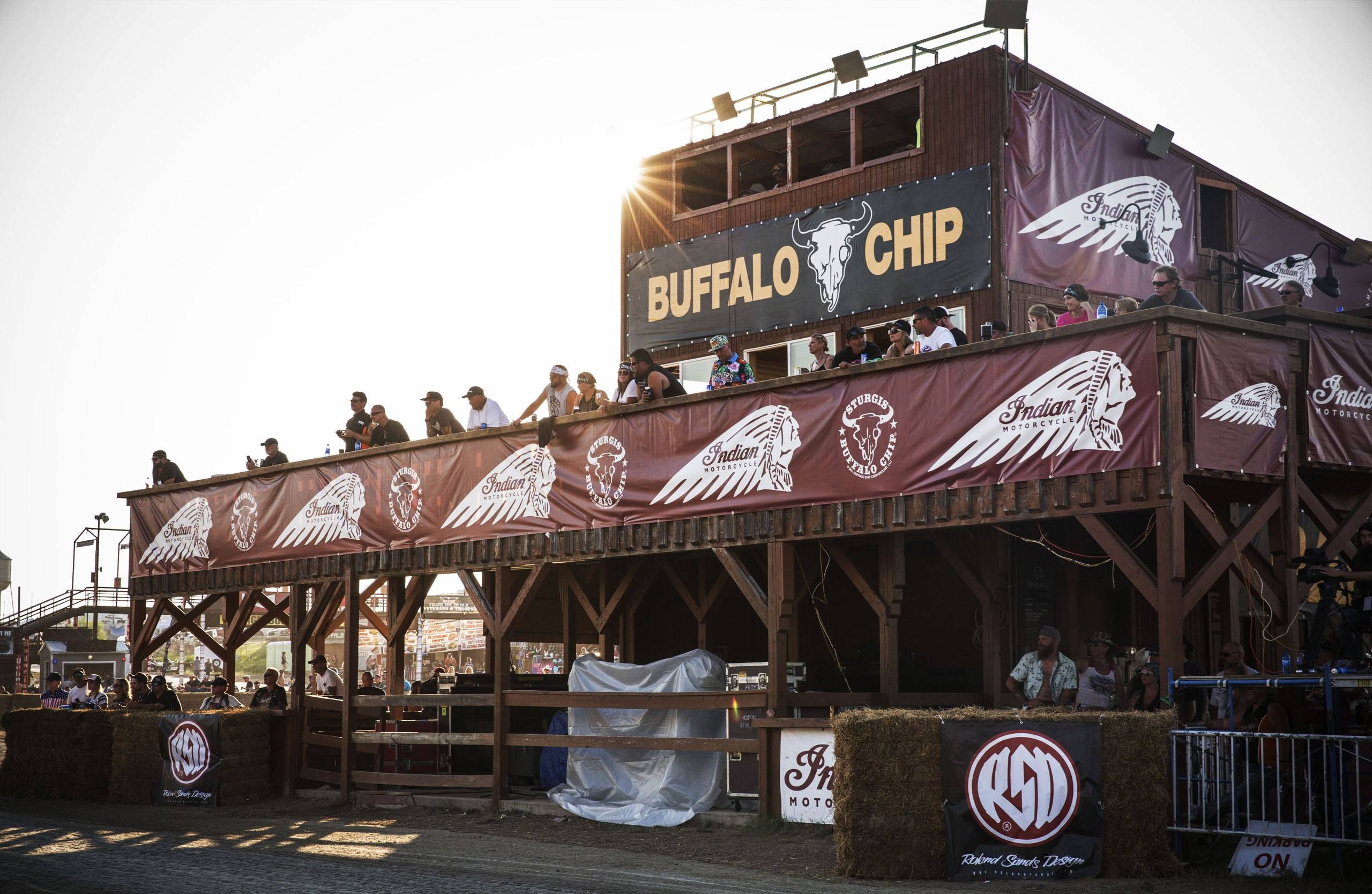 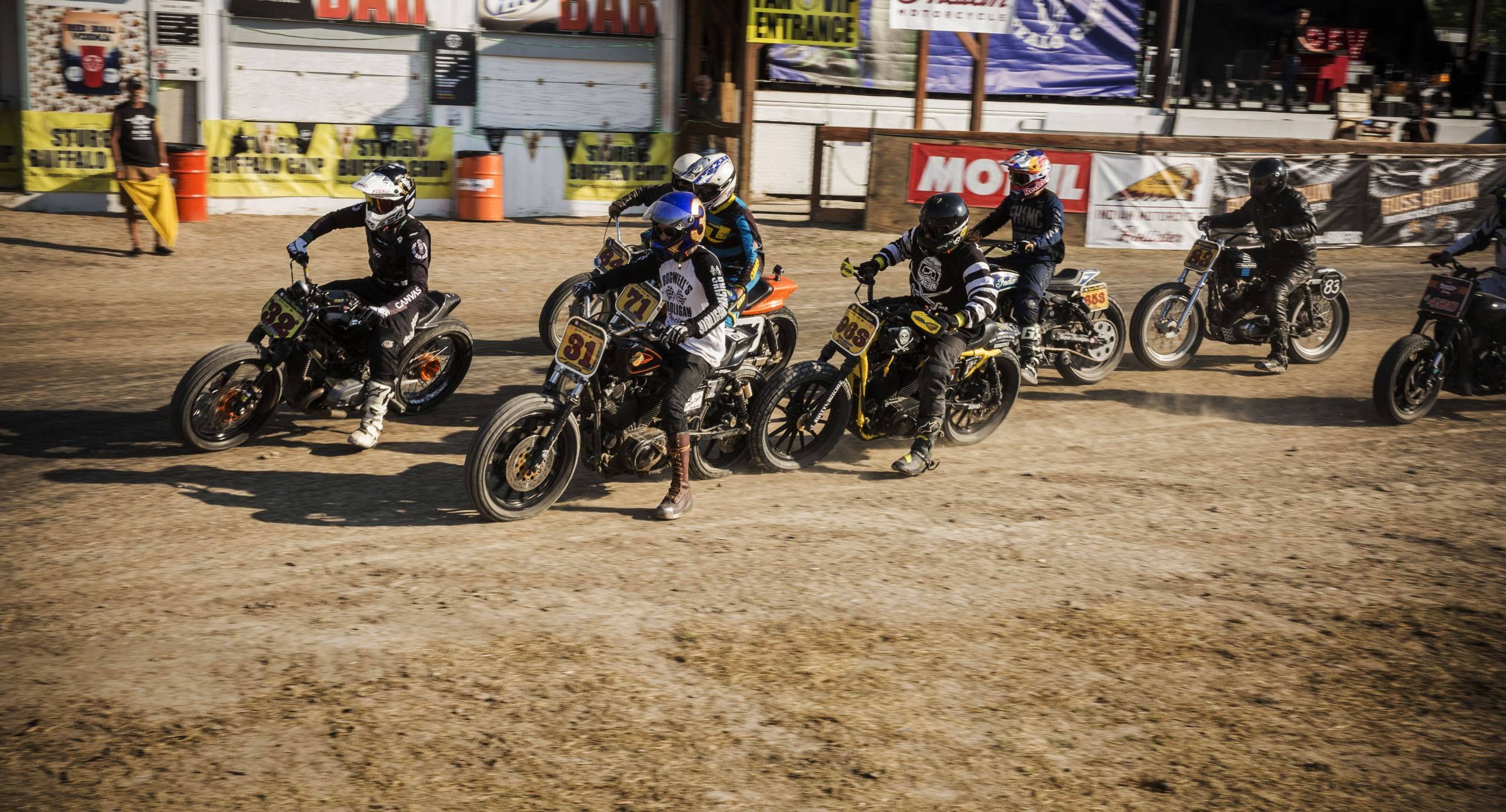 A quick roll through the pits before practice revealed quite an eclectic group of racers that came to get loose in Sturgis.

Series points leader Andy Dibrino was adjusting bars and cracking jokes but had a slight bit of seriousness to him. Andy was fresh off competing in 2 rounds of the American Flat Track series in Sturgis. He had in fact qualified for Main event in the Pro Singles class a few days beforehand on an extended version of the same track. He was primed and ready to go. Fun facts about Andy: he has a pet Zebra and is a master of all motorcycle disciplines as he competes in professional road racing and motocross races as well as his flat track endeavours.

Dan Mischler , the 2018 X-Games Hooligan race winner made the drive out from Beaver Dam, Wisconsin to get in some racing and enjoy the rally itself with some riding in the picturesque Black Hills with his girlfriend. Dan comes from a family deeply embedded in motorcycling. His Grandfather founded one of the most respected Harley-Davidson dealerships in Wisconsin and his cousin Morgen races professionally on the AFT circuit.

Jason Rodgers of Huntsville Alabama came out to Sturgis with his friend Alex in a van packed with motorcycles and peanut butter and jelly sandwiches to take part in everything the rally had to offer. This was Jason’s 5th day in a row of racing and revelry. If there was an award for having the most fun in Sturgis, it easily would have went to Jason. His constant smile and engaging stories were a testament to that. “Hooligan racing is the best thing in the world, it has opened up a lot of doors for me and I’m having the time of my life”, Jason commented about heavy bike racing in general. 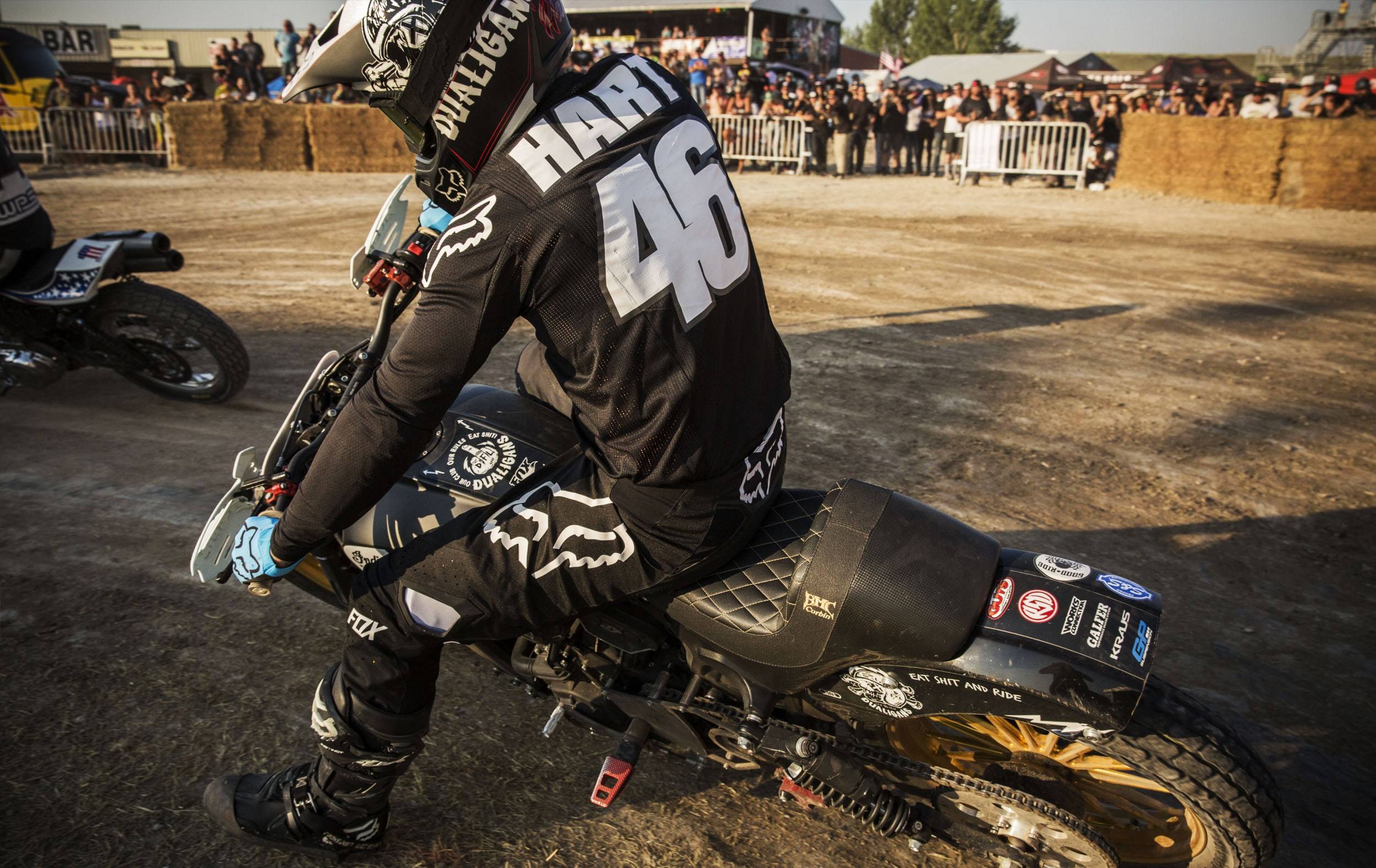 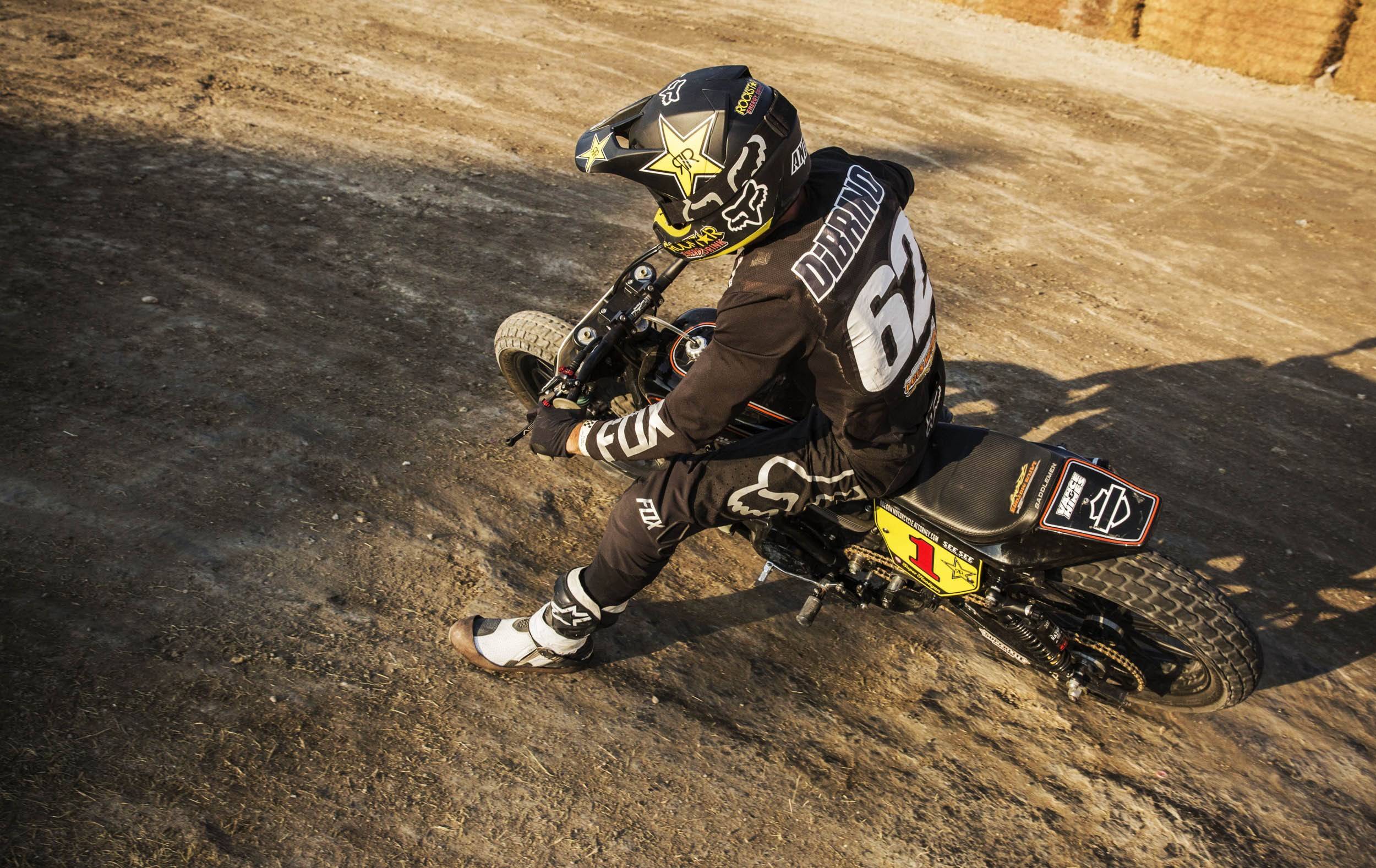 Joe Kopp, 2000 AMA Pro Grand National Champion was relaxing and having a good time in the pits with fellow racers. While still having a competitive nature, these days Joe is all about fun while still going fast.

West Coast V-Twin stunt rider Joey Robinson has been tearing up hooligan races as of late and was fresh off a win and podium finish at 2 other events during sturgis previous to the Buffalo Chip TT. The technical track conditions looked like a perfect mix for Joey’s deft throttle control. An interesting thing about Joey’s bike setup is that due to his height and rather large feet he runs forward controls on his Sportster.

Tyler Bereman, Freestyle Motocross icon, had just won a race the day before at Black HIlls Speedway so he was plenty amped and ready to continue his winning ways. At most of the Super Hooligan races Tyler races in , his dad, Randy is usually right there in the mix with him. Sometimes his Dad gets the best of him as Randy is a flat track racing veteran and guru. Often they are in the same heat race and go bar to bar which makes for some fun conversations back in the pits. Everyone should be so lucky to have the relationship Tyler has with his Dad.

Frankie Garcia a motocross industry veteran grew up racing flat track and has done road racing, supermoto and MX. Watch him ride and you can see all the various skills acquired in these disciplines put to use . It’s what makes him a threat to win at any track anywhere. Watching him ‘ back it in” into a turn is a thing of beauty. As fast as Frankie is on the track, he might even be faster making his way for a beer after a race. He knows how to have a good time. 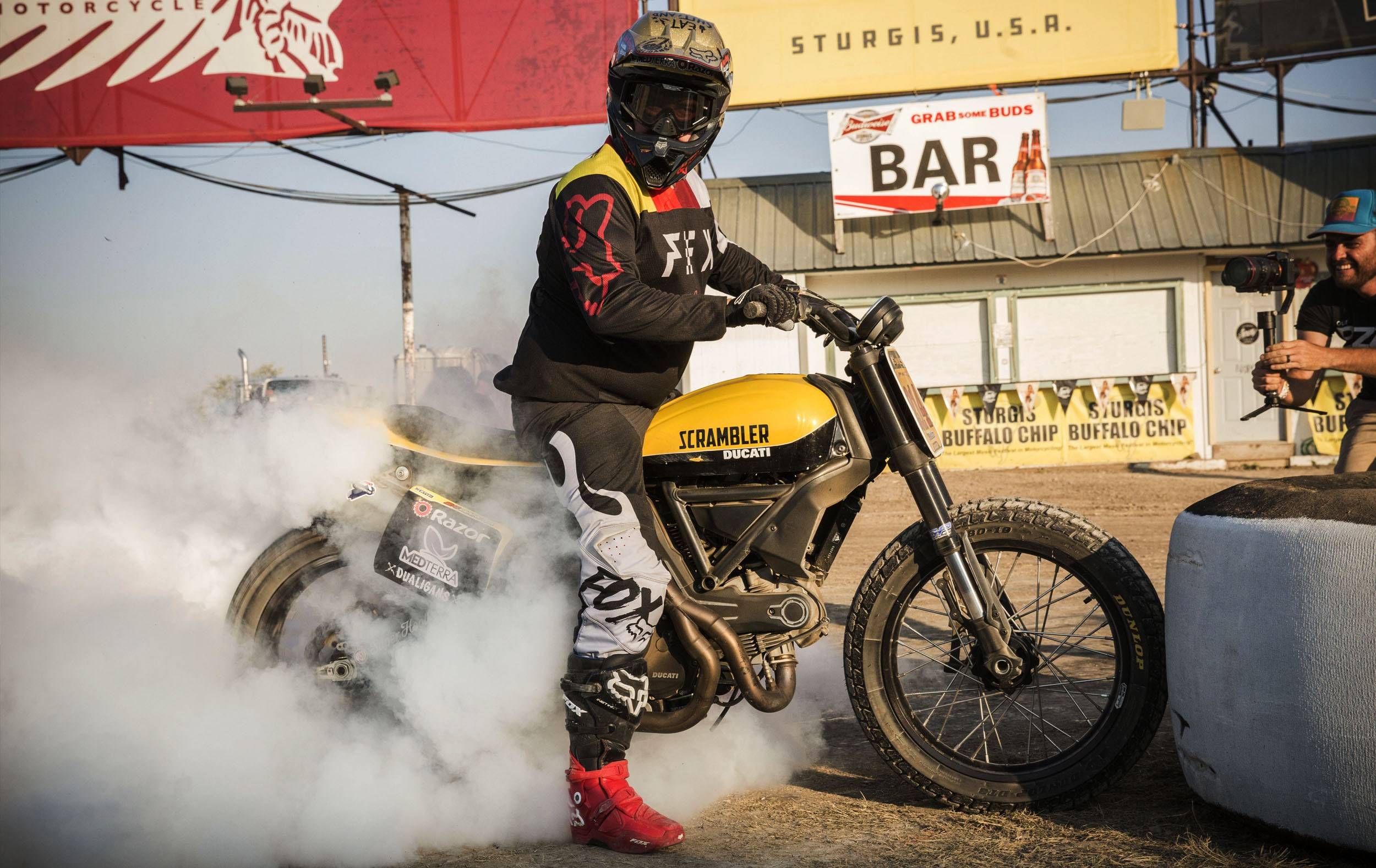 Practice started and it quickly became apparent the track had a tricky surface to contend with as nearly everyone had trouble with turns 1 and 2. Plenty of overshooting turn 1 and sliding out going into and out of turn 2 was common. As the laps went on, riders adapted and after practice, changes were made to their machines to compensate for the track. “You’re definitely going to need to be smooth, steady and consistent. Man, throttle control is gonna rule today” Dan Mischler in response to what the keys were to riding the track.

1st heat Super Hooligan: Frankie Garcia rockets off the line with Jordan Graham literally inches behind him. Jordan touches tires with Frankie a few times as he applies some serious heat but on the last lap Jordan goes a bit wide into turn 1 and Frankie gets some breathing room to take the win. The ever crafty Randy Bereman takes 3rd.

2nd heat Super Hooligan: Andy Dibrino and Dan Mischler are neck and neck into the first turn with Dibrino going in a bit too hot but somehow coming out of turn 2 with the lead. Freestyle MX legend Carey Hart is in third on the first lap. At the halfway mark Mischler gets in right behind Dibrino and looks ready to challenge for the lead but Dibrino pulls some speed out of his bag of tricks and pulls away a little bit. Finishing order is Dibrino in first with Mischler and Hart in a close second and third.

3rd Heat Super Hooligan: Joe Kopp gets the hole shot with Jordan Baber and Brendan Foley in tow and battling it out. Joe puts on a clinic on how to ride flat track and takes an easy win with Baber and Foley settling the battle for 2nd and 3rd.Mike Hill had been in 4th and eyeing up the 3rd place spot but a slide out with a few laps remaining sends him to the LCQ.

4th Heat Super Hooligan: Lot’s of action in the first turn as Dan Jacobson gets the holeshot with Tyler Bereman right behind him. Tyler goes a bit wide and out of a cloud of dust AJ Kirkpatrick emerges with the lead with Jacobson in hot pursuit.Tyler has a heated battle with James Monaco for 3rd and the last direct transfer to the main. Monaco holds him off as Tyler tries everything in the book but just comes up short at the finish line.

LCQ Super Hooligan: Big crash at the start and Tyler Bereman came out nearly last out of turn 2. All eyes were on him to see if he could work his way up to first for the one and only transfer spot to the main. Within a few laps Tyler had slid, sliced, and diced his way into the lead in a fine display of riding skills. He took the win and the stage was now set for the Super Hooligan Main event.

Super Hooligan Dash for Cash ( Winner of each heat races for $1000): Andy Dibrino with the holeshot and Frankie Garcia stalling his bike in the first turn. Kopp and Kirkpatrick try to keep Dibrino in their sight . Kopp is right on Dibrino but can’t really make a pass and Dibrino wins the dough.

As the Hooligans took a break a few other classes hit the track in what was entertainment at it’s finest. The Midget Mashup Class was composed of pit bikes, mini bikes, groms, you name it . Adults on small motorcycles is always a good time. Cody Kopp, son of flat track legend Joe, was even in the mix. Vintage / Tanksshift class was a bit of an eye opener. These cats were aboard machines 50 plus years old and absolutely sending it. They more than likely could have run in the Super Hooligan class and been competitive. Pegs flew off and oil spewed as these machines from yesteryear were pushed way beyond their limits. The spectators went wild and the men riding them had the biggest grins of the day. 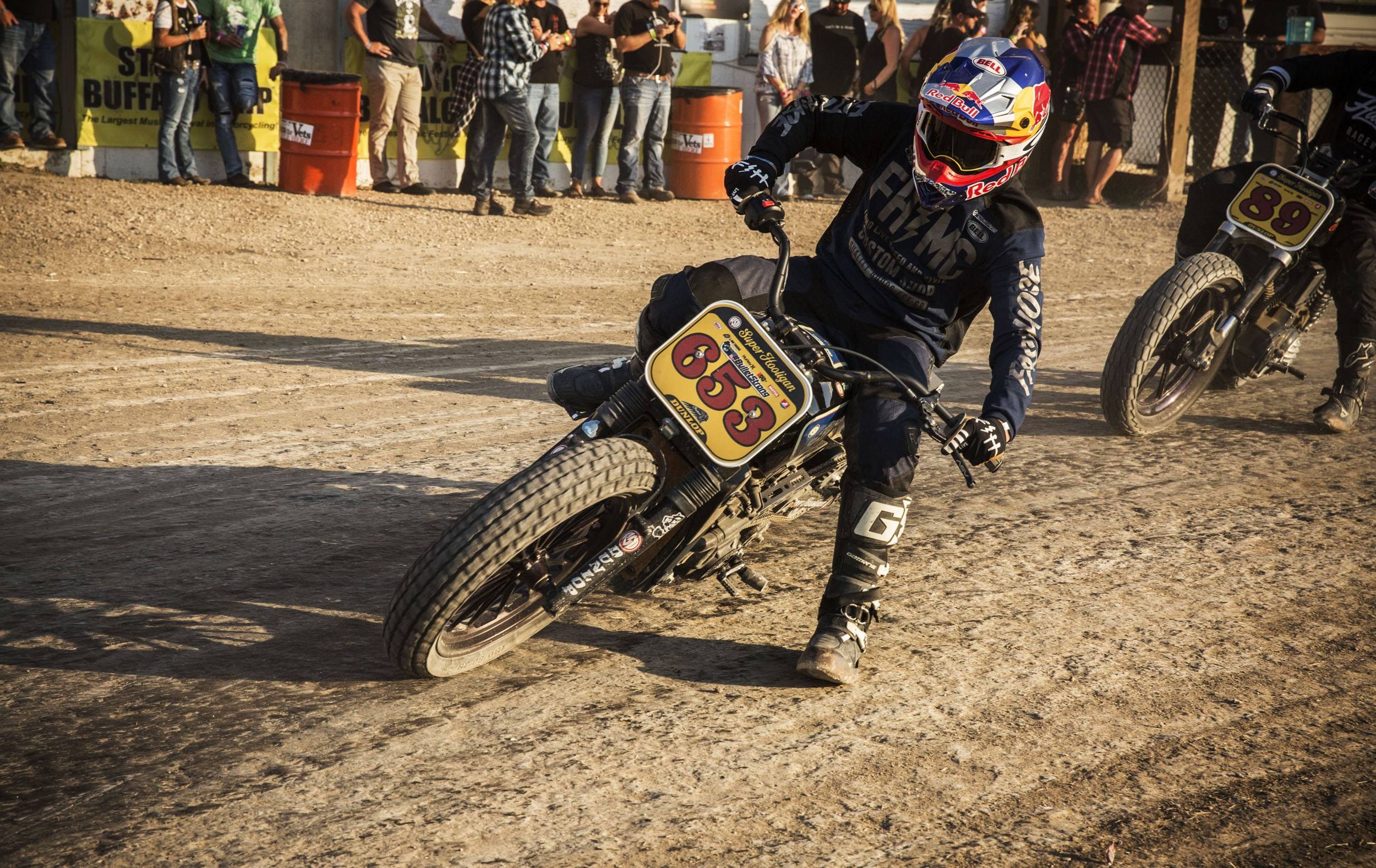 Main Event Super Hooligan: Frankie Garcia and Andy Dibrino get the jump off the line are side by side going into turn one. Dibrino dives underneath Garcia to take the lead. Joe Kopp, AJ Kirkpatrick , Jordan Baber and Jordan Graham follow in a tight pack. Joe Kopp dives underneath Garcia in turn 2 on lap 2 to take over the second spot and sets his sights on Dibrino. On lap 3 Dan Mischler works his way into the top 5 after a 2nd row start and Jordan Graham goes down. Dan Mischler works his way into 4th another lap later. Halfway through and the top 3 running order is Andy Dibrino, Joe Kopp and Frankie Garcia. They are all still close enough to each other that any little mistake will lead to a position change. Meanwhile behind 4th place Mischler, Baber, Jacobson and Foley have a battle royale and are all over the track and each other. It’s racing at it’s finest. A few laps from the end , Kopp puts on a charge and tries getting by Dibrino with every trick he knows. Joe even gets a front wheel underneath Andy in a turn but can’t make it stick.The crowd goes wild and Dibrino just edges out Kopp at the checkered flag for the win. Master of fun Frankie Garcia rounds out the podium with a close 3rd. 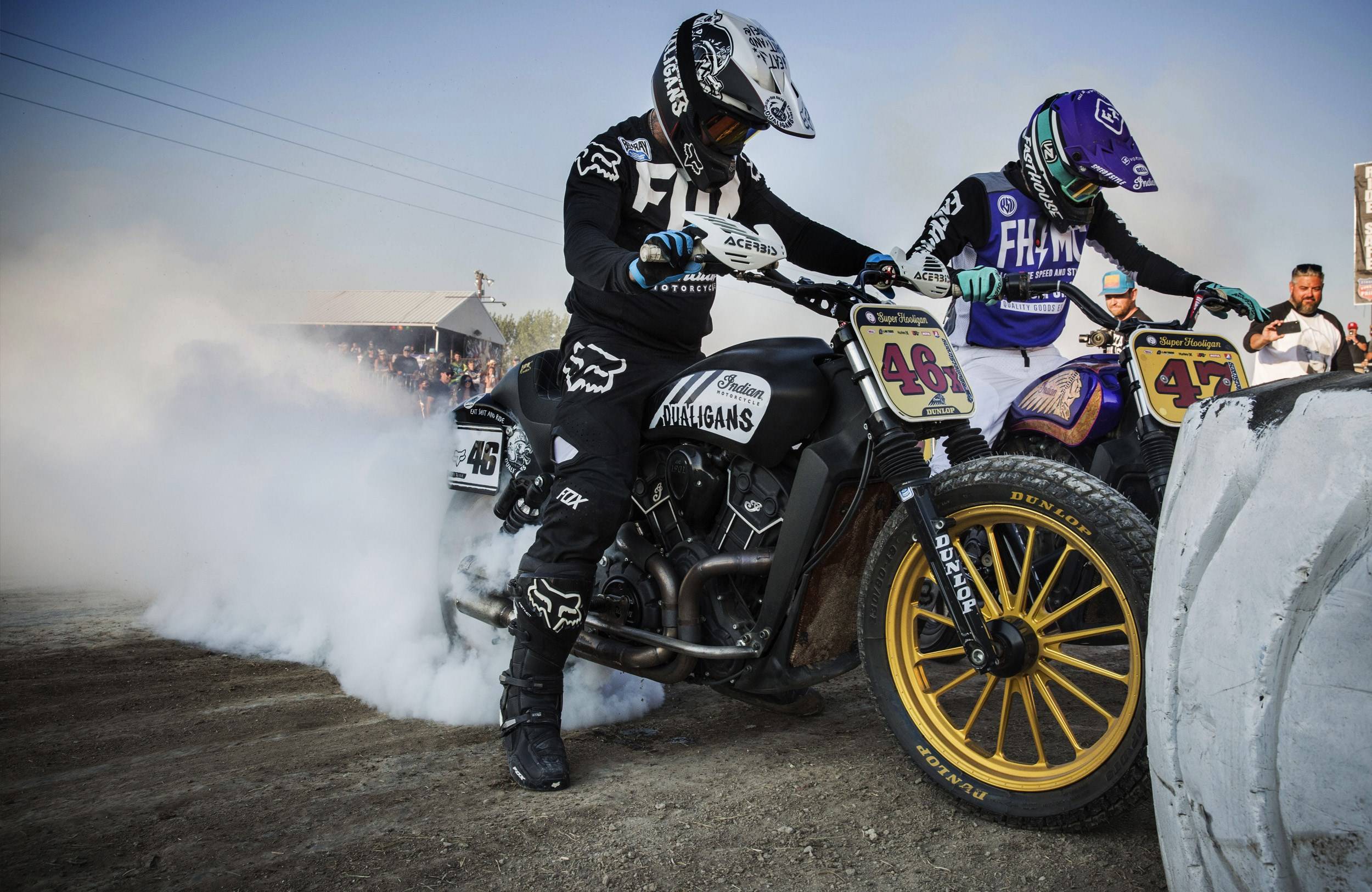 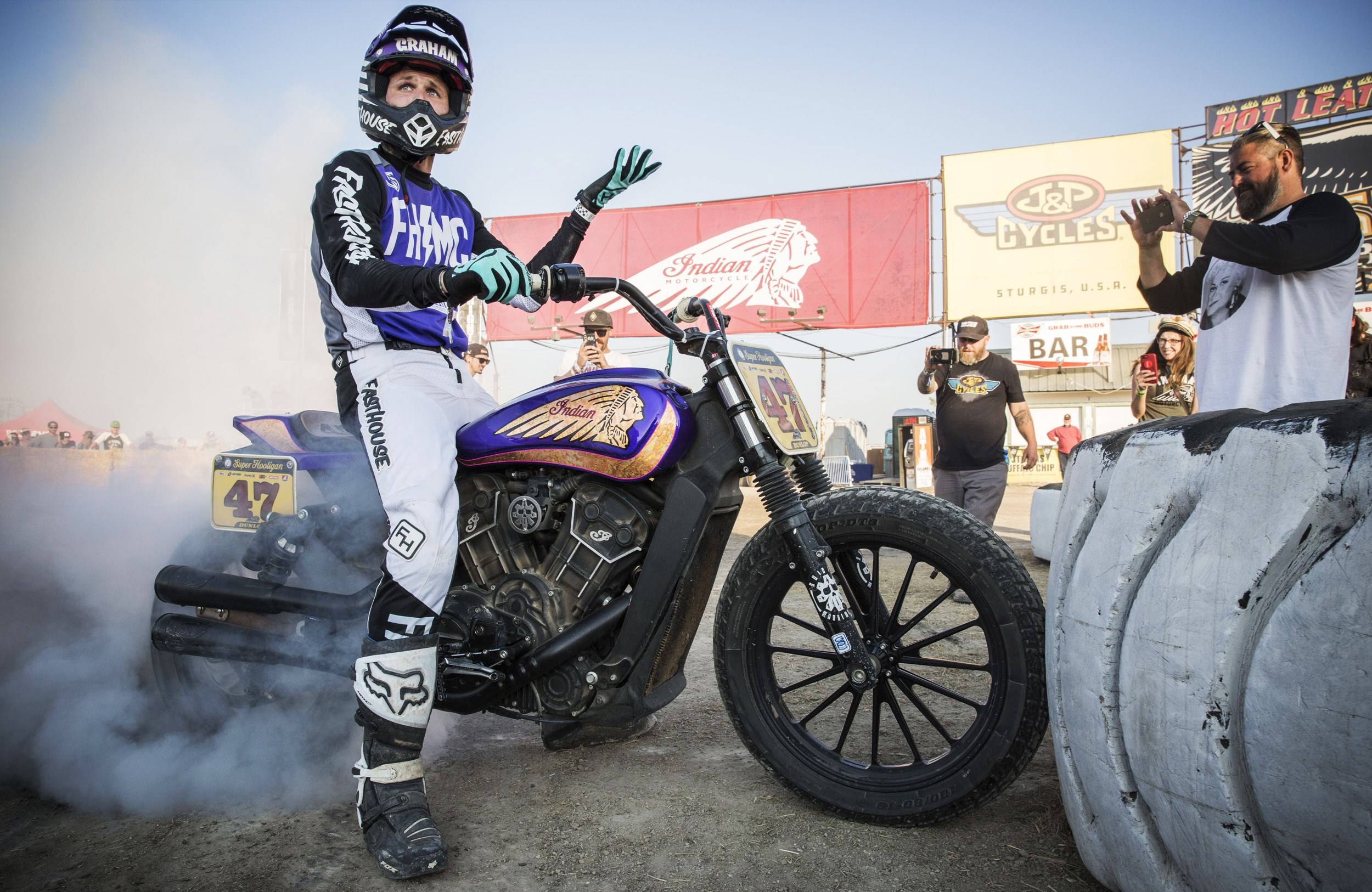 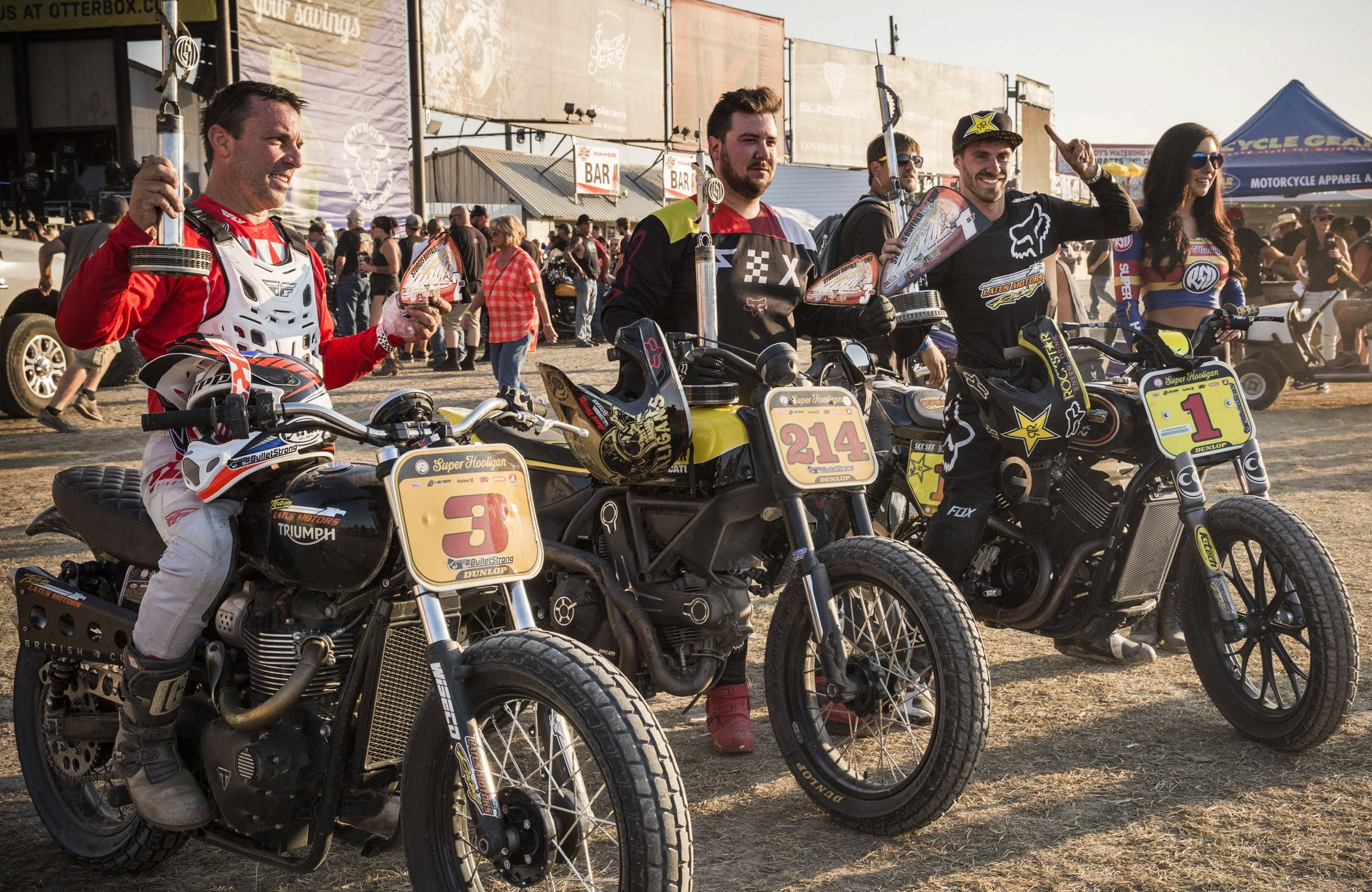 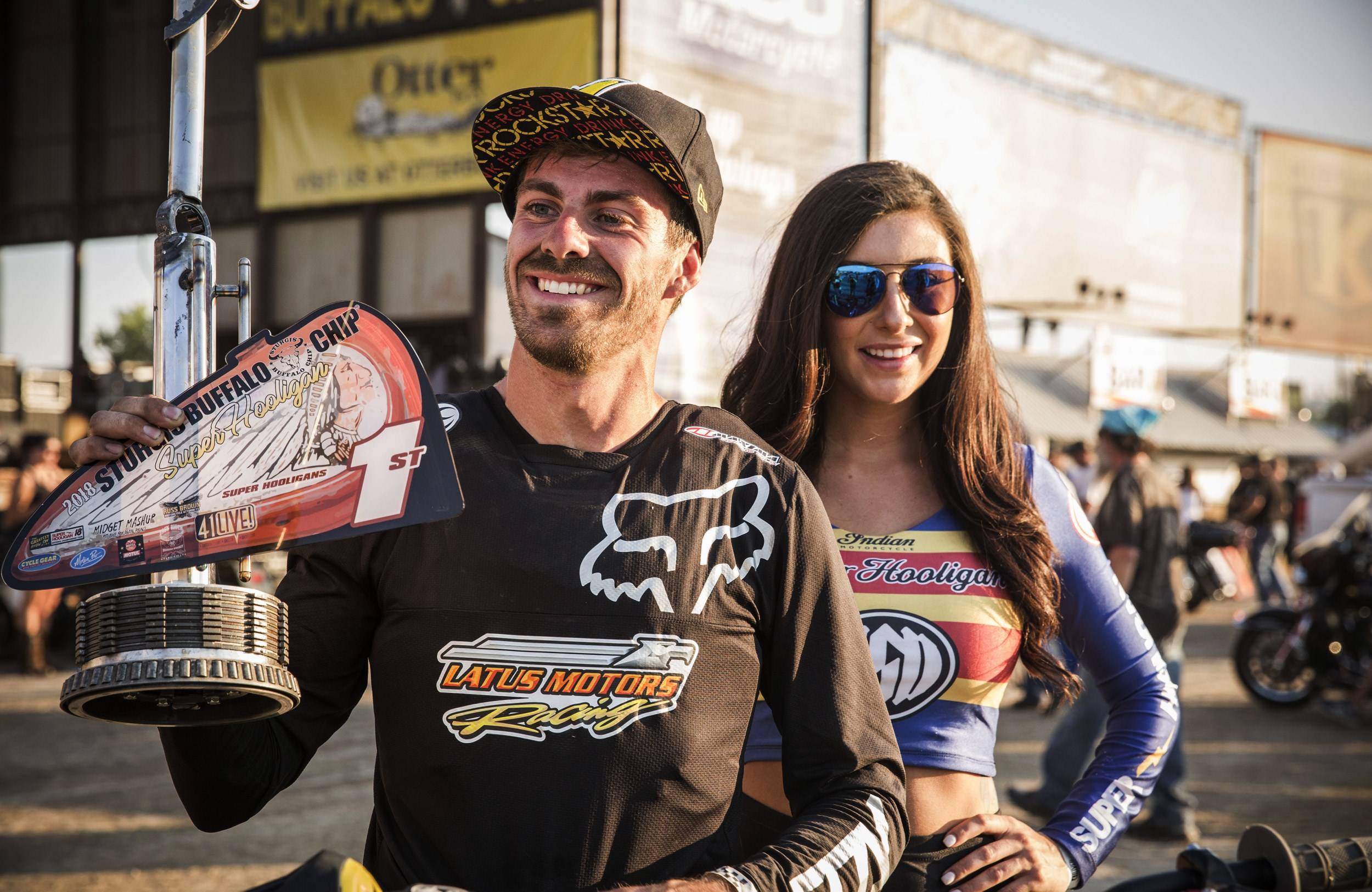 Andy Dibrino had this to say after the race , “ Getting the Holeshot and not giving up the inside were key in winning the main. Joe was hounding me but this track was hard to pass on.With it being dry, It was hard to set the pace and not overdo it. I made one mistake and Joe was right there but he couldn’t quite get the power down and I was lucky to recover from that and bring it on home.”

A short time later , all involved in the race got to enjoy the fantastic music of The Reverend Horton Heat and Eric Church along with thousands of others. This happened right on the same ground that minutes before had been the race track. Pretty rad and only in Sturgis at the Buffalo Chip. 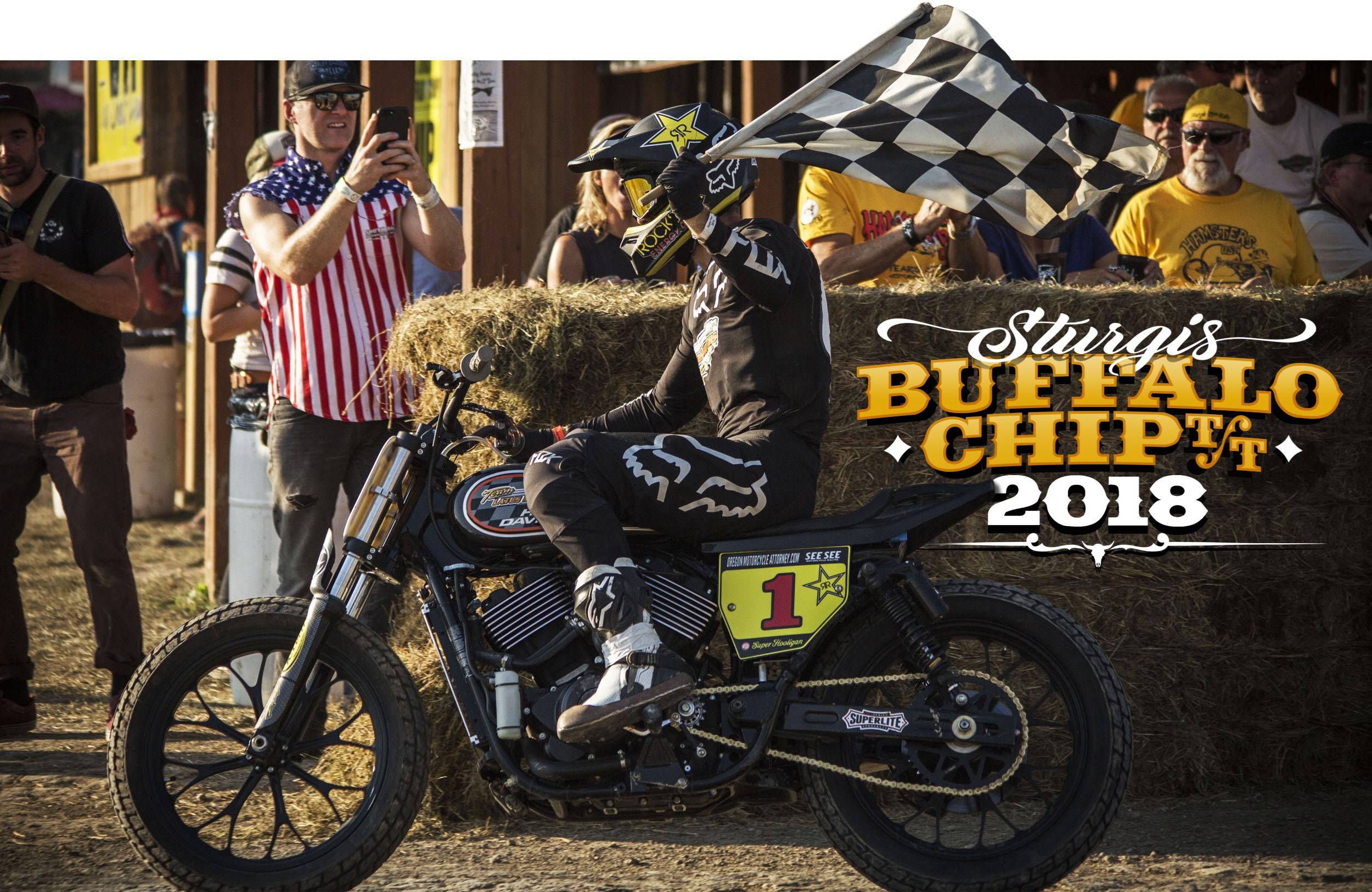