It’s hard to believe the tradition of Sturgis Rally and racing started back in 1938. It was a simple weekend where friends gathered to ride in a series of off-road races. Including, of course, a flat track race.

The Jackpine Gypsies is the club that held the weekend event and as a result, carries a sacred place in the heart and history of Sturgis. If it wasn’t for the Gypsies, Sturgis may not be the mecca for motorcyclists it is today. Almost 80 years later, not only are they still a club, they still hold races on the same historic grounds they own in Sturgis, South Dakota.

Fast forward to present day Sturgis, specifically the Buffalo Chip. The Chip is its own city, the third largest city in SD. when fully packed with concert attendees and campers. The Chip is run by the ever resilient Rod Woodruff; its fate held by its patrons, is a place where political correctness and rules are often eclipsed by the human need to have more fun that should be legal.

To the Super Hooligans, there couldn't be a better place to hold a flat track race. In front of the stage shared by Willy Nelson, Lynard Skynard, Elle King, Weird Al Yankovic, Cheap Trick, Leon Russel, Ratt and many others. And that’s only a slice of this year’s line up. 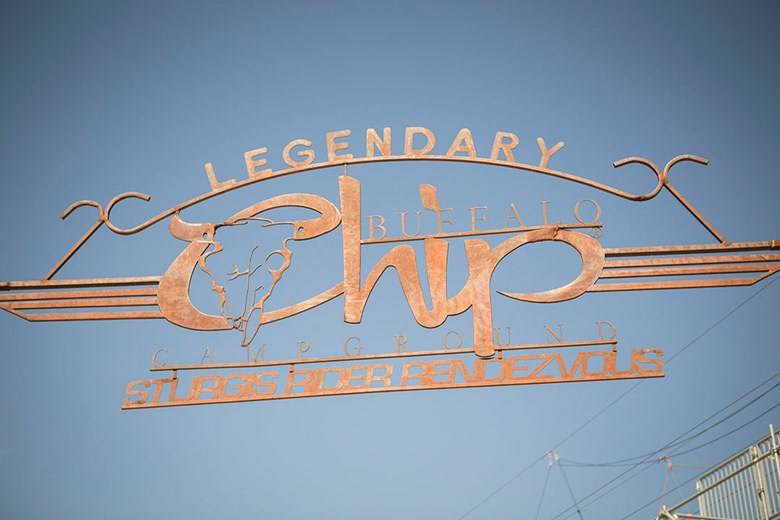 Let’s start with the track, uniquely shaped, it resembled more a TT track (sans jump) than a Flat track as it had a hard-right turn. The infamous AMA Pro Peoria TT was the next weekend, so throwing a right turn was probably a good opportunity for the pro racers to bolt up a front brake and get in a little prep with a payout. Brian Bell and the IV League Flat Track crew had their work cut out for them with building a temporary race track under the ever-changing weather that is South Dakota. Many weeks of track preparation, hauling in clay-ish dirt from out of state, ripping, watering and packing the track surface transformed a grass infield into one of the best tracks the Super Hooligans have ridden on to-date.

A reassuring (and needed) practice started off with the Pros on their DTX 450s. Slipping and sliding their way around the flat track, they struggled at first to match their gearing and riding style to the unconventional track. It wasn’t long however, before they were ripping it, tossing dirt into the crowds and onto the stage.

The Super Hooligans took to the track next. Wild men, eyes filled with anticipation of unpredictable moments lying ahead. The track, dusty and barren of moisture made it difficult for them and their 500lb Indian’s, Harleys, Triumphs, Ducatis and Yamahas.

The core Vintage Class, Hand-shifter Class and of course, the Run What Ya Brung Class all took their practice laps next. As Sturgis is known, the weather rolled rapidly as the practices finished up. A deluge of rain came out of nowhere. Sitting under the race tents, Pro’s, Hooligans and newcomers all watched as their, what they thought to be great track, was being washed away.

After an hour of down-pour and an hour of sunshine, the track conditions had magically improved, tenfold. Maybe it was the ghosts of Jackpine Gypsies past giving a nod to the racers efforts to keep racing at Sturgis alive, but it could of just been pure luck. Either way, it was well received. The IV League flat track team put in a heroic effort to keep the track ridable and ultimately fun. 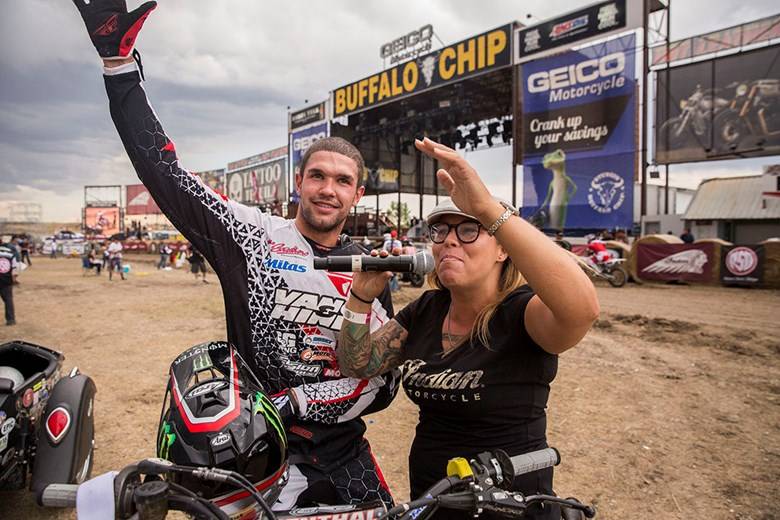 These are the types of men (and women) who race in Super Hooligan. Adrenaline seekers, wanderers, appreciators for the need for two wheels and way to express it. This is the embodiment of Hooligan Racing folks, it’s about the adventure, the race, the time shared with friends and family with little regard for who “wins". 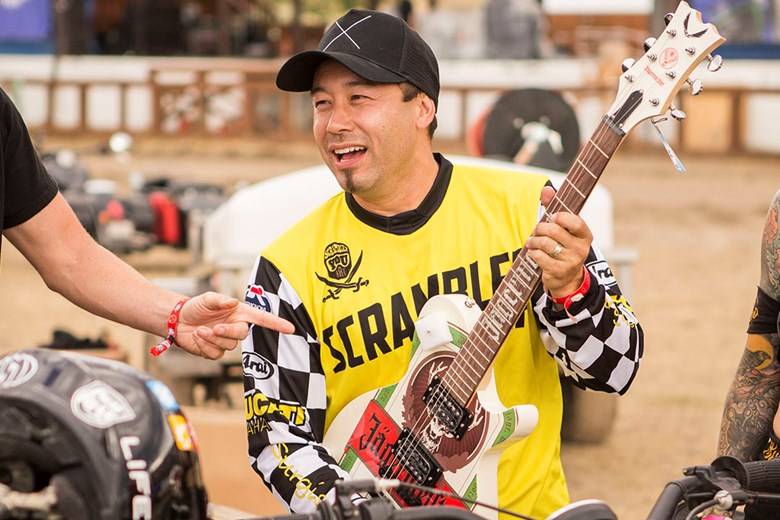 The Daytona 200 winner and AMA Superbike Champion Jake Zemke, #98 managed to lead the main event tip to tail. The 800cc lightweight Ducati of Omaha Ducati Scrambler proved to be nimble and fast on the tight track. A potent combination at the reins of a man with the level of expertise Jake has. 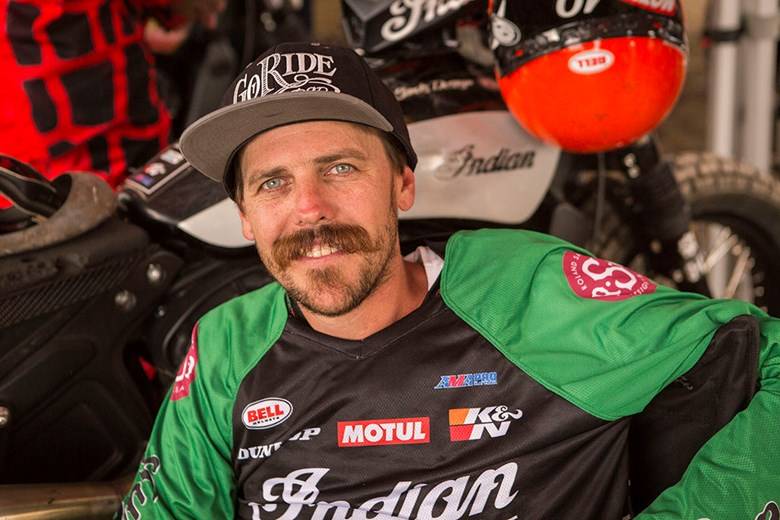 Cameron Brewer #24, was found in the pits prior to racing, unsaddling a gel seat and removing the contents of his saddlebags from his RSD Indian Scout. In the spirit of true Hooligan Racing he decided to ride his Indian 1,800+ miles from Long Beach, CA to Sturgis, SD and race it. He mounted a fresh rear tire the morning of the race and promptly won his heat race, then lined up P2 in the main bar-to-bar with Jake Zemke. Brewer gave everything he had for a close second place on the only Flat Tracker Bagger to line up. 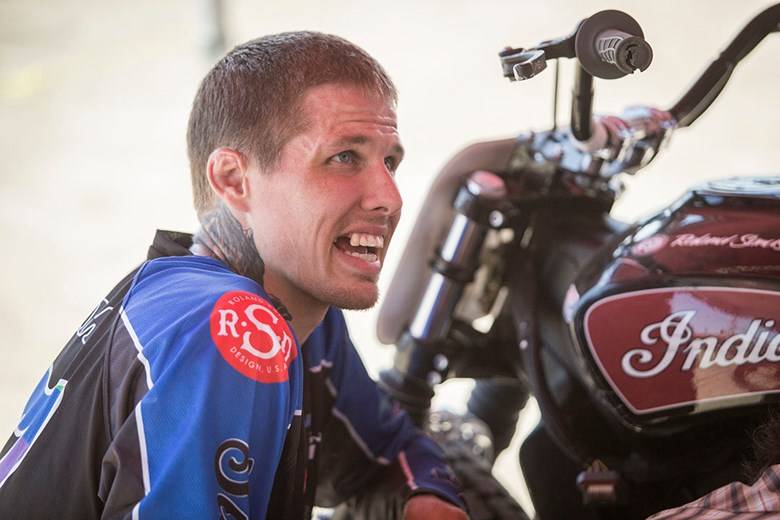 Jordan Graham, #47 showed again thirsty for Hooligan action. Riding his loaned RSD Indian and supported by AirTrix, he’s a bit of mystery. Jordan is a desert racer, world-class custom painter at Airtrix, appreciative artist. He drove all night from Salt Lake City and ended third in the main event. His victory lap would have gone down in history, until he got bucked off full throttle into a hay bale. Landing twisted and confused with a shit-eating grin ear to ear, he has been added to the RSD Hooligan team and officially deputized to the posse. 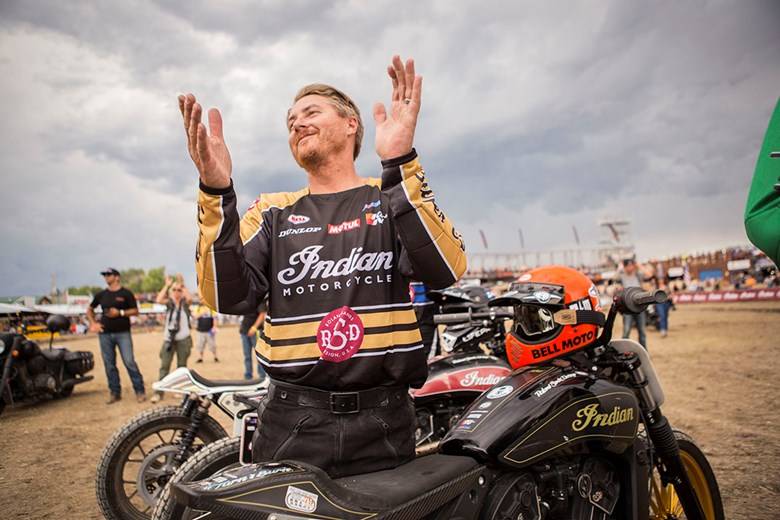 As for Roland “The Sherriff” Sands, after a tough week he was determined to put the bike on the podium. Something about the way he was riding made it seem inevitable that he was going to take home the win. Unfortunately, that was not the case. After a miserable start that saw him crushed between wheeling bikes, he was beat out by Graham after coming back from seventh to take fourth. That however didn’t stop him from taking several victory laps with his compadres. 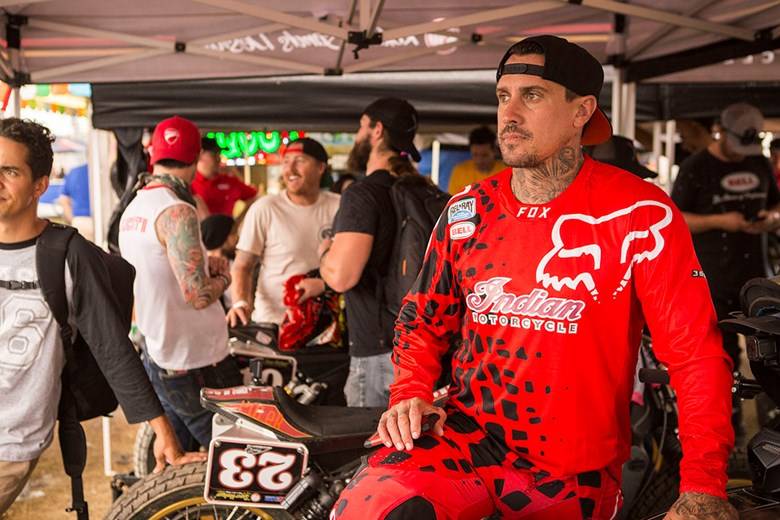 Old timer turned a new comer, first guy to backflip a motorcycle to dirt, Carey Hart #46, showed up and braved one of the RSD x Indian Scout Sixty’s. His lack of practice was a determining factor; “I felt like Bambi on Ice…” was his comment. That didn’t stop him ripping up the track in a race long battle with Sands and Hunter Klee. 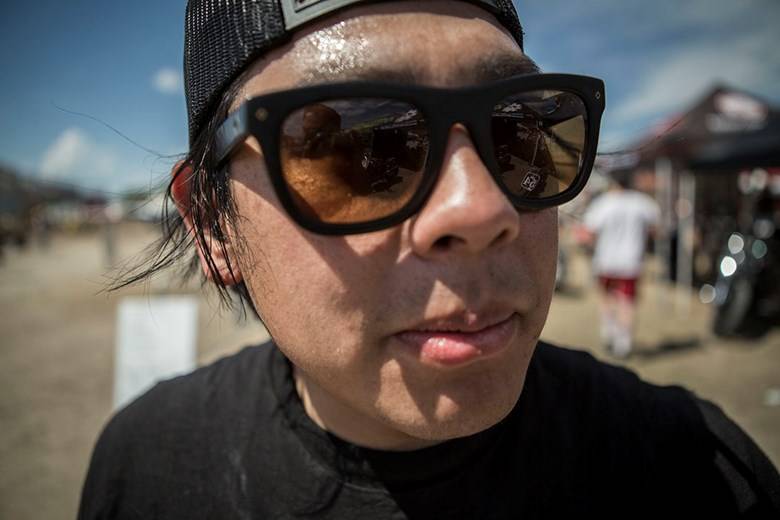 The Suicide Machine Co. duo, Aaron and Shaun Guardado were separated unfortunately on this trip. Still recovering from a nasty crash at Lost Highway Show, Shaun decided to forfeit this race and stay behind and tend to a demolition derby car. In his place, good friend Matt Black joined Aaron kept the two suicide bikes on the grid. Despite their efforts, they were unable to find the podium finishing they were hoping for. Aaron though, in standard candor was all smiles and witty jokes a-plenty. 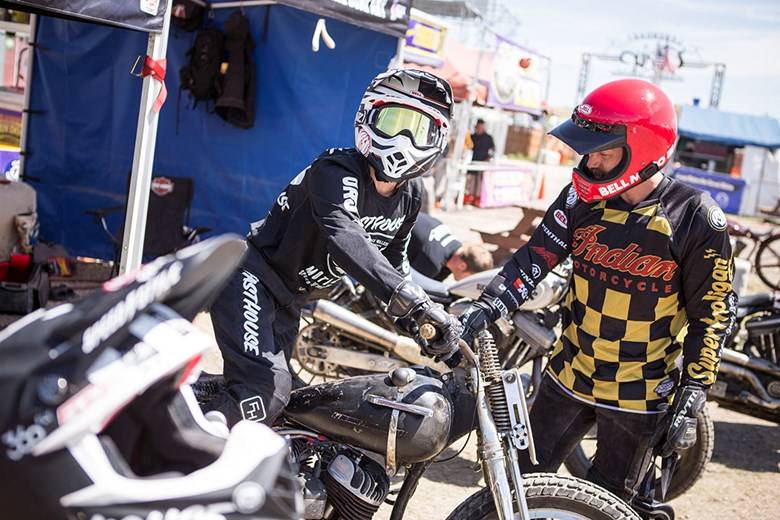 Leticia Cline and husband Jason Paul Michaels were also ready and willing to race, despite the fact that they too rode from Long Beach, CA. There was a tension on the track. They were about the race. It was evident. Leticia and the RSD Yamaha Bolt Tracker effortlessly took the hole shot with Jason and the rest following behind. Fair is fair in marriage and racing, Jason didn’t give an inch and managed to make up the difference and take the win. Helping Leticia put her bike on its stand, as any man worth his salt would, he added, “Good race ma'lady.” And Leticia, flipped him off! 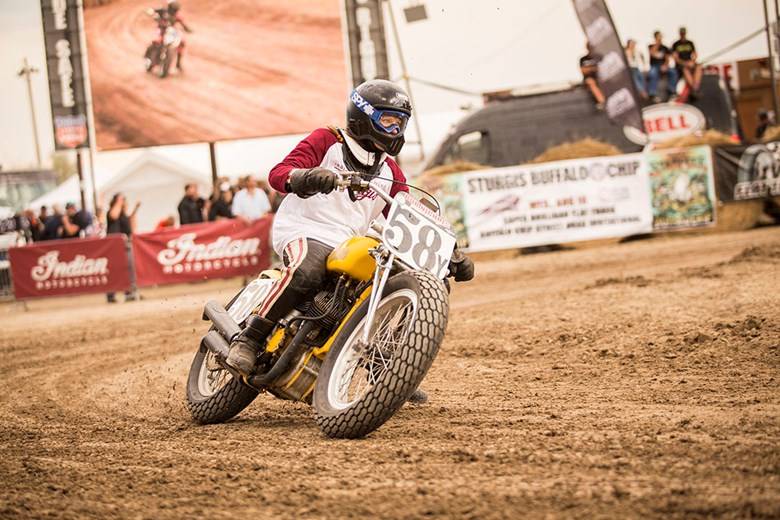 Speaking of women riders, having made her next biggest debut since being the first woman ever invited to the Race of Gentlemen, Miss Brittney Olsen (SoDak native) showed up to race and join Leticia Cline as yet another female face. Brittney rode the 1954 Roland Sands 45” Flat-head along with Jim Ottele’s famous Bob Nichols 1937 Indian Big Base Scout.

NOTE – Brittney Olsen is currently behind a campaign to save the infamous Sturgis Half Mile track from being torn down and replaced with condominiums. Your support could very well help save a future Super Hooligan race site. Please visit SpiritofSturgis.com for more details on how you can help her keep the history alive.

The Vintage Class was taken by Travis Newbold on his Yamaha twin. The enigmatic moto gypsy made his way across the country racing multiple races on his trusty Yamaha. After throwing multiple chains in practice he managed to bang things back together in time to get her back on the track and take the win.

The hand shift Class was ruled by Jim Otlette on his super trick Bob Nichols built 36 Big Base Indian Scout with no brakes!

If all that wasn’t enough, there was also Run What Ya’ Brung street drag racing with Crazy John, including a RN Top Fuel drag bike that scattered its motor running down the 1/8th mile section of pavement in the middle of The Chip. All of this happening amidst all the other commotion and splendor that is the Legendary Sturgis Buffalo Chip concert venue and campground. Live on-track announcing was provided by Indian’s very own Robert Pandya and female moto industry spokesperson Jacqui Van Ham.

Eric Bostrom, AMA Pro Superbike Rider and SuperSport Champion made a late appearance in true Hooligan Style missing practice. His first going on the RSD Indian Scout he managed a second in his heat race, his first time on the bike. His Second row start in the main and the pandemonium that ensued kept the younger Boz Bro behind the mayhem allowing the leaders to get out ahead. He vows a return. 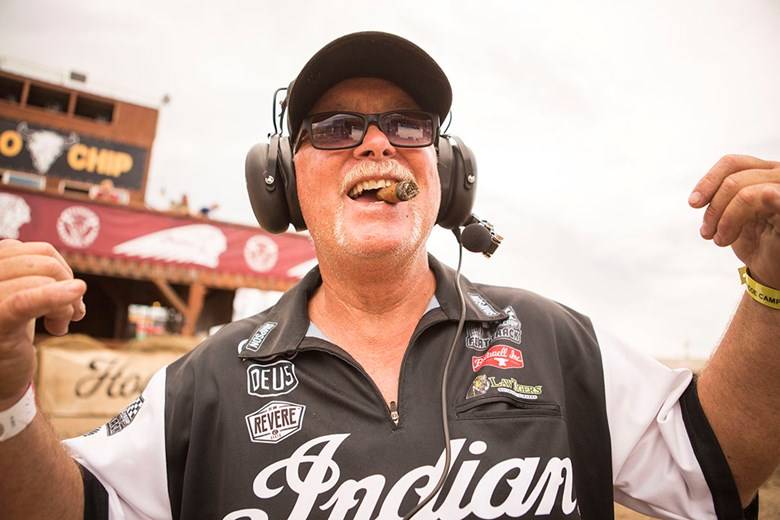 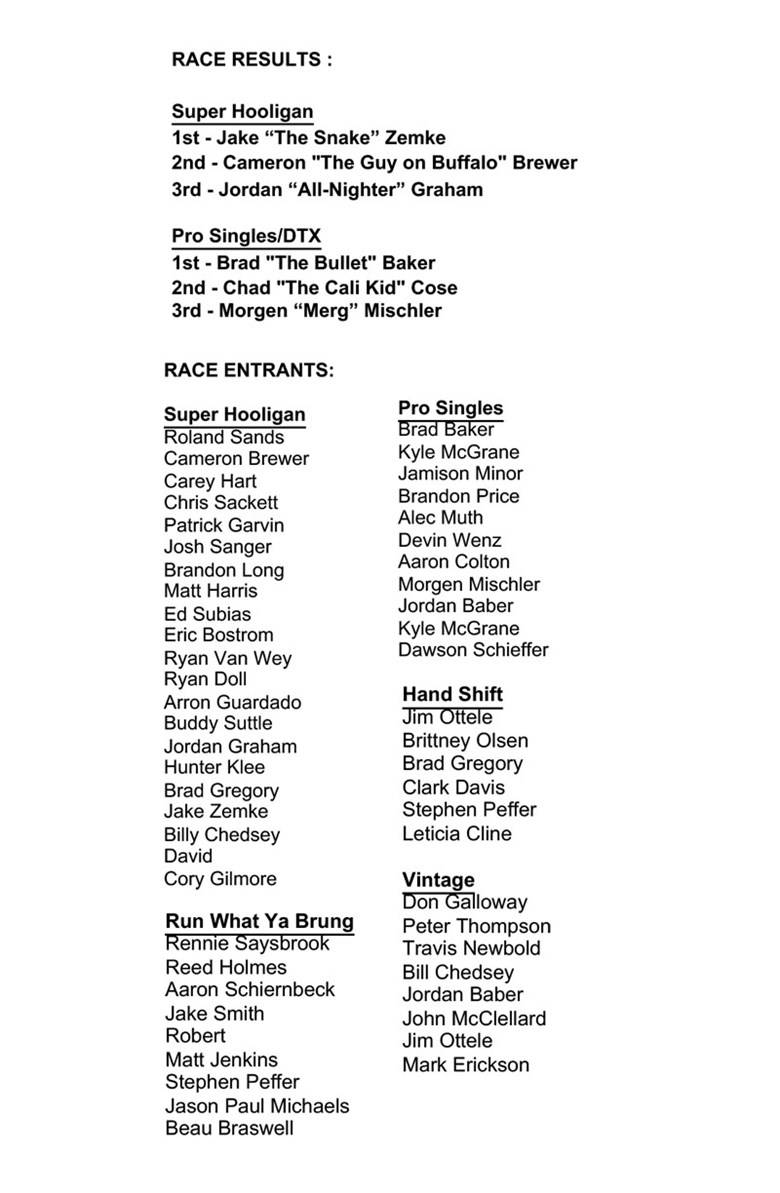 A huge thanks goes out to all the riders, the Teams at IV League, Indian Motorcycles, Bell Helmets, the man, the legend, Rod Woodruff and his staff at the Buffalo Chip and all the fans who came out to see the show. We’ll be back next year to make the Moto Stampede bigger and better.

We invite racers and fans of motorcycle racing to participate and attend the Inaugural RSD Super Hooligan Flat Track Race at the Sturgis Buffalo Chip Main Amphitheater during the 76th Sturgis Motorcycle Rally. At the Buffalo Chip, the riders are scheduled to take to the track for the First SUPER HOOLIGAN race on Wednesday, Aug. 10 from 4 p.m. to 7 p.m. Race classes for the evening include Run What Ya Brung, Vintage, Hand Shifter, Super Hooligan and a purse paying Pro Single/DTX. Afterwards, stick around to enjoy the blistering audio of The Reverend Horton Heat and Five Finger Death Punch. All brands of bikes are welcome to race. 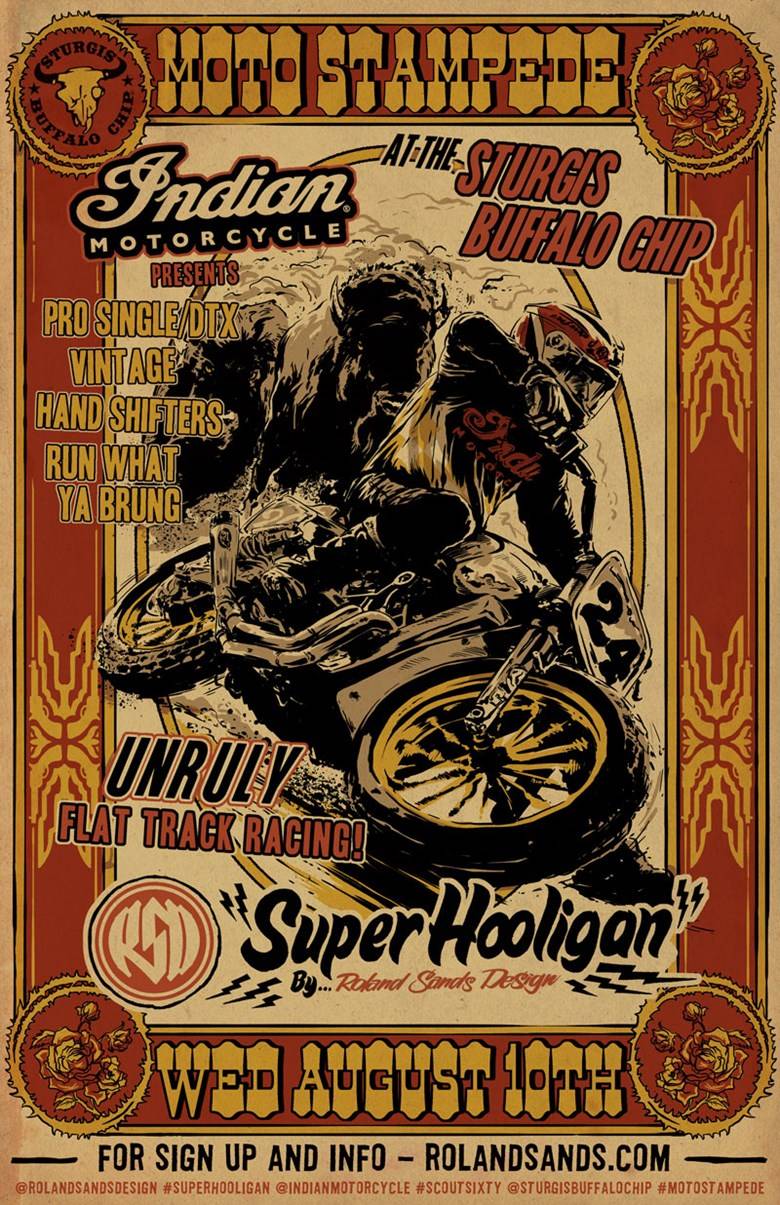 The races, sponsored by Indian Motorcycle and Roland Sands Design, bring back the excitement and surprises of traditional heritage racing with the added punch of music and drag racing. The newly built dirt flat track at the Buffalo Chip circles the infield between the Wolfman Jack Stage and the Top Shelf Bar bringing the racing action to center stage with prime VIP viewing.

The spirit of hooligan racing comes from a simpler time, when you raced – and could ride home on – whatever bike you owned. With its roots in Southern California motorcycle culture, today’s flat track hooligan racing category is rapidly gaining in popularity with riders of all ages and experience levels across the nation by offering the fun of motorcycle competition in a less structured environment. Combining the craft of custom motorcycles and racing, the Super Hooligan rules are loose and limited the bikes to 750cc and larger twins in stock frames with dirt track tires and no front brakes. 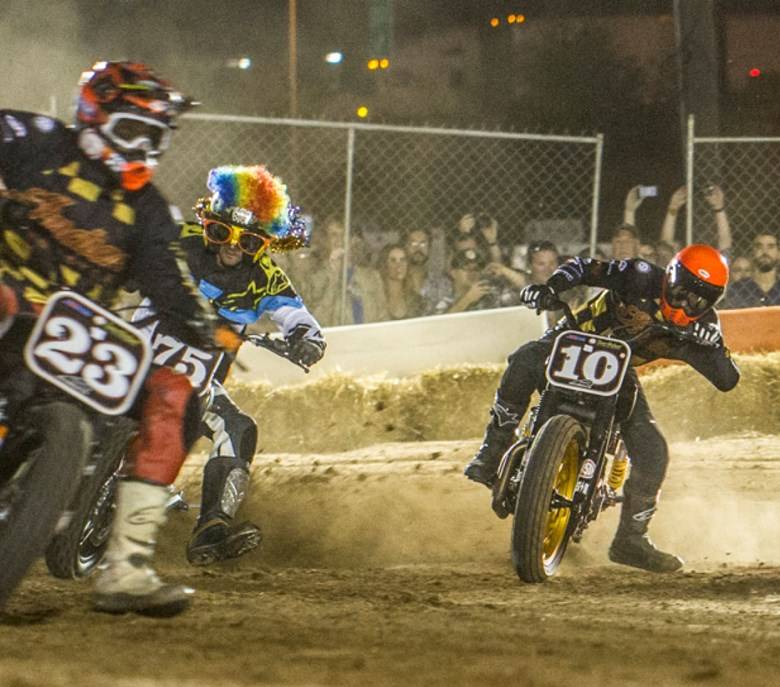 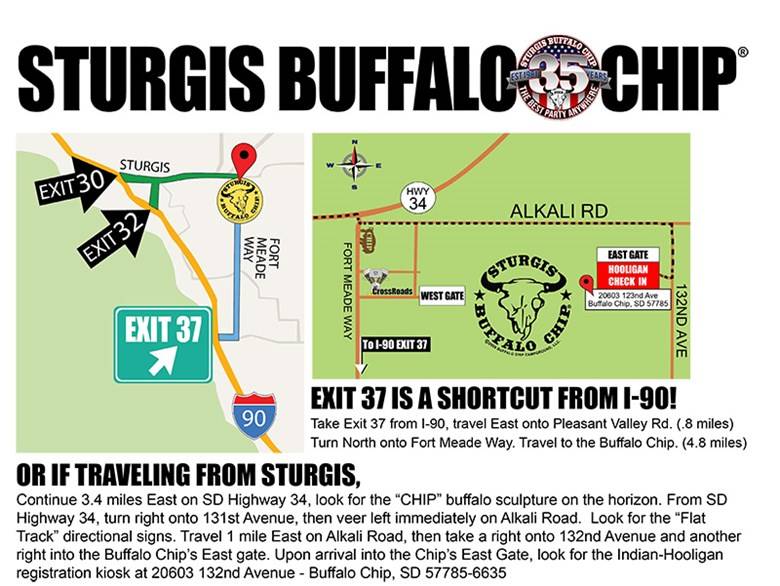