Round 3 of the Super Hooligan Series took place on hard packed red Georgia Clay at Dixie Speedway in Woodstock, GA. This wide 3/8th mile D Shaped banked track looked as intimidating as it was fast. This wasn’t your typical Hooligan track, this is the kind of track that either makes you a better rider or can take it all away in an instant. There’s a saying they have in the south “Dirt roads will give you peace of mind and clay ones will show you what you’re made of.” This track was the perfect dichotomous example of that. 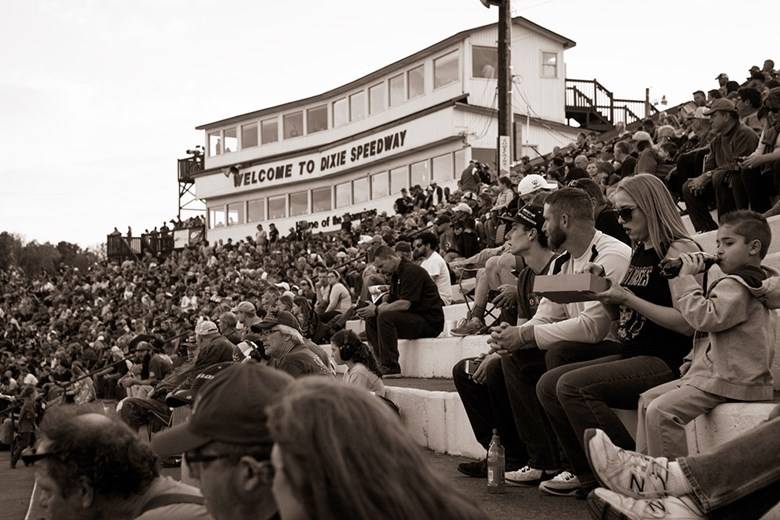 In 1976 Mickey Swims bought the then asphalt track and decided he would try his financial luck at racing but it almost didn’t survive the 80’s. Racing only on Saturdays and half of the year proved to be hard and that’s when he decided to haul in clay from Rome GA and make the Dixie Speedway an all clay fast track. Fans loved it and now more than 200,000 come out every week of the year, keeping this race a true grassroots event.

In the pits, gear heads of all ages walk around to get a glimpse at the two-wheeled machines and the riders who push them to their limits. Tailgating, Bar-B-Ques and Marlboro Lights dangling from their lips waiting for a good ol' time and the AFT and Superhooligan boys were ready to give it to them. These people wanted a party and they brought it with them. Turn 1 and 2 had a sea of lifted pickup trucks equipped with grills and double decked seating options for ultimate viewing. This is where the spirit of Hooligan racing was born from, a simpler time when you could ride home on the bike you just raced on and anyone of those in the crowd could have easily joined in on the action. 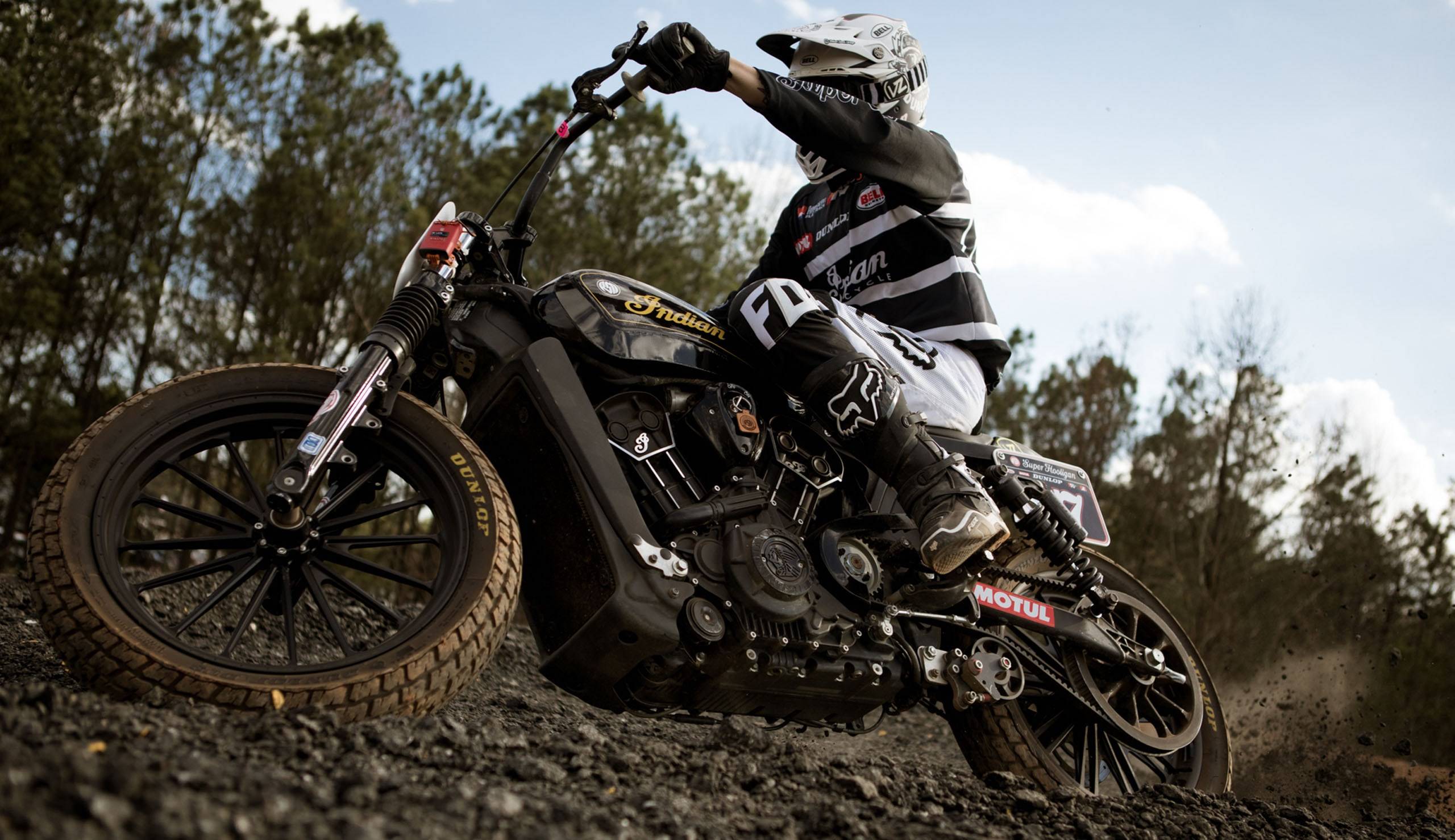 Maybe feeling inspired by a good time or just to break up the seriousness only a track like this could bring, Aaron Guardado and Jordan Graham did some ripping on the piles of gravel that lay beyond the pits in a field of excavators and bull dozers. Looking like something out of Mad Max, the people loved it.

Under the tents riders sweep off chunks of sticky clay from putting in a days worth of work practicing on the track. The rain held off and opening ceremonies it was time to get serious.
After winning the DAYTONA TT in dramatic fashion last week when he took the lead in the final turn before the checkered flag, Dalton Gauthier (No. 22 Estenson Racing Yamaha YZ450F) left nothing to chance in Dixie. The young Pennsylvania native won in dominant fashion, making it two in a row in AFT Singles competition. Gauthier won his heat and semi before leading every lap in the main event – which was extended by a late-race red flag. Gauthier pulled to a three-second lead before the red flag caused by second-place rider Brandon Price (No. 92 Don’s Kawasaki KX450F) going down in Turn 1 with three laps remaining. The race resumed with a five-lap shootout, with Gauthier sprinting to take the checkered flag 2.006 seconds ahead of Kevin Stollings (No. 99 Ben Evans Honda CRF450R).

Shayna Texter (No. 52 Richie Morris Racing Honda CRF450R) finished third in an up-and-down event. After leading every lap on the way to a win in her semi, Texter dropped to 10th on the start of the main event. After working her way up to sixth before the red flag, she had a strong restart to capture the final podium position.

Just before the main events darkness crept its way across the track as the last sliver of sun shown down when the Hooligans roared out to their heat race. Jordan Barber quickly proved to be the man to beat. He was the fastest qualifier, won his heat race and the Dunlop Dash for Cash.

During the main event however it was road racer and See See sponsored rider Andy DiBrino who pulled the K&N holeshot but proved to need a little more power on his H-D 750. He ultimately battled for third place only to come in 4th behind number 62 Ducati Scrambler racer Miles Thornton. To his defense, Dibrino along with number 88 Jimmy Hill, who came in 6th, did just haul their race bikes from coast to coast from Portland to Atlanta, living on Waffle House and taking tours of many Motel 6 locations just to make it in time to give it their all on the track. If that’s not grit then I don’t know what is.

It was Baber on his H-D S&S Sportster who took the win of the main event, but not without number 47, Jordan Graham on his heels aboard his Indian Scout Sixty. Baber took home $500 from Dunlop and Bell Powersports, a custom painted Bell Moto 3 helmet by Airtrix, and a $1000 bonus from Indian Motorcycles for winning the main. Plus another grand from Dunlop for winning the four lap, winner-take-all Dash for Cash. Definitely not a bad day for Baber!

“The track just kept getting better and better as the day went on and that made for some serious racing, I pulled off the hat trick and won a lot but it was the fellow hooligans that made it special thought. Pretty sure Graham was equally stoked for me to win as I was. I almost forgot what having run racing was like until tonight. That’s what racing is all about.” Baber said modestly while holding all of his awards and checks.

Trevor Monn worked like a wild man to get his old Ironhead all fixed up to come race with us for the first time in Georgia. He came, he raced, he crashed into the airfence... he had a blast!!! Good job on the rebuild and for winning the Motul Cleanest Bike Award! Enjoy that backpack full of Motul cleaning products and a few bucks to fix her back up. 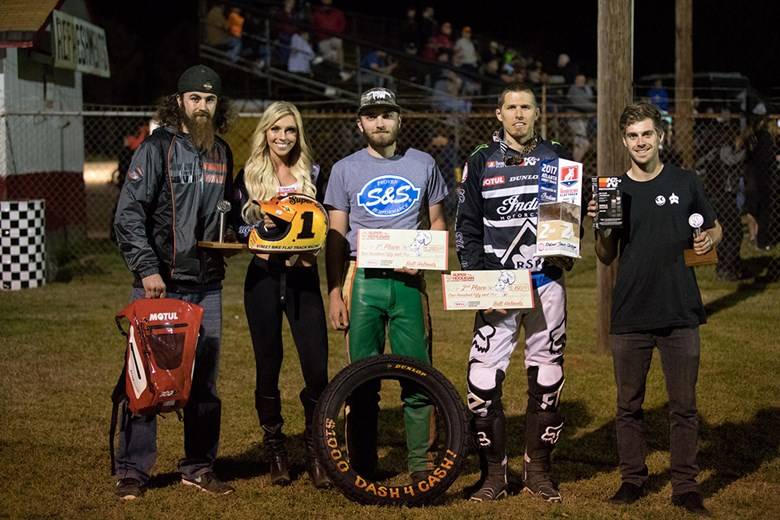 For the Pro guys it was another fierce battle for top honors in the AFT Twins with Jared Mees on the No. 9 Indian Motorcycle Rogers Racing Scout FTR750 locked in a back-and-forth battle with Sammy Halbert on the No. 69 Estenson Racing Harley-Davidson XR750. The pair made contact, resulting in Halbert ending up sliding down the clay track on his back, down the front straightaway and into the wall, bringing out a late-race red flag. When the race restarted, Mees pulled away in the ensuing five-lap shootout to win by 1.185 seconds over Indian Motorcycle Racing backed by Allstate teammates Brad Baker on the No. 6 Indian Scout FTR750 and Bryan Smith on the No.1 Indian Scout FTR750 making it the first podium sweep for the newly reborn Indian “Wrecking Crew”.

After the crash, Halbert got moved to the back row of the 18-rider field for the restart. With only 5 laps left in the main, he charged impressively hard and shot through the pack to finish an eventual sixth.

“Sammy led pretty much all the race before I started to come into play towards the end,” said Mees, who scored his 18th career victory. “We just started slide-jobbing each other. He’d get underneath me, then I’d get back underneath him. He was trying to protect the lead coming down, and I was coming up where the start/finish line has an arc. We just got together and he ended up with the crappy end of the stick. That’s racing when you’re going with five laps remaining for a Grand National Championship win. It’s hard.” 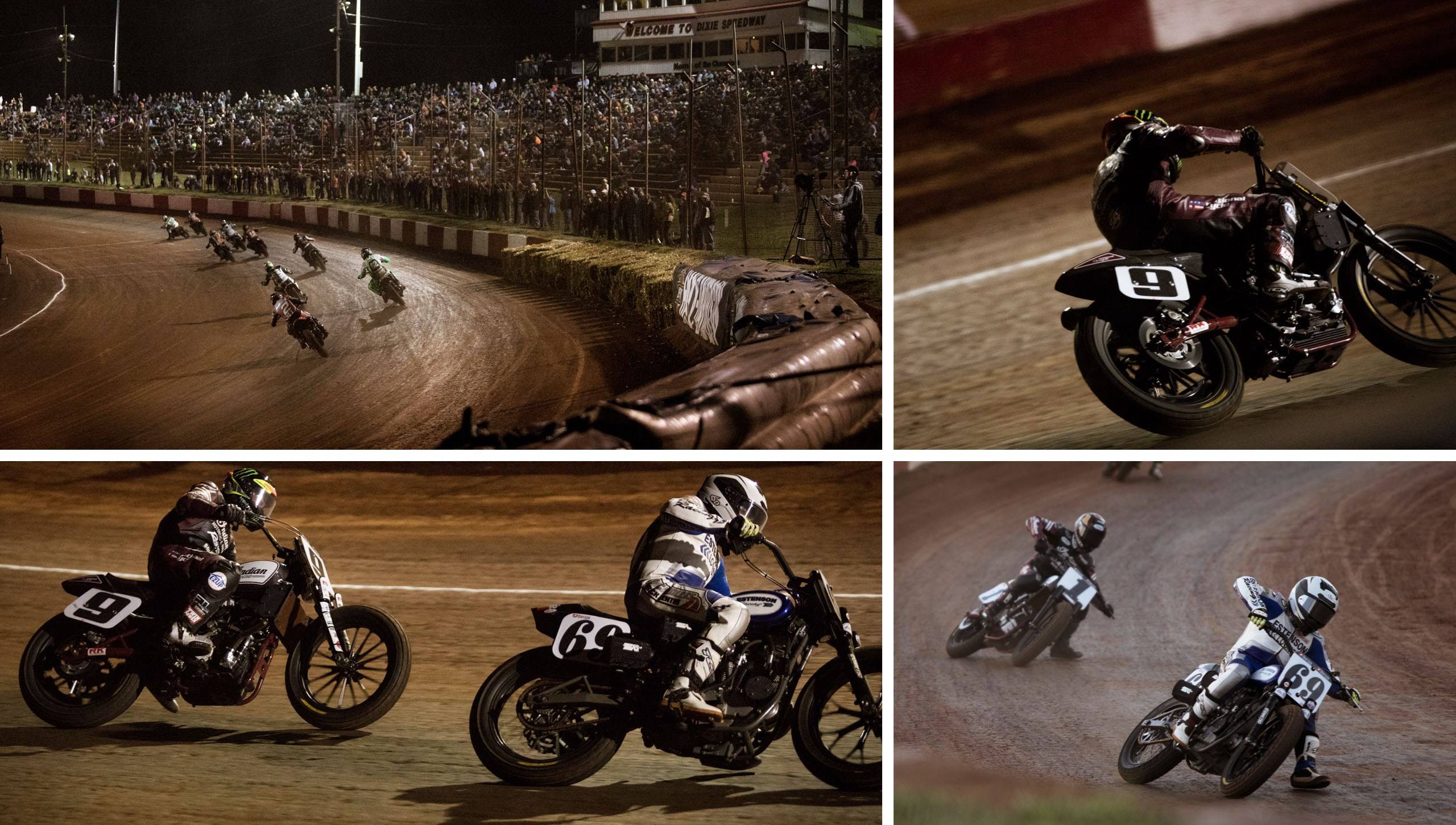 Being able to see both Pros and Hooligans on a track like this brought a rush of inspiration over the crowd and one can only hope that it stuck with a few of those kids who were clinging to the wired fence or on the shoulders of their parents. Eyes wide, faces dirty as they watched racing history being made and an evolution from back yard fun to an organized profession. It’s memories like these are like this red Georgia clay that don’t wash away. 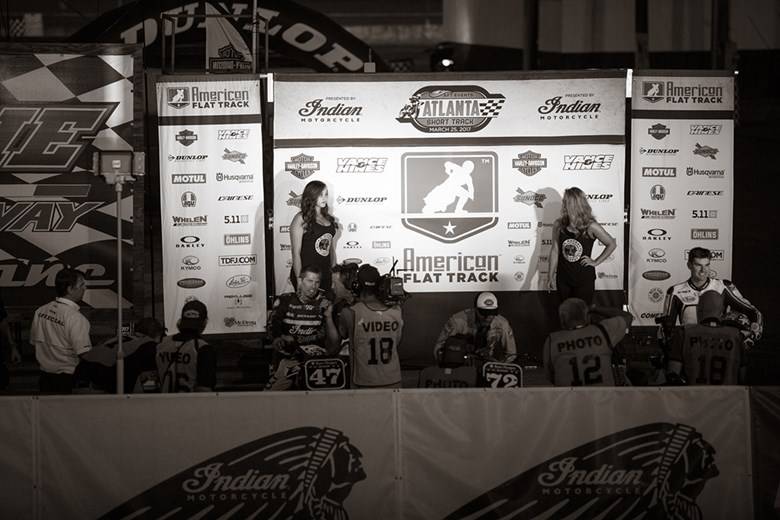 We are excited to bring you the Round 3 of the Super Hooligan National Championship Series (SHNC), in conjunction with the American Flat Track (AFT) Grand National Championship. Atlanta Short Track at Dixie Speedway in Woodstock, GA on March 25th, 2017. We’ve got a limited amount of spaces available, so get your entries in ASAP if you want to be part of the Super Hooligan show. We’ll be included in the NBC Sports Network televised racing action with AFT. Dixie Speedway is a banked, 3/8-mile track on Georgia red clay that you won’t want to miss. 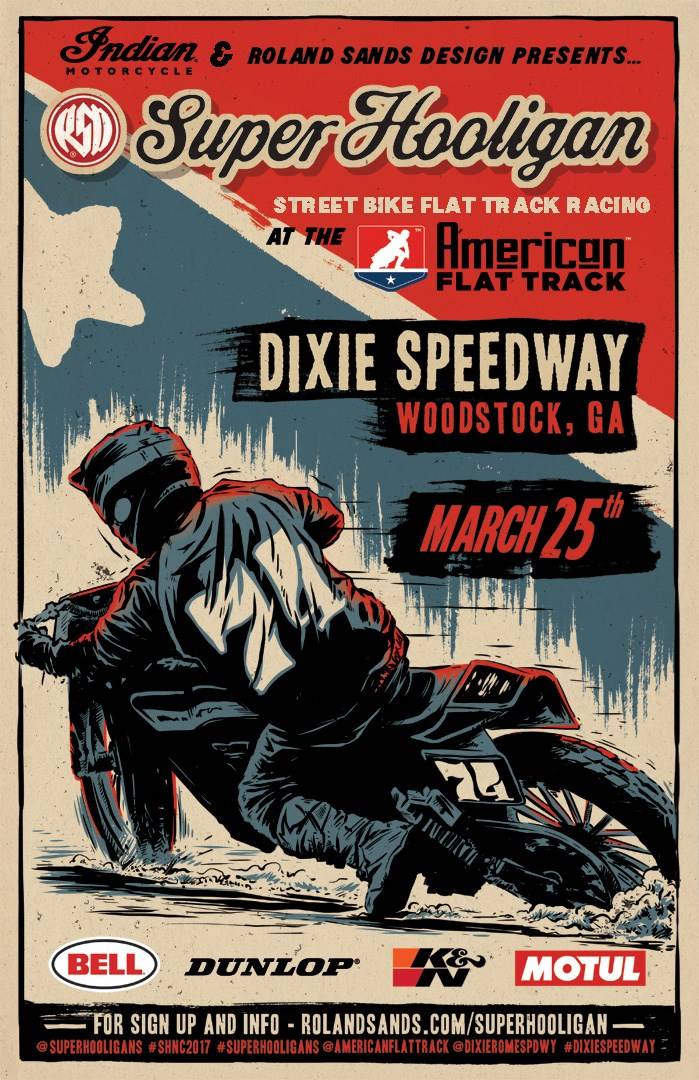 We are working on transportation to the race as well. If you are interested in transport for your bike, please email us separately to reserve your spot. 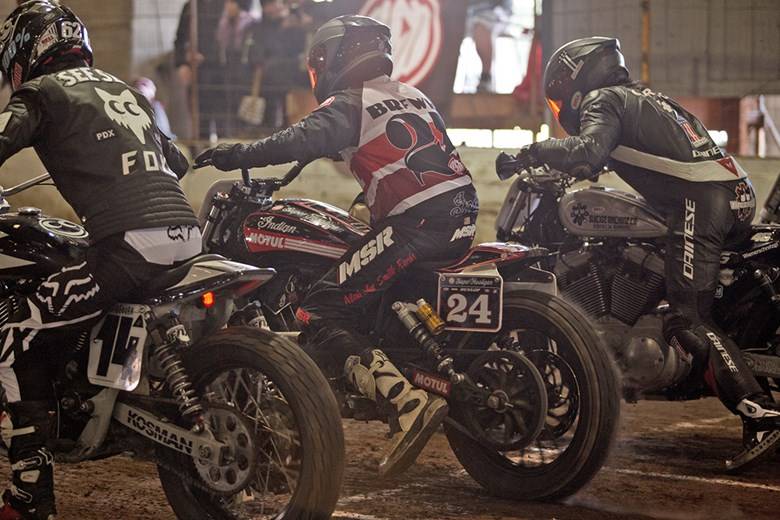 Indian Motorcycle will be providing a $1,000 Super Hooligan purse, along with Dunlop’s $1,000 dash 4 cash and other contingencies and prizes from RSD, Bell Helmets, Dunlop, K&N and Motul USA.

Championship Points will go towards the SHNC points fund, where the champion of the series will be crowned at the final round and will take home a Factory Indian FTR750 professional GNC flat track race bike and a $2,500 bonus from Bell Helmets.

See you there. Let’s get Western in the South!