If you googled Lemoore before you drove up, you would of known it’s barely wetter than a desert, and wouldn’t have been surprised at how dry it was. 100+ degrees in the shade, brains were boiled and it sure didn’t let the water hangout. Kings speedway is a car track, so I’m sure with four tires its plenty smooth, but it definitely is not a smooth track on a bike. That combined with a dry, loose, and slippery bank made for a few sketchy practice sessions. Luckily for everyone, the track was completely different at night. The clay let the water come back right after the sun went down and the track, “actually got good” according to the voice of the pits.

If we showed you an aerial photo of Lemoore and told you there were a couple race tracks and a giant wave pool you would probably think we were full of shit. The race tracks made a lot more sense than a wave pool until we went to the Surf Ranch Pro and saw the wave pool for ourselves. Why aren’t these in every city in America? Kelly Slater and his team spent $30m building, developing, and perfecting the first one, but they say future waves can be built for $2m-20m. Whaaaat! Thats in the realm of some skatepark builds. This will 100% change surfing. 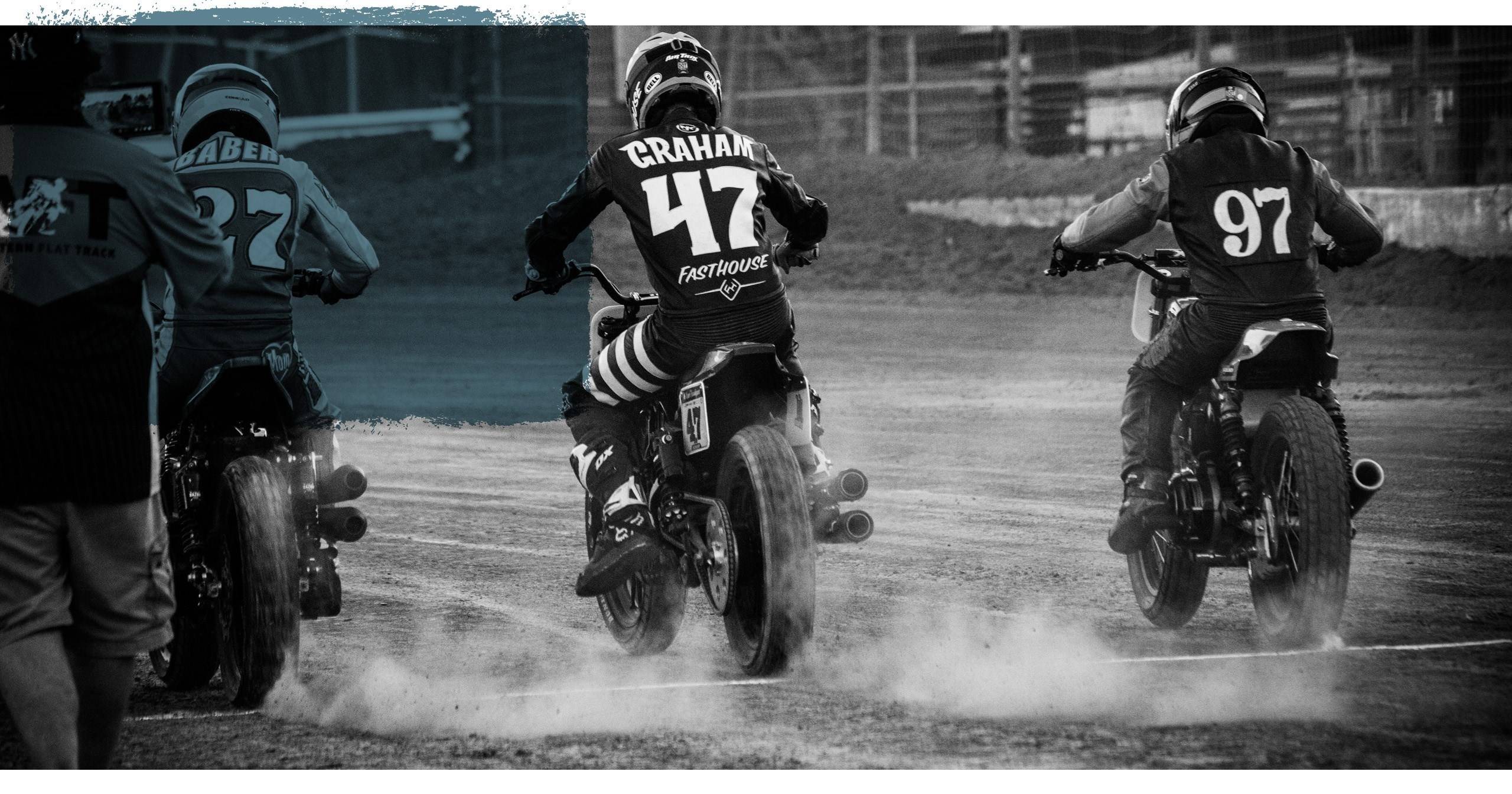 Baber, everyone’s favorite redneck makes the 1500 mile trek from Iowa every weekend to race. He works 9-5 as a tech at an Indian dealership to stack enough money to race his Harley. He built his bike out of a friends crashed sportster. His gear will never match his bike and I don’t think he owns a teeshirt. He eats through a whole pack of cigarettes on race day and chews a can of tobacco in between that. He dips while he rides, and swallows like a man.

If there was ever a racer who was the exact opposite of Jordan Baber and that guy had an identical twin who was even less like Baber...that’s who Andy Dibrino is emulating. Andy gets drunk on 2 hard ciders and hangs his own NO SMOKING signs around his pit. These guys couldn’t be more different, but you probably wouldn’t know it looking at their results. They sit on top off the championship series in 1st and 2nd and even though Andy has stretched his lead a bit in the past few races, the championship is still too close to call. Who’s your money on for the championship? Jordan Baber, everyone’s favorite redneck Corn star from Iowa. Or Andy Dibrino aka Randy From Reno who is impossible to hate? 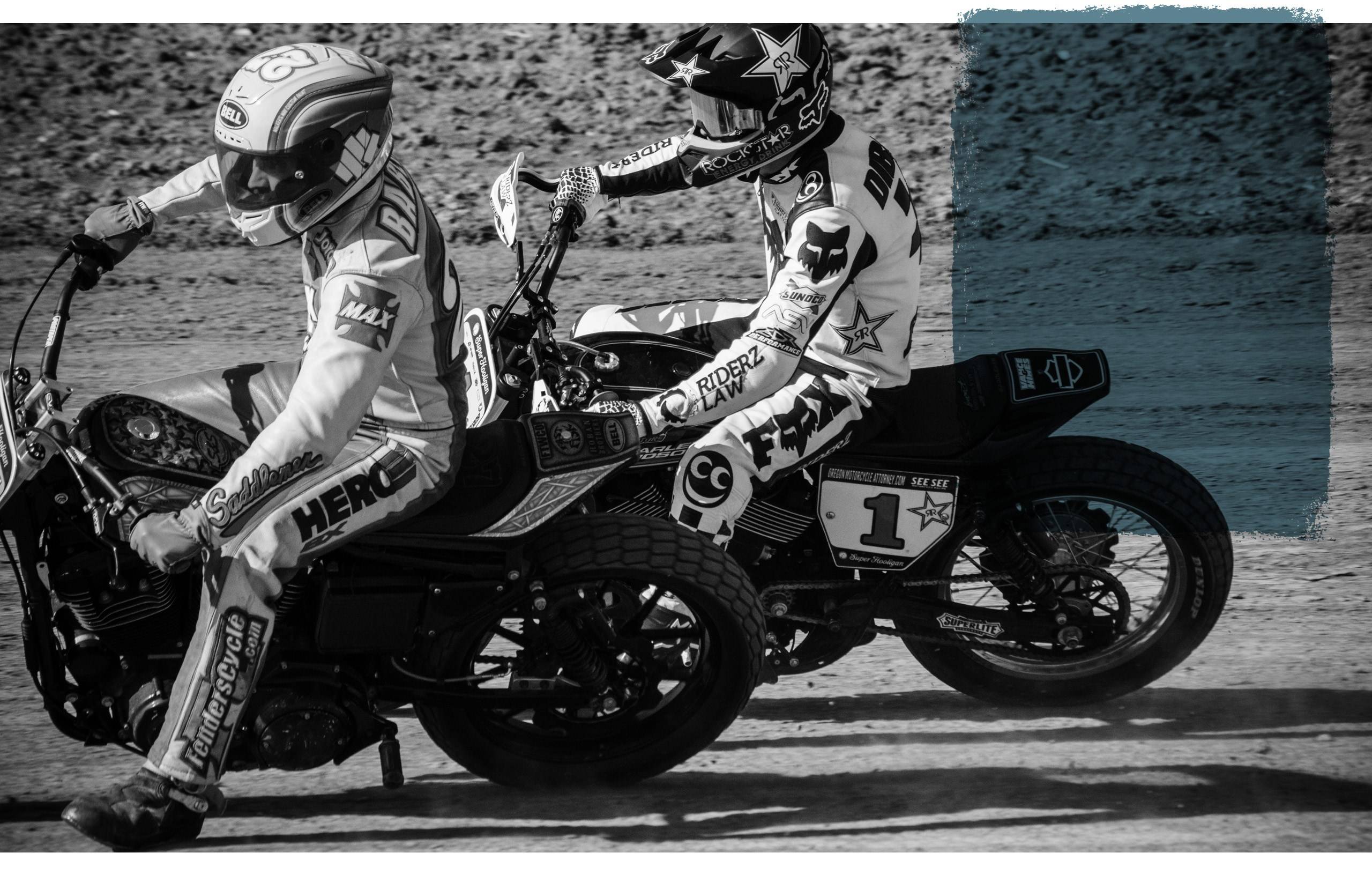 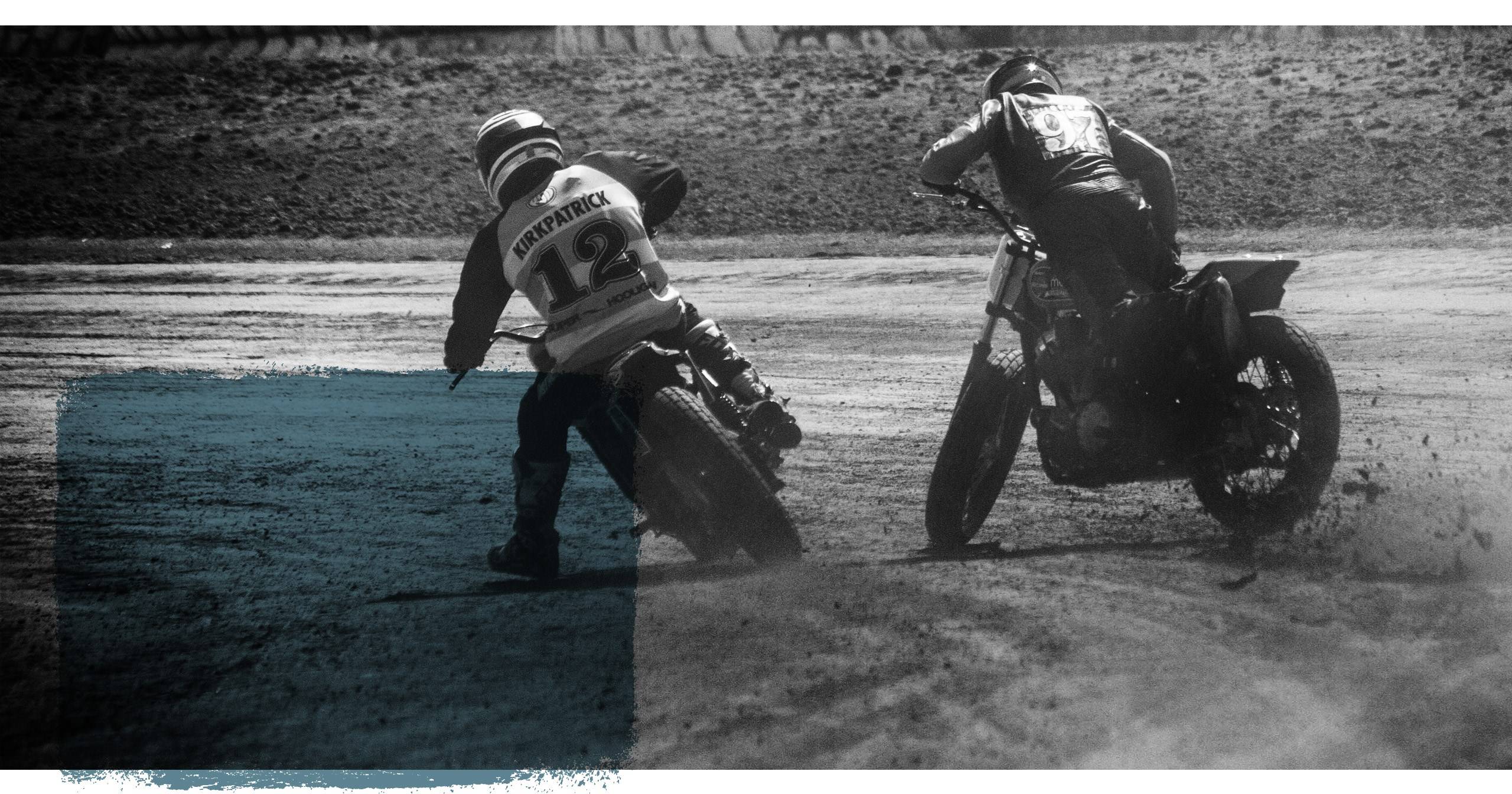 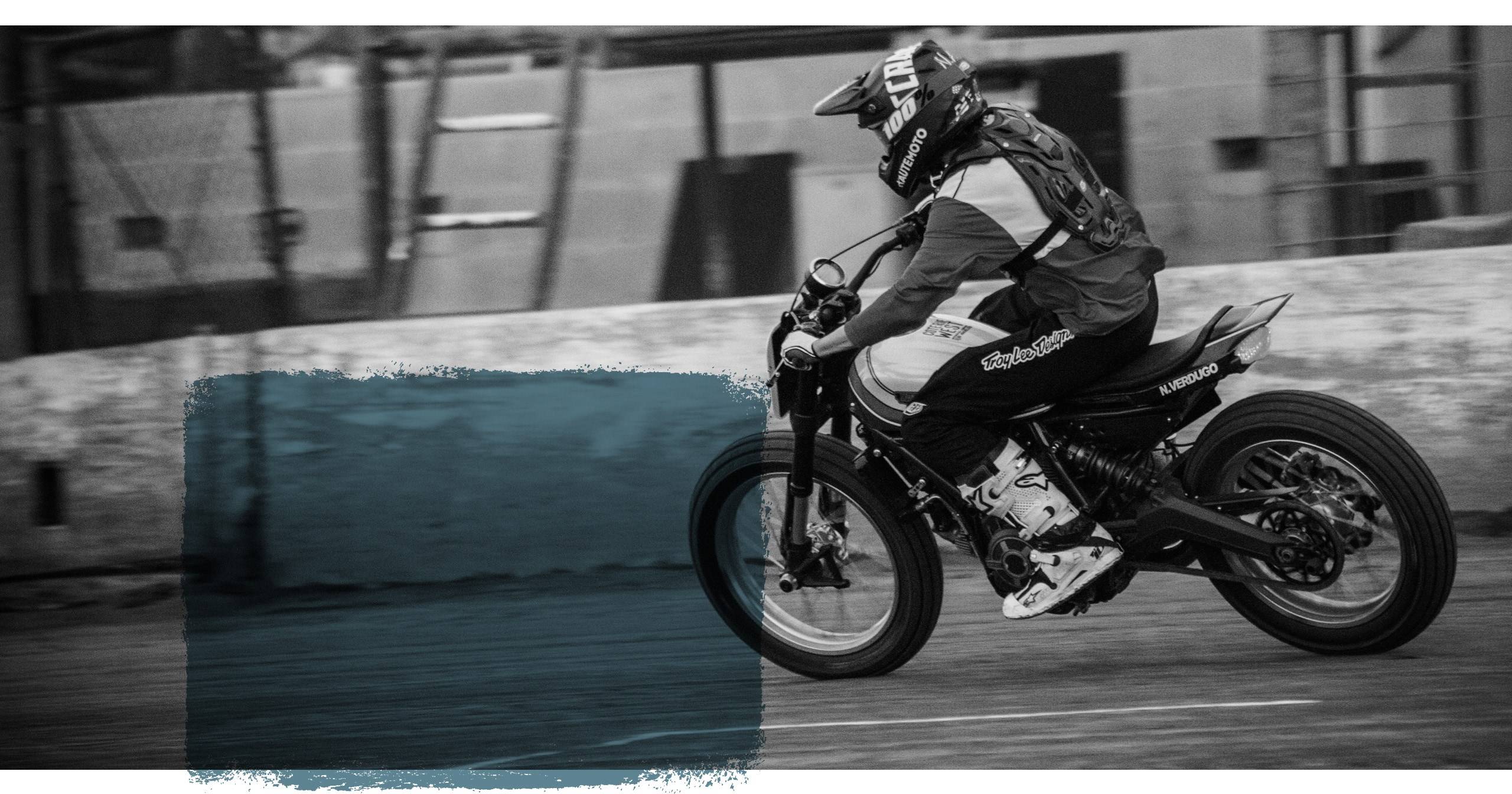 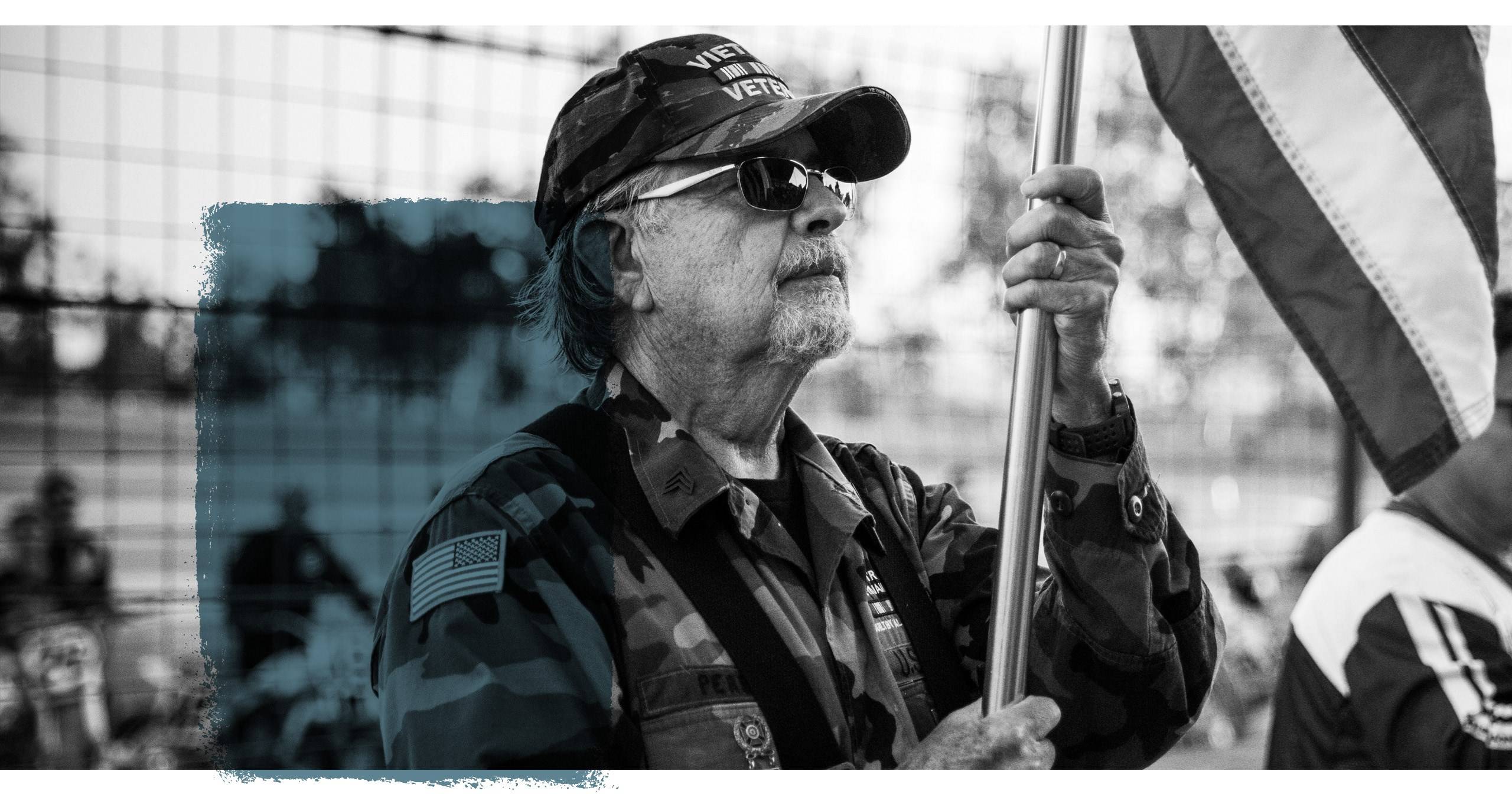 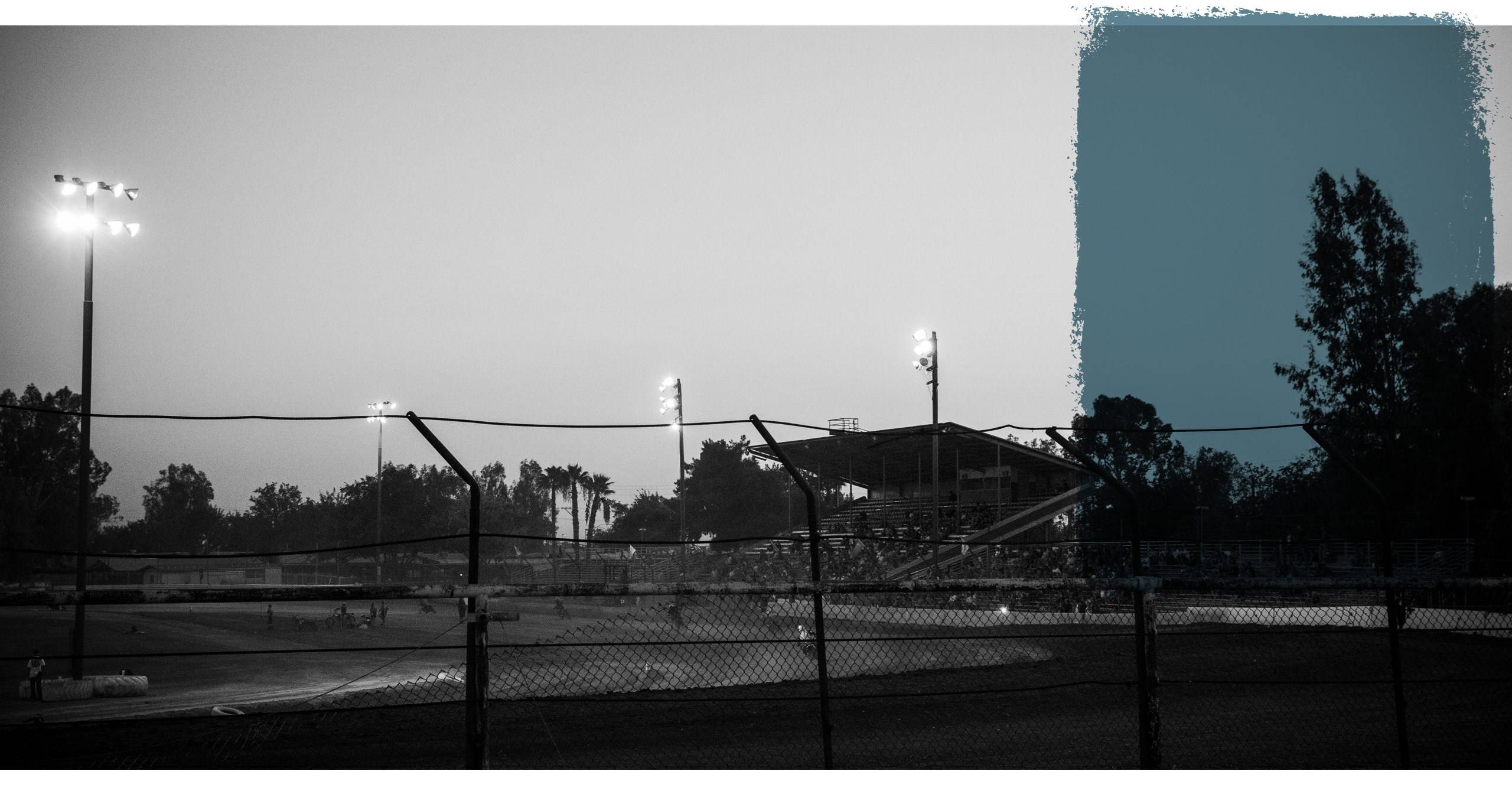 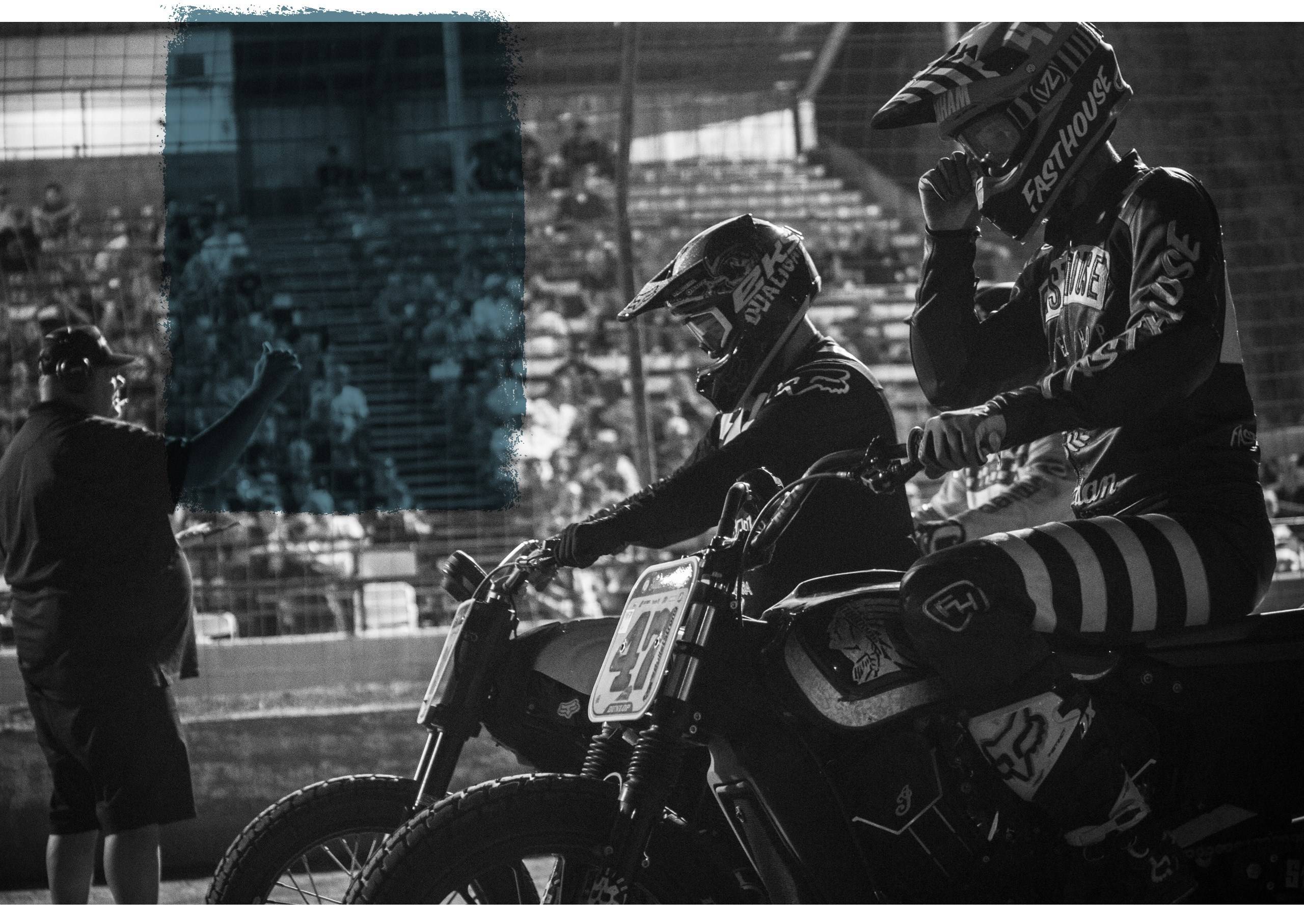 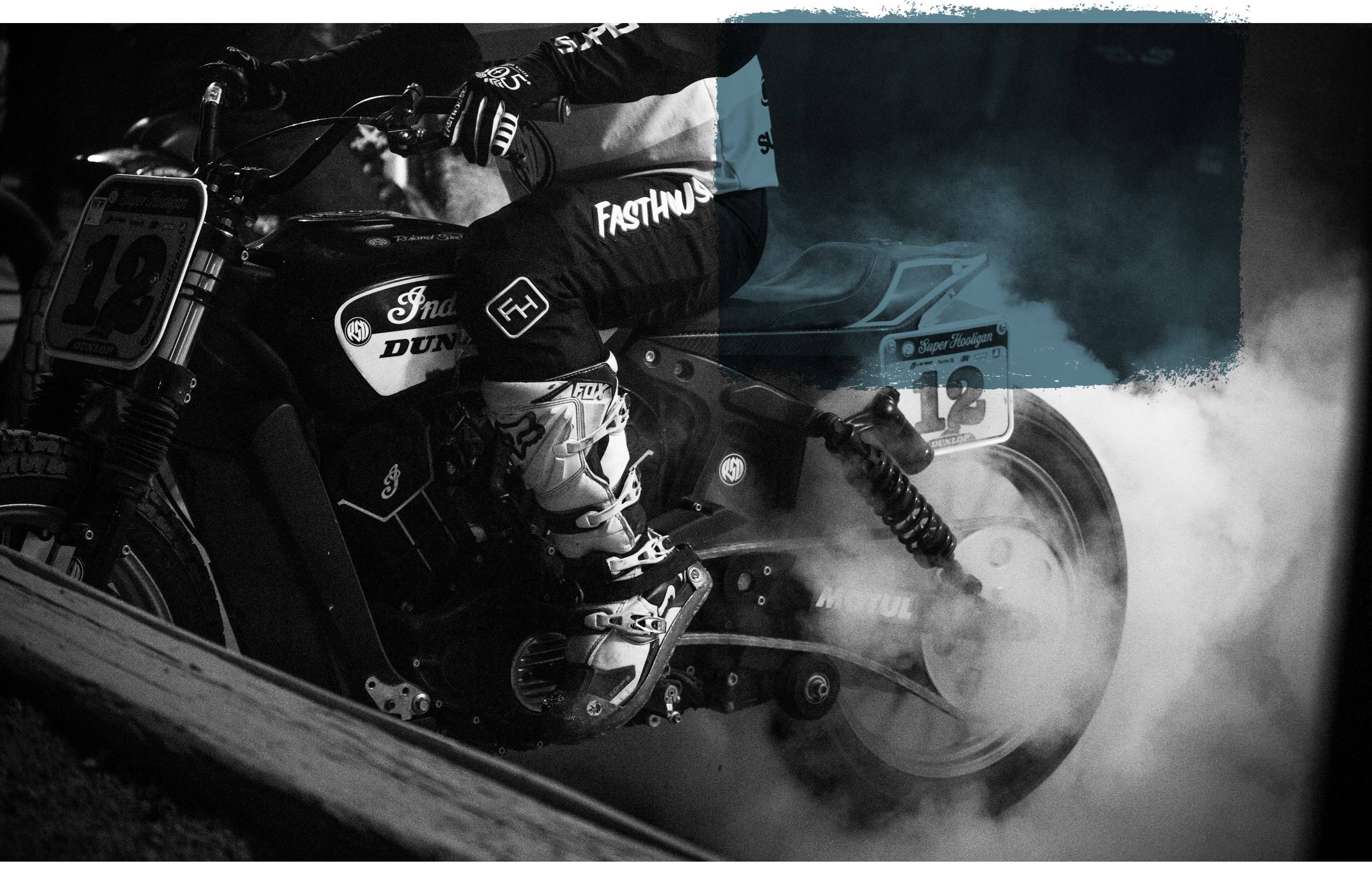 Aj Kirkpatrick didnt make the podium this round but he definitely won the podium celebration. Have you ever seen a burnout add elegance to an event? Aj popped his burnout cherry and must of clicked 9th gear before his wheel wore down to the sprocket. Once he was done there was enough smoke in the air to give all the water bottle whiskeys that were snuck in a nice smokey flavor. I don’t usually rate places based on the percentage of smokey entrees being served, but if I did, the kings speedway would of gotten a 10/10 and I would have recommended it to all of my linkedin friends. 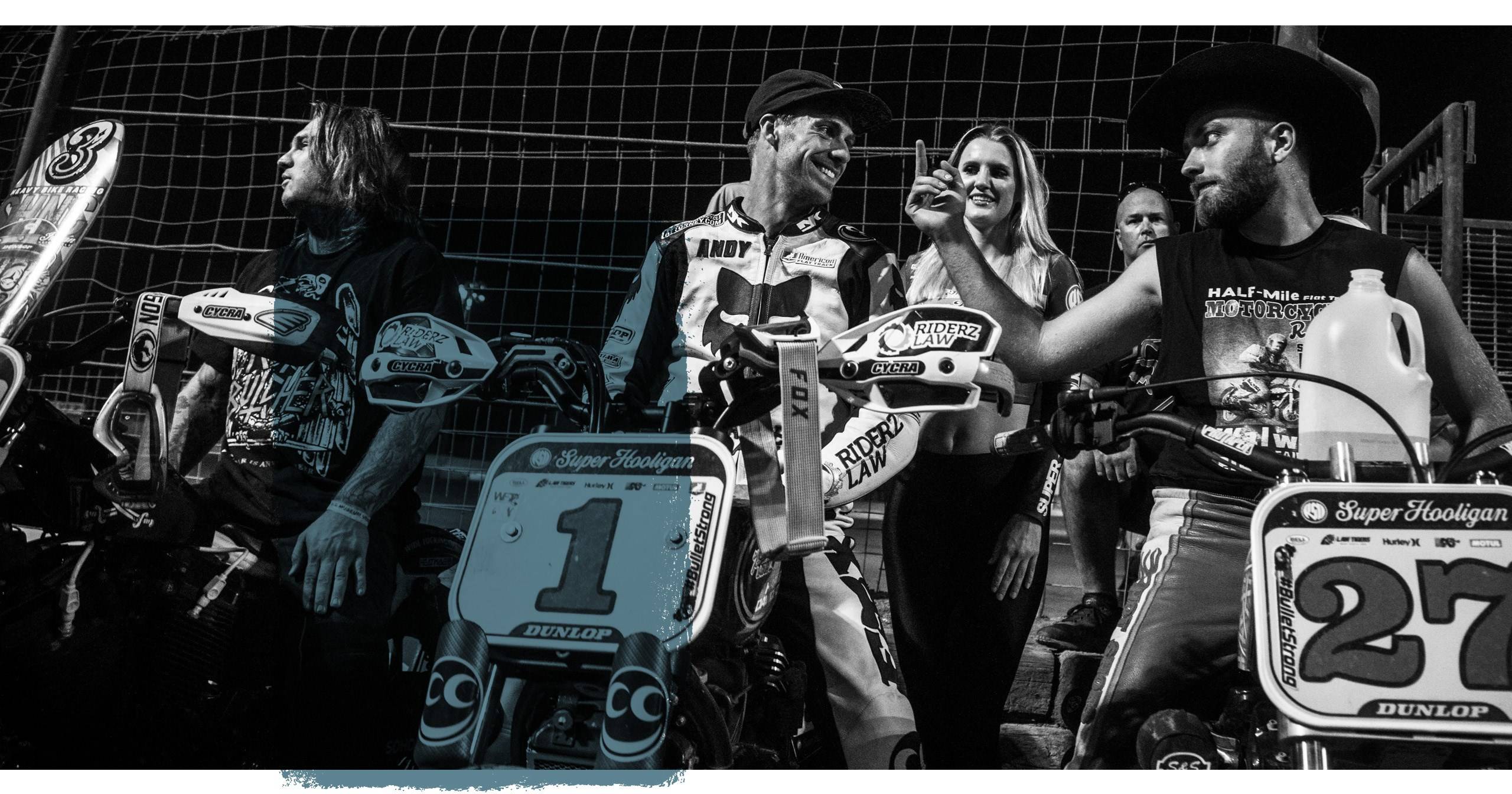 Once the temps dropped, we fired up the Surf and Turf grill for some good old fashion Track Beef. I doubt NBC will be televising hooligan racing anytime soon if Andy and Jordan are on the podium together. These guys are like a couple heartbroken lovers blood thirsty and wishing the worst on each other. In the past Babers usually fired up about something Dibrino’s done on the track, but Friday night Dibrino was as clean as his police record. He checked out with a pretty solid lead and as much as we would have loved to see a little track battle on the last big track of the series (baber loves big tracks) Baber didn’t have much for Andy on his under powered, but properly geared xg 750.

I’m sure Andy felt a lot more comfortable about his point series lead before uncle grand Marshall, Roland reminded him that the last 2 races of the series are a double header worth double points. Unfortunately for Andy but fortunately for everyone else, its still anyones championship. Now you understand why Baber is so fired up. Plus Baber is a big track guy and this was his last chance to take advantage of his extra sender mentality because the double header/double points races are both tiny technical tracks where dibrino seems to dominate on his lighter bike. With the double double in the distance seems everyone still has a pony in the race. Plus, everyone drops 1 race before the points are added up. What im saying is, if youre not at the moto beach classic youre double double blowing it! 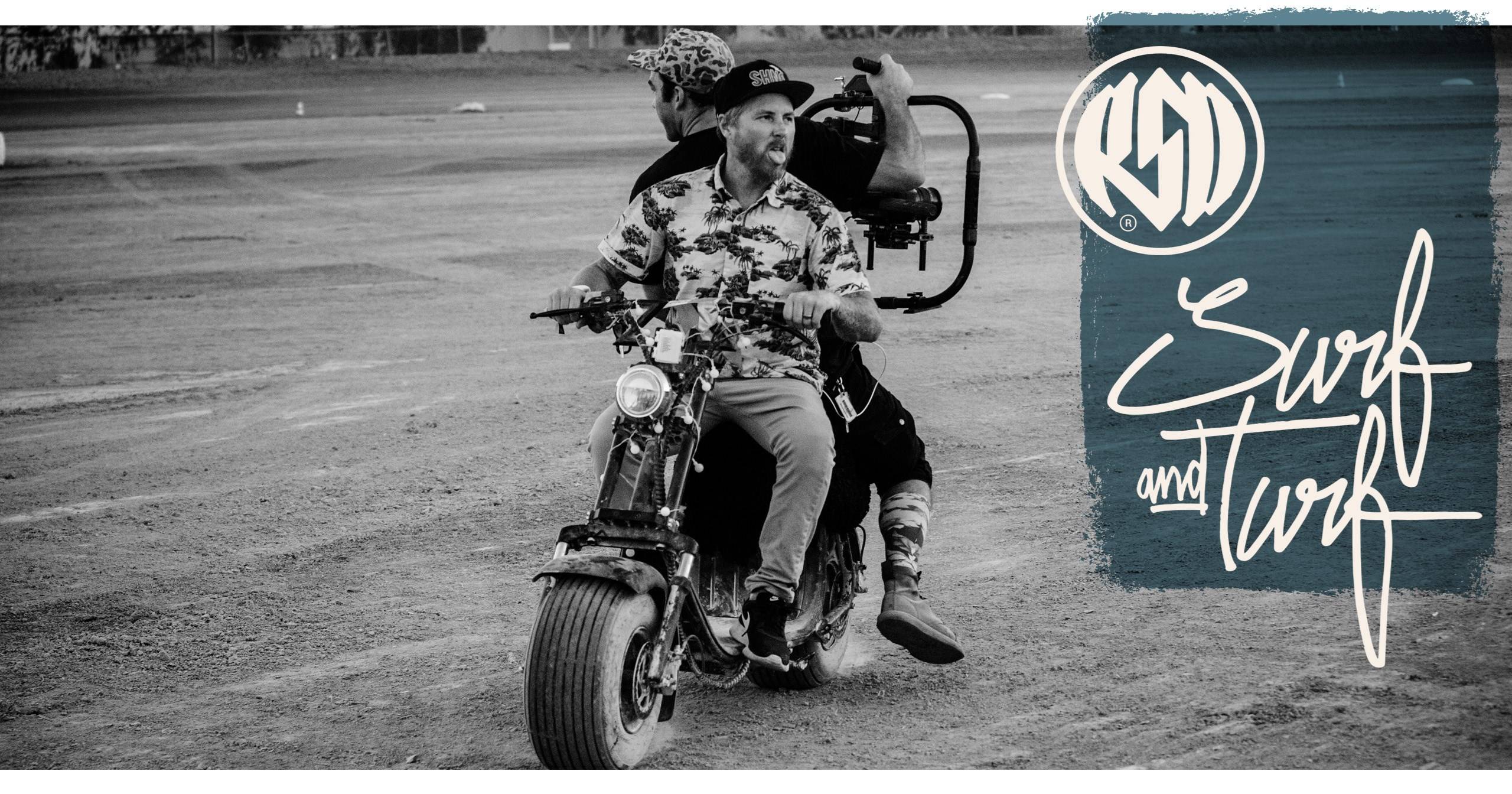 Round 8 of the Super Hooligan National Championship (SHNC) series heads to Central California for a little Surf & Turf. With the support of Hurley, the SHNC has partnered with the World Surf League (WSL) as the official Friday Night Pre-Party for the inaugural Hurley Surf Ranch Pro. The Hooligans will race, Lujuria will perform, and the worlds top male & female surfers will watch and probably pick up some techniques on battling for position in the line-up from some of the worlds best flat-trackers.

Want to race? There's a class for just about everyone! Click the link below and lets get sideways. 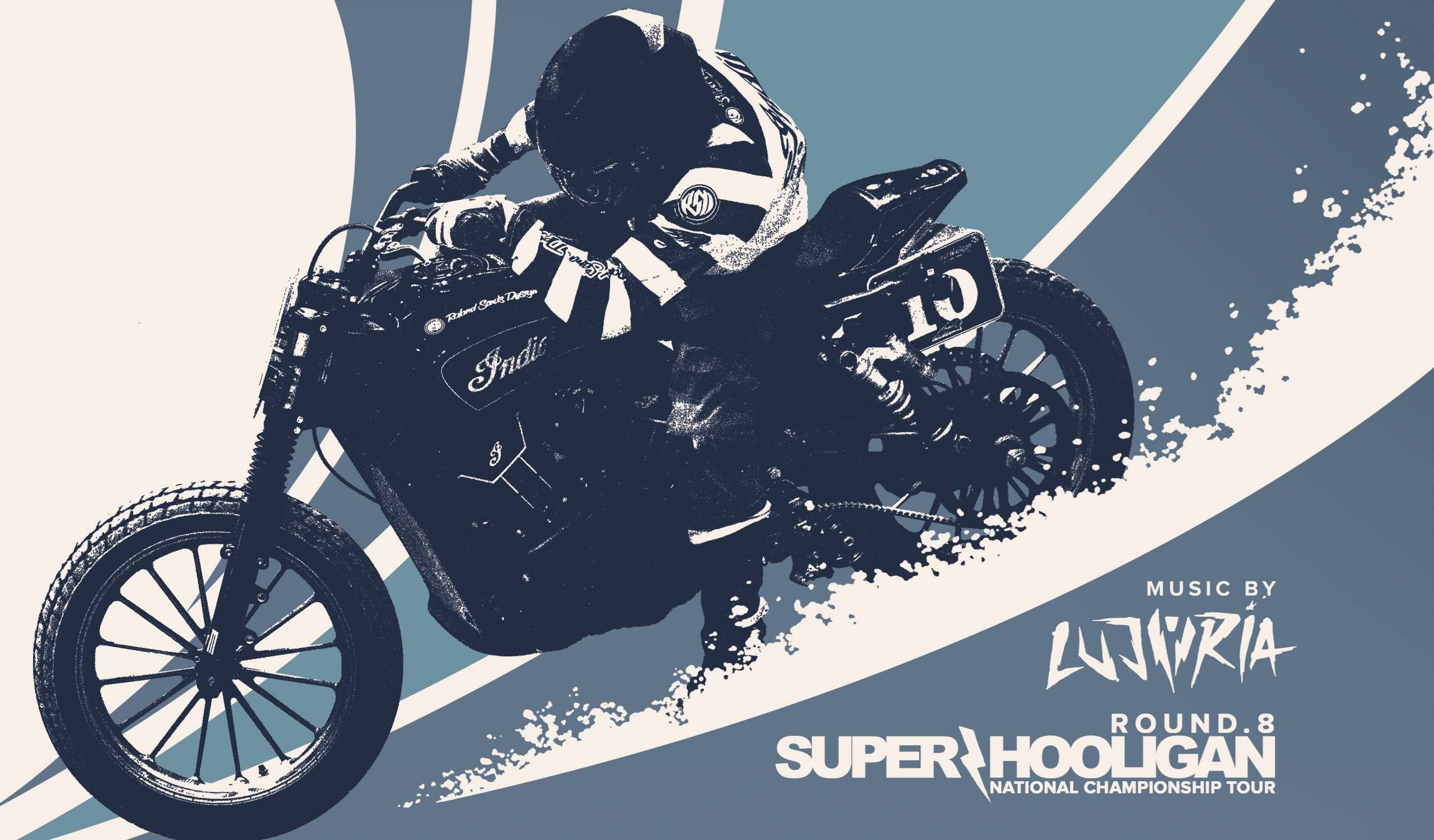 GET 50 % OFF ALL GA WSL TICKETS including weekend and single day passes
Promo Code: HURLEYMOTO50

For more information on the event, visit: www.wslsurfranchpro.com.