In association with the annual The 1 Moto Show custom motorcycle show in Portland, The 1 Pro flat track races commenced once again upon the 1/10th mile banked clay oval at Salem Indoor Speedway on Sunday. This year’s races marked the first round of the innagural 10-race Super Hooligan. All hosted by See See Motorcycles’ Thor and Tori Drake, who are always smiling and spreading good vibes. See See also throws the US version of Dirt Quake every year up at Castle Rock race track at Mt. St. Helens, which is one of the most unique campout/party/flat track racing combinations to ever experience.

The Pacific Northwest is known more for being rainy, damp and free spirited than it is for racing and competition but don’t be fooled. There are some real fast dudes riding motorcycles in the soggy land of freedom. Oregon and Washington have raised some of the top flat track contenders around as well as lots of real fun people to be around. For example, legendary Grand National pro racers Brad and Scotty Baker, Smokin’ Joe Kopp & Sammy Halbert all hail from the land of the pine trees.

Super Hooligan racing has been growing and attracting the attention of some of these fast guys. Seems like almost every race one of these guys, that you wouldn’t expect to ever want to ride a 500 lb bike, gets excited about throwing their leg over one and joining the party. Truth is, they are a challenge and not every pro is guaranteed any result in racing them. Getting these guys out racing with the regular everyday Joes has proven to everybody that being fast on a proper race bike, doesn’t mean you can hang with the Hooligans with more seat time aboard their modified street bikes.

Super Hooligan racers came from all over for some fierce racing on the sticky clay track. Indians, Harleys, Ducatis, Buells all lined up to battle for the checkers. Being the first round of a 10-race National Championship Series, over $2600 in purse money up for grabs from Bell Helmets, Dunlop, K&N and Motul, plus a brand new Factory Indian FTR750 Grand National professional race bike and $2500 bonus as the championship prize, everyone was hungry for battle.

The RSD Indian Motorcycle wrecking crew for the weekend was made up of regular team riders Cameron Brewer, Jordan Graham, Troy Hoff, plus weekend warriors Joe Kopp and Sammy Halbert.

Riders lined up for 4 separate heat races, with the winner of each advancing to a $1,000, winner-take-all DUNLOP Dash 4 Cash before the main event. Sammy Halbert, Andy DiBrino, Chris Wiggins and Josh Johnson made up the field and Halbert & DiBrino fought bar-to-bar for four laps, putting on a show for the spectators. Everyone was on the edge of their seats watching what was one of the best Super Hooligan races to date. Halbert came out the victor and took home the winnings and a hand painted Dunlop tire trophy.

The excitement rolled into the main event which consisted of a couple of crashes and restarts which always makes things interesting. Especially with over a thousand bucks from Bell Helmets and Dunlop are up for the taking for the top 3. Chris Wiggins won the $300 K&N holeshot award and even lead both of the restarts as well. He held off GNC pro Sammy Halbert for a couple of laps until Halbert put some moves on him for the lead pass. He faded back quickly over the 12-lap main and gave up the podium to (1) Sammy Halbert #69 on a RSD Indian Scout, (2) Brad Spencer #7 from San Jose on his Sportster and (3) Andy DiBrino #14 from Portland piloting the See See Motorcycles XG750. Kopp ended 4th and Graham 6th on the Indian Scouts. 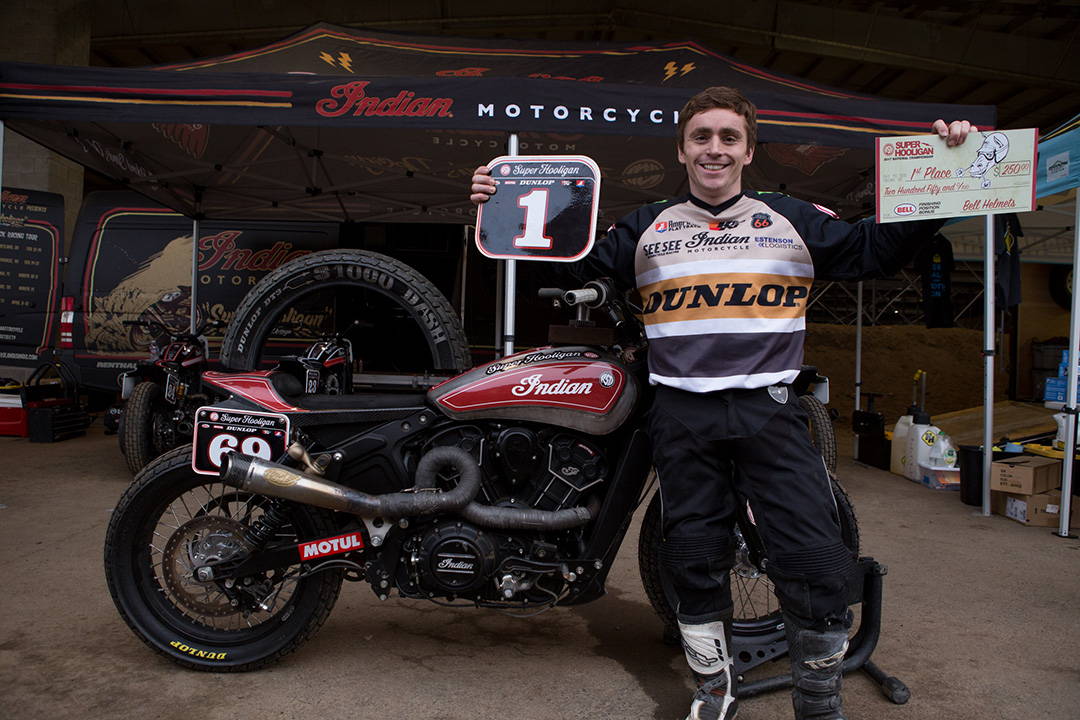 Halbert isn’t planning on giving up his American Flat Track pro racing career to be a “Hooligan” just yet but was impressed by the talent of the class. He’s been following what guys have been doing on these big bikes and knew a win wouldn’t be a “gimme”. He had to work for it more than expected and left with some mad respect for how hard these Nine-to-Fivers ride.

Scott “T-Bone” Jones from Noise Cycles finished up his new XG750 a couple of days before the races and burned rubber up to race it. He built a super nice bike (using RSD Traction Race Wheels to boot) and took home the Motul Cleanest Super Hooligan Bike trophy, $300 and a whole assortment of Motul’s new line of moto detailing products!

Next race of the @superhooligans National Championship Series is round #2 – Mama Tried’s Flat Out Friday concrete indoor in Milwaukee, Wisconsin on February 17, 2017.

The One Motorcycle Show 2017 from See See Motor Coffee Co. on Vimeo.

Super Hooligan is heading back to “The One Show” bringing the thrills and spills of Street Bike Flat Track racing to the Salem Indoor. This will be the first round of a 10 round Super Hooligan National Championship series. Full details to be released next week. We have a great schedule comprising of the best bike events across the country. We’ve got purse paying races, a huge Championship bonus, and we get it all kicked off at The 1 Pro in Salem on February 12th. 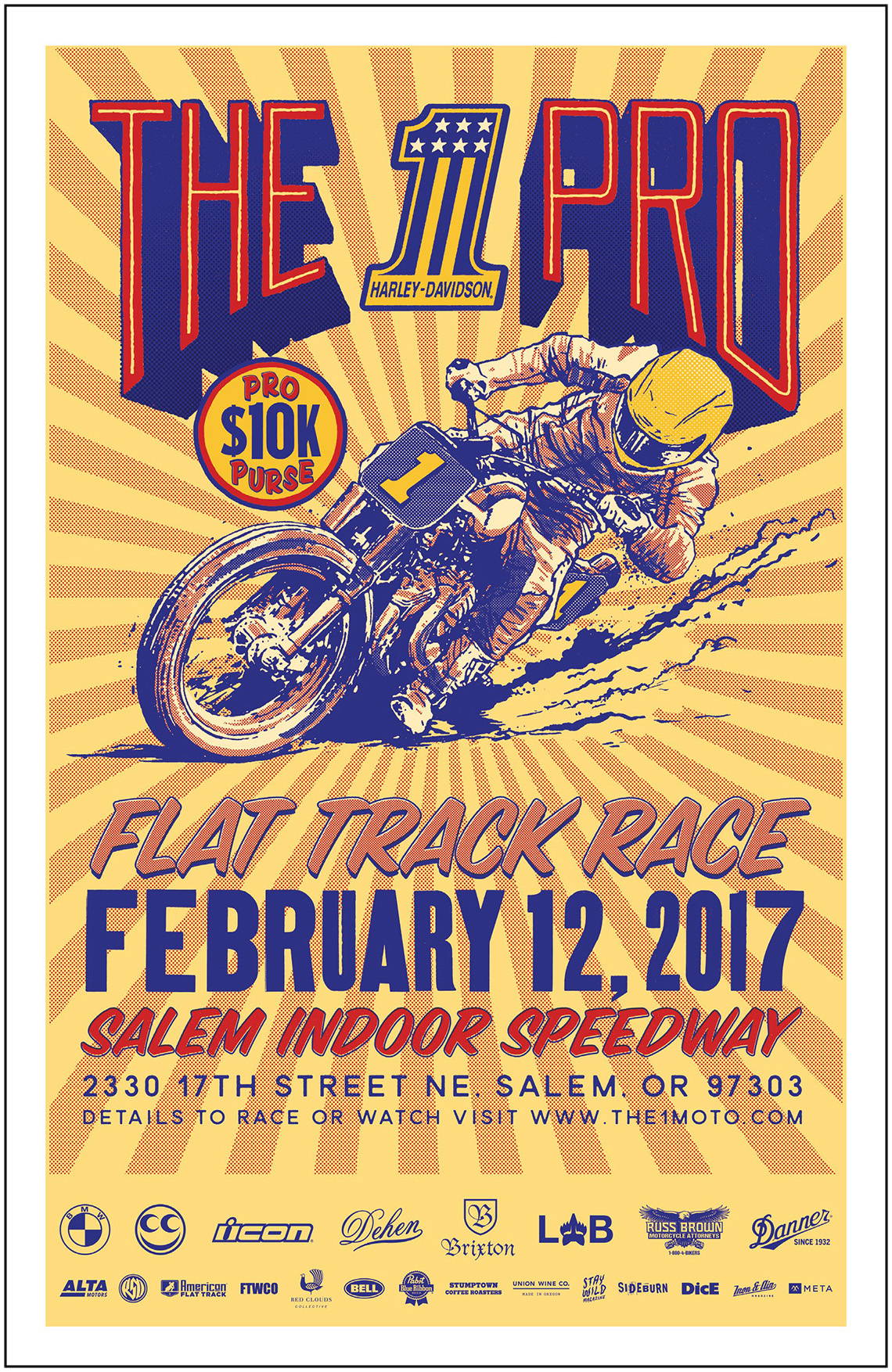 It's that time of year again where you call up your best bud, ask him (or her) if you can crash on their couch, borrow their bike and possibly their girlfriend (or boyfriend) and head to The One Motorcycle Show! This February 10th-11th-12th marks the 8th annual One Motorcycle Show in Portland, OR and we couldn't be more excited!

This years show will be held in a North Portland Industrial building with a thick history of hard hands-on Foundry work that can be found deep within the walls.... a perfect building to host one of the greatest indoor motorcycle shows in the country! So mark your calendars and tell your bosses you'll be out of the office to check out bikes, beers, music and friends! Show starts at 6pm sharp on February 10th! AS ALWAYS THE SHOW IS FREE ENTRY TO ALL and we're family friendly! See See Motorcycles and Harley Davidson will be presenting The One Motorcycle Show and 1-Pro races in Salem on Sunday!! For more information and FAQs please head over to www.the1moto.com RACING WILL START AT 12 NOON ON SUNDAY FEB. 12TH AT SALEM RACEWAY!! 10K PURSE!!

THE ONE SHOW PRO FLAT TRACK RACE IS HELD IN CONJUNCTION WITH THE ONE MOTORCYCLE SHOW!  It is open entry for both Pro and Amateur riders. Pro classes will have cash prizes and will be run in accordance to Pro regulation. Amateur races will be run as normal club-level racing. This race is a chance for pro level riders to make some cash and get exposure before the Pro season starts. Pro races are for expert level racers so please do not enter if you are not experienced enough. Amateur races are a chance for Amateur level racers to race in front of a big crowd alongside the Pro Racers. 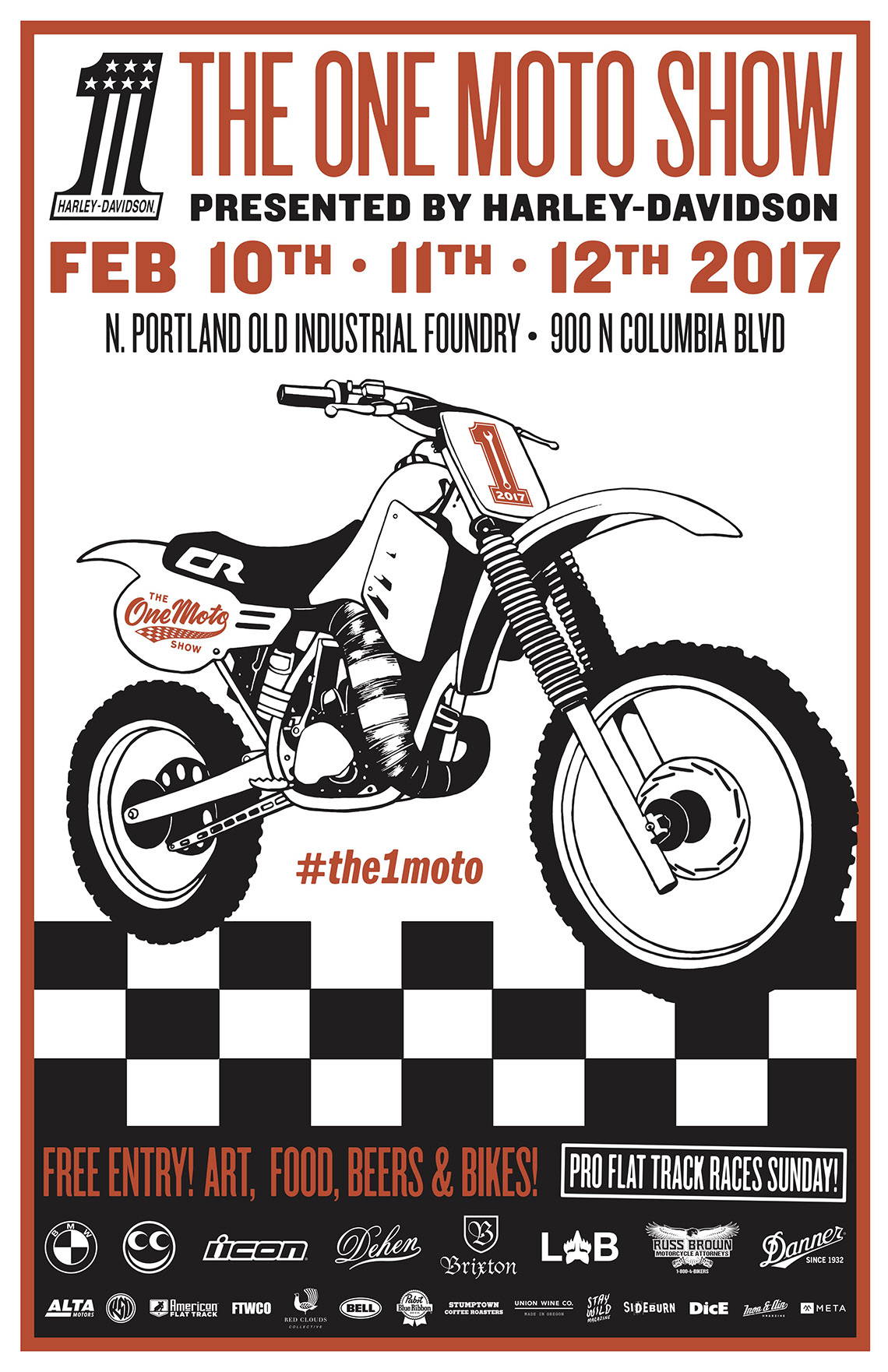