Written by: Jamie Robinson from MotoGeo
Wheels and Waves California 2017
Sprayed with mud one day, burning rubber on the rev-limiter the next, this kinda sums up my 3 days at the ‘Wheels and Waves California 2017’ experience, and it was all done with a huge smile on my face! This special, invitation only event was fun right from the get go. The start of this French-born, now International bike meeting was at Santa Maria Raceway for a bit of sideways flat-track action. The two classes to enter were Vintage/Amateur or Hooligans.
Unfortunately I didn’t have a Vintage bike but my friends at British Customs did have a street-Flat-tracker, so without hesitation, we teamed up so I could get all Hooligan on this stylish British machine.
For the flat-track, fitting the steal shoe is still a little alien, as is having no front brake, and turning the bike with the throttle is an art I am still trying to master. Throw in the mix to the Hooligan class, an ex GNC Grand National Champion, multiple Hooligan regulars, a grid full of beer thirsty nutters, and you’ve got yourself a race!
A few practice runs on the shiny street-tracker they call "The Tribute” by British Customs and I started to feel more at home. Somehow I made the finale by finishing 3rd in my heat, and now I had to race the fast guys. Having struggled to get a good feel for the track and bike in the sliming track conditions, I knew I was in for a whooping. 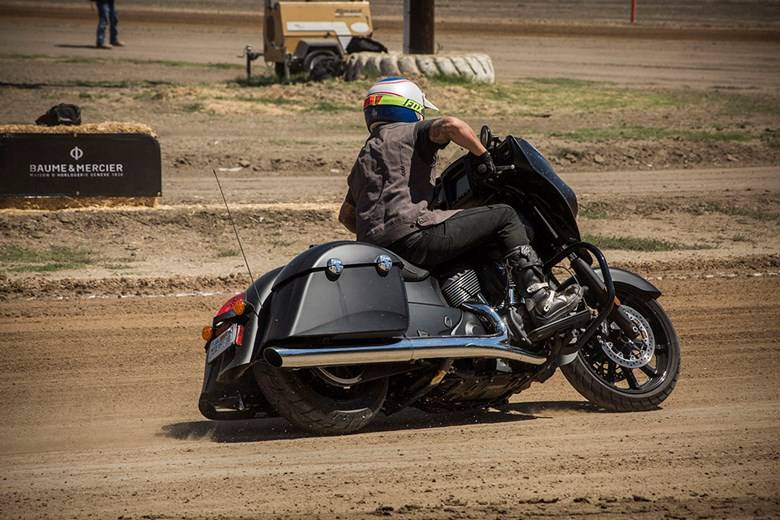 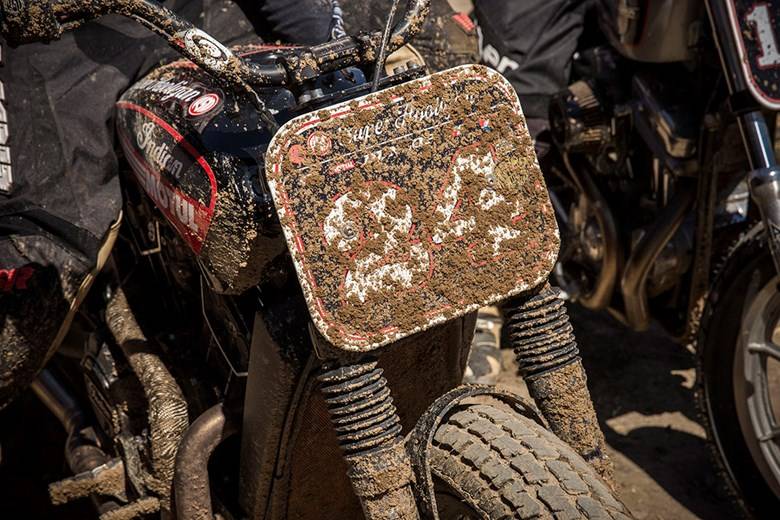 As the flag dropped, this mass growl of iron hurtled into turn 1 and I decided I’d go around the outside instead of get involved in all that elbow to elbow fighting on the inside, it worked out OK, I picked off a few places and now I was mid-pack.
The trouble now was at the next turn, I got sucked in by the faster guys in front and fearful of all those maniacs behind. I went in too fast, panicked, lost traction on the front tire trying to steer and nearly crashed. I barely saved it and by the time I got back on the gas I’d lost all and more of what I’d made up from my decent start. What a dick, nice one Jamie, now I am dead last.
It turns out that was just about as much action as I saw. The rest of the field cleared off. I passed two guys who were laying on the floor after crashing and the endless laps in the 105 degree heat. I was happy to get lapped by Joe Kopp, so the race could finish sooner. Flat track ain’t easy, these Hooligan bikes are not simple to ride and I basically sucked.
Final Standings for the day:
Super Hooligan Main
1st- #3 Joe Kopp
2nd- #7 Brad Spencer
3rd- #114 Chris McDougal
Dunlop Dash-4-Cash
#7 Brad Spencer
MOTUL Cleanest Bike
#53 Jason Klements
Fastest Slow Guy
#88 Jimmy Hill 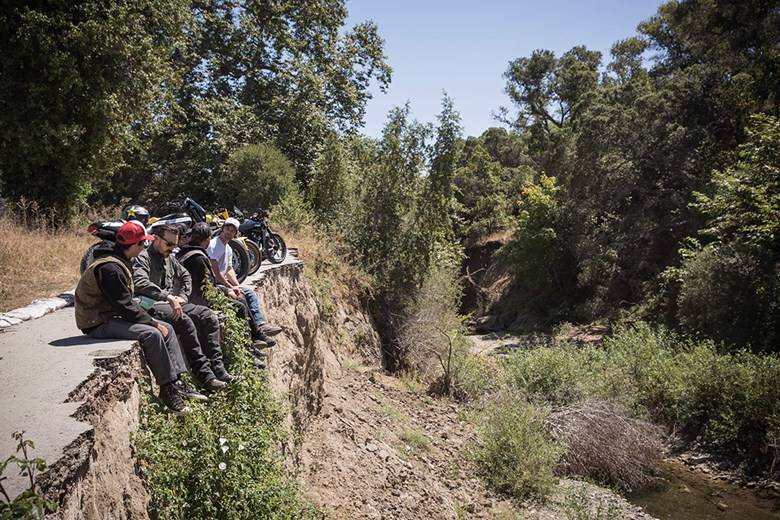 That said, who cares, I did it. We are all here to have fun with our friends, ride bikes and have a laugh. I did all of that and more. It was great having my wife Ely and my son Giacomo there also, a true family get together. After the races, we all rode up to a ‘secret location’ above Morro Bay on Highway 1 where an excellent meal was waiting for us while we enjoyed talking about the day as the sun went down. Later that night we parked our bikes, headed to the local Saloon and drank until they wouldn’t serve us any more. We then partied back at the RSD Air B&B until the sun came up. Sleep it seems, can wait.
The next day was a big group ride to lunch and even more riding in the afternoon. Due to our antics the previous evening, we (all RSD members and myself) missed the start and now created our own mini-adventure to the lunch spot. My ride that day was on the RSD BMW R9T, a unique and stylish boxer that handled the back roads with ease and we all had a blast shaking off our hangovers with a ride in the country. Good food, more riding, many laughs with friends and smiles from everyone ended the day. We then took a trip to see Steve Caballero at the local skate park. 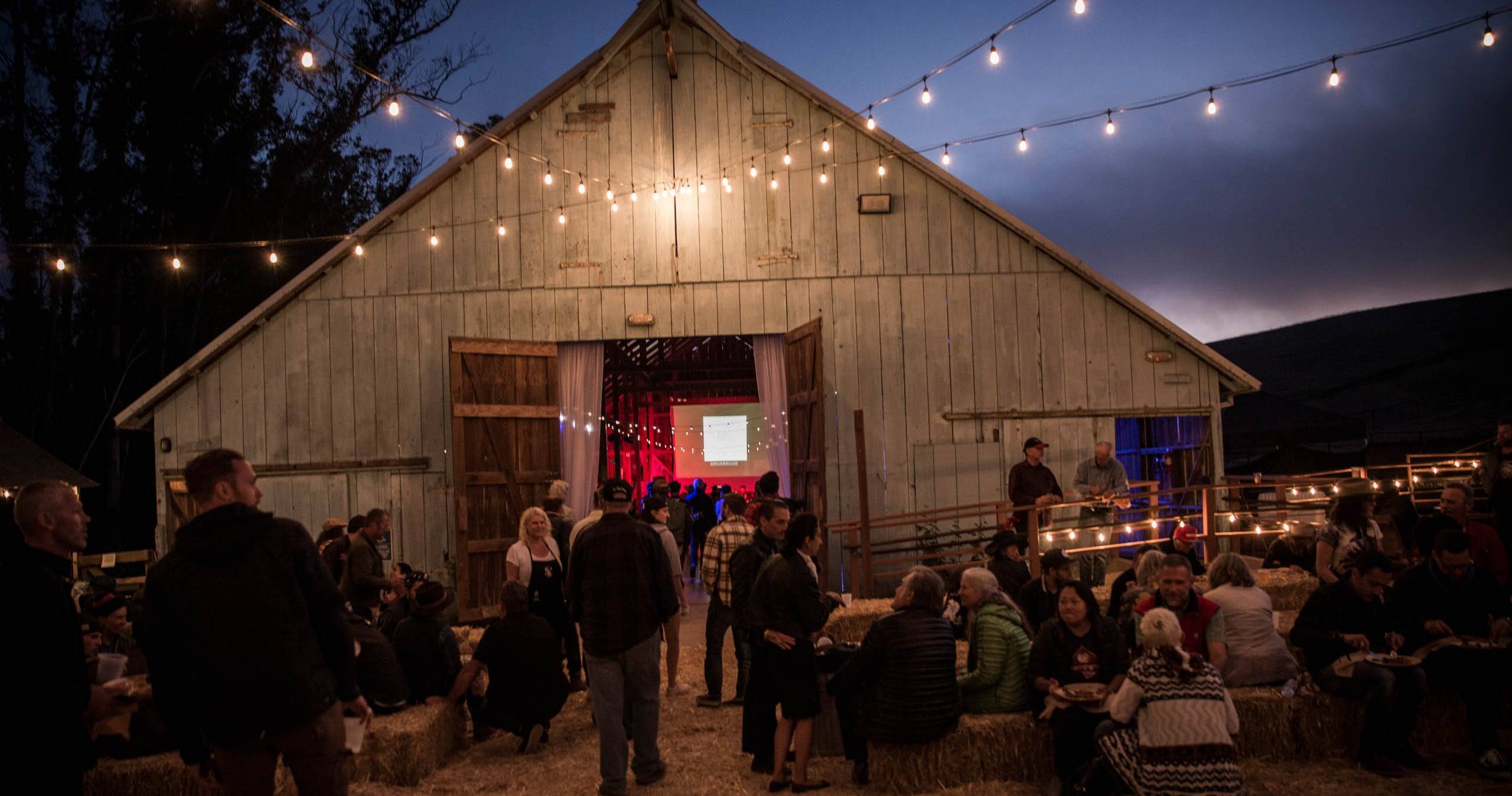 The third and final day would be the Crooked Sprint races at another secret location. The ride out to the the landing strip would once again take us through the back roads and now I got to ride my RSD Ducati Scrambler! On the ride out I met a group of women riding a variety of old vintage bikes, it was so great to see bikes from the 1930’s to the 1960’s out on the road and ridden by women. This event is awesome, and I was happy to ride with them all the way to the final meeting place. Now today we would be going head to head in the 1/2 mile barrel race, basically a 1/4 race to some barrels, quick u-turn around and then head back. The rules were, start in neutral, left hand on your head, and when the flag drops, reach for the clutch, jam it in 1st gear, dump the clutch and then go flat-out and as fast as you can! The classes this time would be vintage, (pre 1990) and modern. I’d agreed to ride the British Customs Triumph but I also wanted to see how my own personal stock Ducati Scrambler would go, so I entered both bikes in the modern class, even though I put my $ on Roland and his Hooligan Yamaha MT09, which I’d seen rip the previous day, and knowing Mr Sands talent on 2 wheels, I thought little could stop him…. but the Revival Cycles gorgeous 200HP+ BMW just might….. Having really enjoyed watching the Vintage class fight it out, and a Husband and Wife go head to head in the flight for third (And yes, the husband gave her no mercy) I was really looking forward to seeing what these modern bikes could do. My races was against a custom Ducati Scrambler, a Harley Davidson Dyna, an RSD Indian Scout, BMW 9T, Revival Cycles speed machine and then…. I met Roland in the semi-final....Great, just the man I have my money on…. Now it was then a head to head with a friend, drinking partner and now rival…..hmmm this should be fun! After a quick burnout on my Ducati Scrambler I was ready to go, the flag-girl got us all ready, my hand was on my head and as soon as I saw her flinch, it was GO. I was into 1st gear and blasted off as quick as I could…..we both made good starts, but Roland’s superior power of the Triple MT09 flew past my Scrambler before I’d even hit 2nd gear and all I could do was try and get in his slipstream and try and catch him on the brakes and around the barrels. Roland and I braked late and he ran in deep to protect the line, so I decided to go wide, and try and square it off, see if I could get my bike under his. 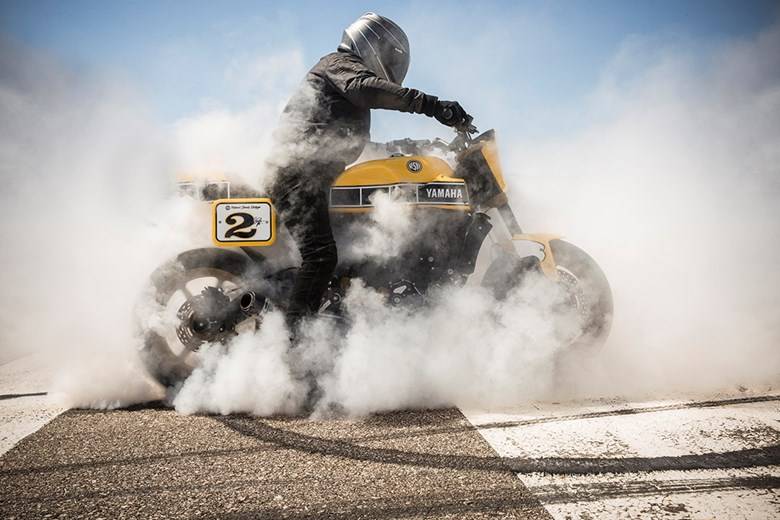 It nearly worked, but once again, as we hit the gas the Yamaha flew by and I was again playing catch up. But in true dramatic fashion Roland missed a gear-shift while looking back laughing at me, and I was able to benefit from his mistake and draft by him with about an 1/8 of a mile to go….. the line was insight…… the flag was at the ready and about 0.01 seconds before I tasted victory, Roland ripped by!! It was a brilliant race, I loved every second, and it was great to see the Hooligan Yamaha go on to take victory in the finale.

Another fun ride back to the ‘secret location’ with RSD, and David and is family from El Solitario for another barn storming evening with our two-wheeled friends, all chatting about the excellent time we’d all had at this fantastic event. Good times with friends, creating new memories and doing it all on your motorbike is why I ride. I’m thankful for the invite, I hope I get another…..in the meantime, there are more Super Hooligan races left and now I’ve got the Flat track bug… looks like it is time to weld up the steel shoe and then spoil my wife and my son on another family outing! :)

2017 marks the first edition of the Super Hooligan Coyote Flat Track race for the second edition of Wheels and Waves California. WWC is running the all-comers flat track event - we'll have vintage, inappropriate, and electric bikes circulating! The RSD Super Hooligan series presented by Indian Motorcycle will supply the serious racing, but we're all there to have fun on Santa Maria Raceway’s dirt oval. Two 1st place prizes will be supplied by Baume+Mercier watches! 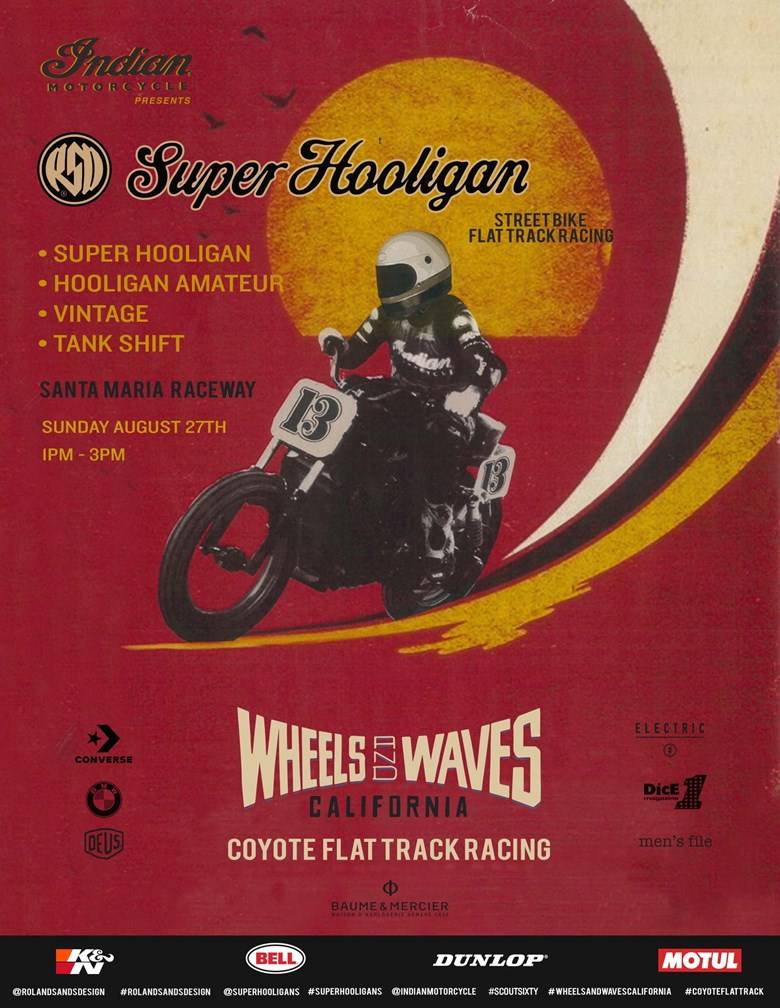 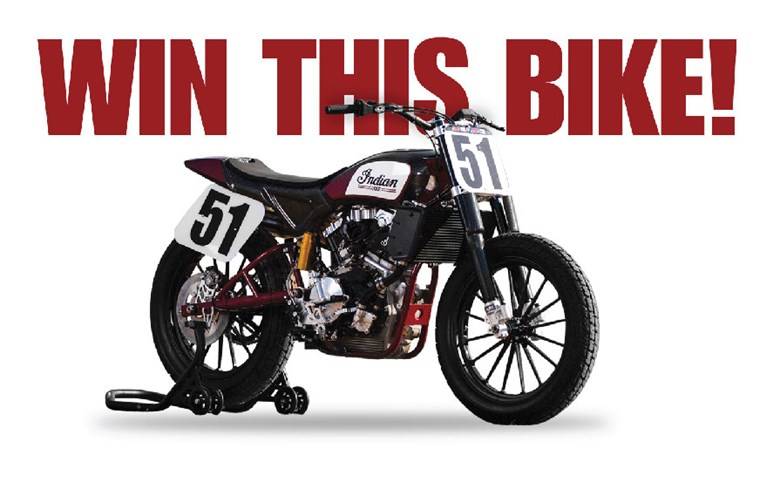